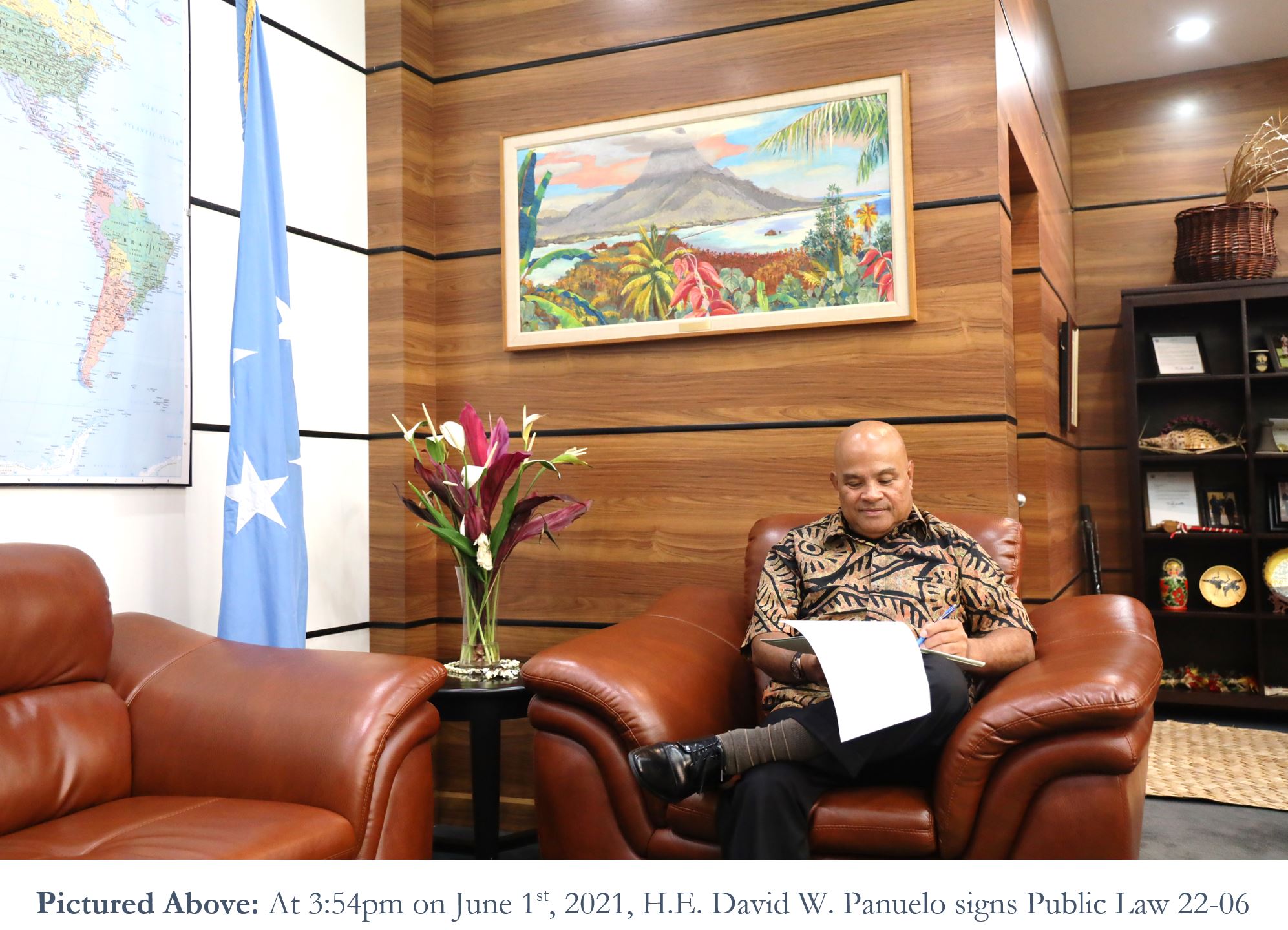 PALIKIR, Pohnpei—On June 1st, 2021, His Excellency David W. Panuelo—President of the Federated States of Micronesia (FSM)—signed Public Law No. 22-06, which amends the FSM Trust Fund Act to recognize the existential threat of Climate Change, and mandate that the investments made in the Trust Fund follow a sustainable investment policy that integrates the considerations of the risks and opportunities coming from a global transition into a lower carbon economy, such as renewable and clean energy. The FSM Trust Fund is now aligned with the Nation’s environmental values of green and low carbon investment.

The FSM Trust Fund was originally created to provide a sustainable and permanent sovereign wealth fund that can support the Nation’s financial independence. Given that Climate Change is one of the ultimate challenges of this generation—sufficiently ultimate that, if it’s not addressed, there may not be future generations—the FSM National Government is giving attention and priority to investing in renewable energy.

The amendments to the FSM Trust Fund Act will synchronize the Nation’s investment efforts with the goals of the Paris Agreement, which intends to halt and ideally reverse the adverse impacts from Climate Change.

“To summarize that we’ve done,” President Panuelo said in a statement, “To make sure that our Nation always has resources for essential services, we made a Trust Fund; however, until now, our FSM Trust Fund has focused exclusively on investing in what is profitable, without any regard to whether that profit impacts the environment or not. The practical effect is that, if we say out loud that Climate Change is an existential threat and the FSM’s number one security crisis, critics of our Nation, and anti-science Climate Change deniers, could rightfully point out that because we focused on maximizing profit, we put a financial stake for our Nation’s future on the success of oil, cement, and steel firms, among others. Our critics could rightfully say that if we’re so serious about Climate Change, then we ought to put our money where our mouth is.”

“Well, my dear fellow Micronesian citizens, that’s exactly what we’ve just done,” President Panuelo continued. “We are figuratively putting our money where our mouths are by mandating that the FSM Trust Fund focus on sustainable investment, by mandating that our financial future be intrinsically tied to our World’s environmental prosperity. In real terms, this is possibly the single greatest action our Nation has taken in fighting Climate Change thus far, as we see ourselves move away from investing in corporations that harm the environment to corporations that make peace with nature.”

“Championing the fight against Climate Change has always been one of the Panuelo-George administration’s top priorities—but it would be deeply unfair and dishonest for me to say that this enormous victory rests on my shoulders alone. At the Executive Branch, I would like to publicly applaud the Honorable Andrew R. Yatilman, Secretary of the Department of Environment, Climate Change, & Emergency Management, for demonstrating the environmental effects this legislation will have, in our Nation and abroad; I would like to publicly applaud the Honorable Eugene Amor, both in his capacity as the Chairman of the FSM Trust Fund Board and in his capacity as Secretary of the Department of Finance & Administration, for demonstrating the highly plausible economic growth we’ll see from this legislation; and I would like to publicly applaud Acting Secretary Elina Akinaga of the Department of Resources & Development, of whom I have just submitted to our Congress today my nomination to serve as the Honorable Secretary, for her tenacious devotion to developing our Nation and its resources.”

“At the 22nd FSM Congress, I would like to publicly applaud the visionary leadership of the Honorable Wesley W. Simina, Speaker of the Congress, for his resolute dedication to the needs of our citizens and our Nation. I would also be remiss if I didn’t say out loud that the Honorable Isaac V. Figir, the distinguished Senator from Yap, played an enormously supportive role in this effort. Of all the credit that one might give to me or my Cabinet, I would recommend that an equal amount—be it in the form of a handshake or simply a warm smile in his direction—be given to Senator Figir, and all the rest of the Senators in our 22nd Congress.”

We have 506 guests and no members online