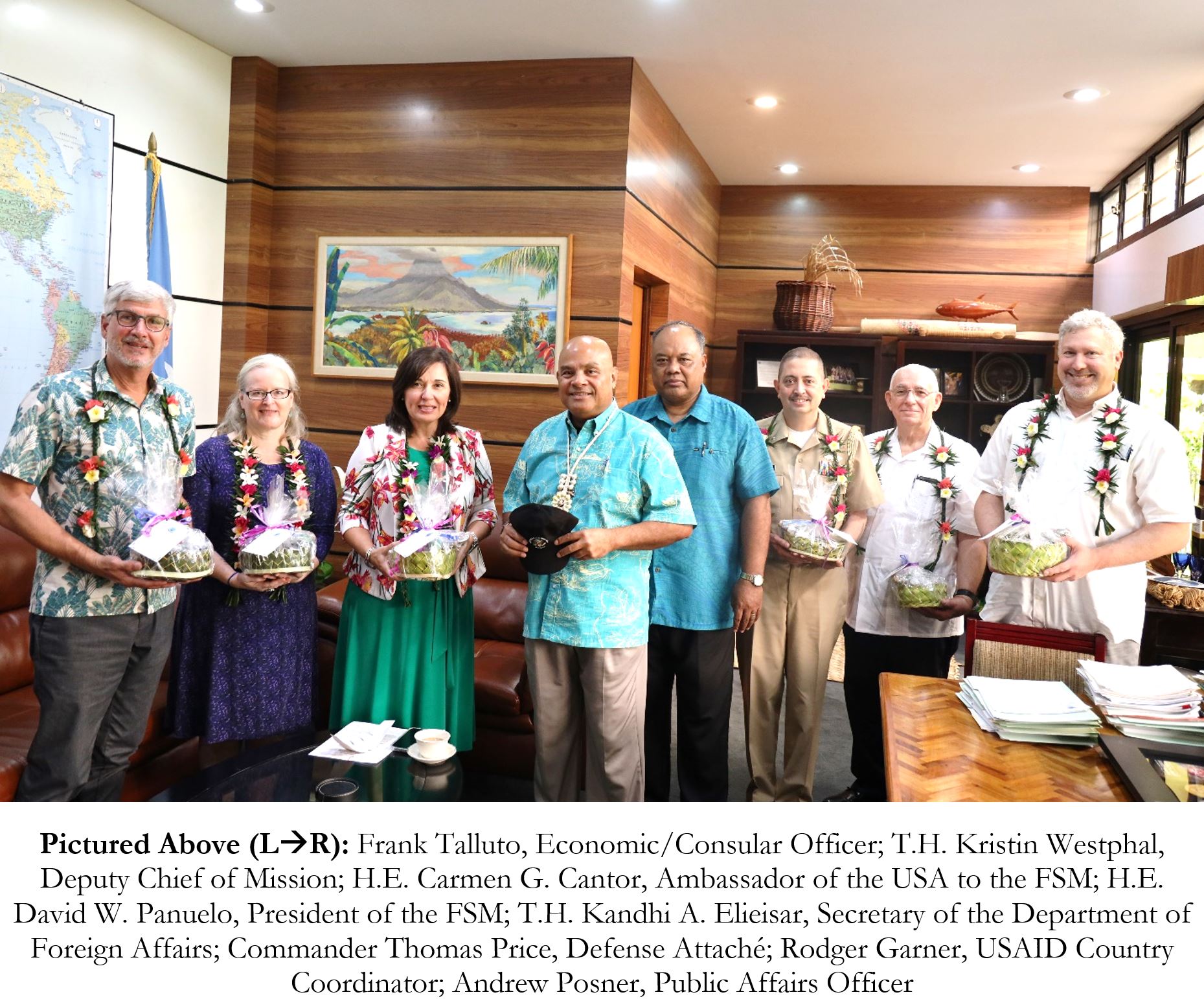 PALIKIR, Pohnpei—On June 4th, 2021, His Excellency David W. Panuelo—President of the Federated States of Micronesia (FSM)—received Her Excellency Carmen G. Cantor, Ambassador of the United States of America to the FSM, in a courtesy call. The extensive discussions covered a range of topics, from the Nation’s repatriation efforts and the recent Pacific Island Conference of Leaders (PICL) to economic and regional security issues, and the introduction of new U.S. diplomatic staff in the FSM.

President Panuelo began the meeting by thanking Ambassador Cantor, and by extension the U.S. Government, to particularly include the U.S. Centers for Disease Control & Prevention (U.S. CDC) and the U.S. Coast Guard, for the United States’ comprehensive assistance to the FSM in tackling the COVID-19 Pandemic, including the first successful repatriation effort from a COVID-19 affected jurisdiction. “I really want to say thank you,” President Panuelo said, “To you, to the [U.S. CDC], and to the Coast Guard, for making our repatriation flight in May possible.”

A meaningful portion of the meeting was devoted to introducing to President Panuelo several of the new diplomatic staff in the FSM.

Serving in the U.S. Agency for International Development (USAID), President Panuelo met Rodger Garner, who is the Nation’s USAID Country Coordinator. Mr. Garner’s presence in the FSM represents a significant accomplishment for one of the Panuelo-George administration’s goals.

Citizens may recall that on November 21st, 2019, President Panuelo had met with Sean Callahan, Deputy Mission Director for USAID based out of the Republic of the Philippines; the meeting itself was a result of the FSM’s explicit request for USAID’s permanent physical presence in the Nation.  President Panuelo requested USAID’s presence in the FSM to help ensure that the development agency, with eyes on the ground, can more directly assist with the Nation’s goals in donor coordination and health response, as well as climate adaptation, mitigation, and resiliency efforts; further, President Panuelo noted at the time the Nation’s interest in USAID support for the education sector, whether it be in the form of long-term aspirations, such as the proposed resurrection of the Pohnpei Agriculture & Trade School as a regional vocational education hub, and/or in augmentative assistance for contemporary elementary and secondary school programming at the Nation’s public schools.

Serving in the U.S. Department of Defense, President Panuelo met Commander Thomas Price, who is the U.S. Embassy’s Defense Attaché. Citizens may recall that, under Title III of the Compact of Free Association, as Amended, the FSM National Government delegates some of its defense responsibilities, where appropriate, to the U.S. Armed Forces. Thus, the Defense Attaché, as an office, and Commander Price, as a person, is tasked with assisting the FSM’s security.

“Ambassador,” President Panuelo said, “I am so happy that your office is being populated. Our enduring partnership with our first and foremost ally is dear to us, so it’s essential for our citizens to see you here, helping in our development.”

The remainder of the meeting covered an extensive array of items of mutual interest and benefit, such as tentative plans for the next Joint Committee Meeting (JCM), and the outcomes of the recent PICL.

We have 440 guests and no members online