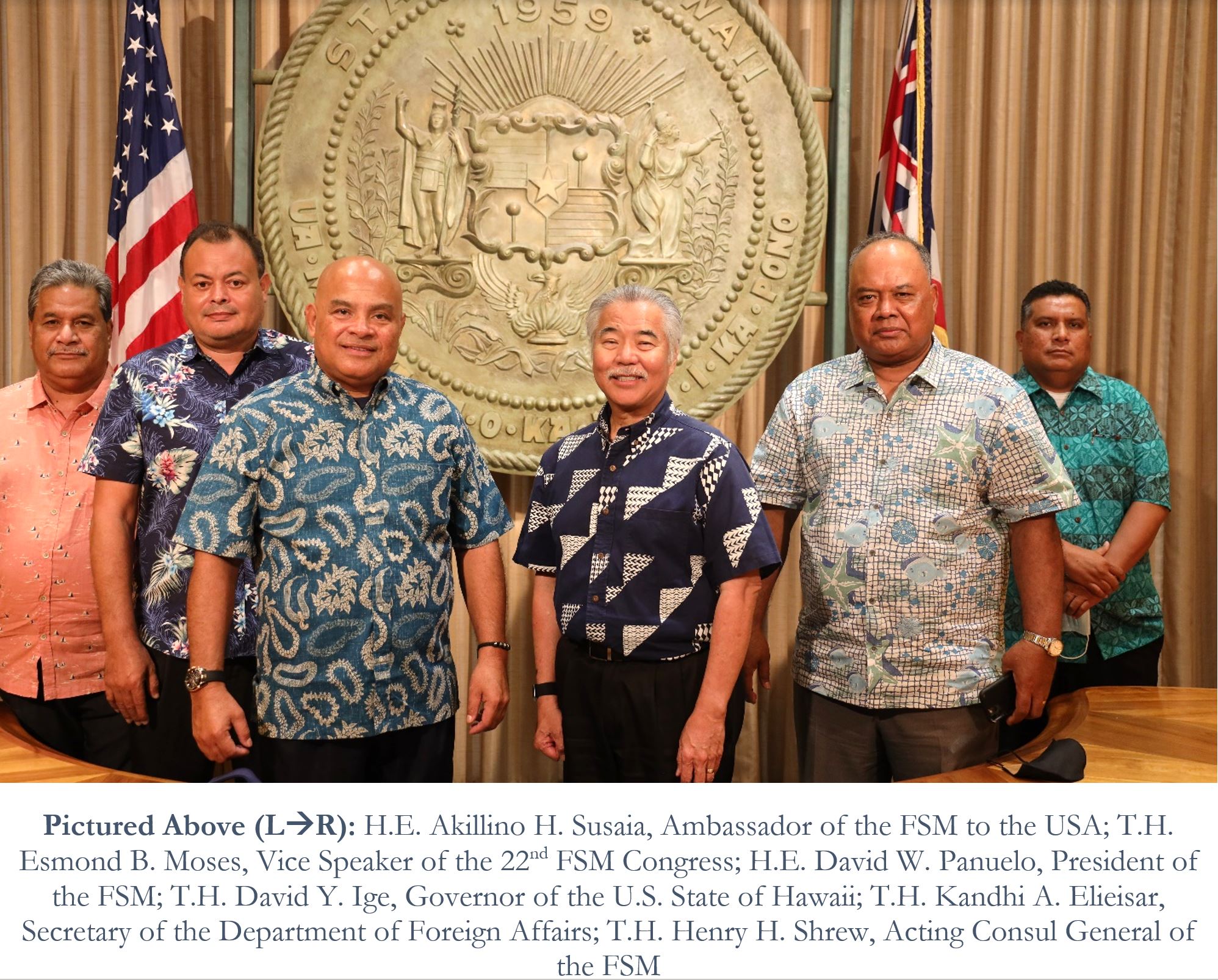 HONOLULU, Hawaii—On July 16th, 2021, His Excellency David W. Panuelo—President of the Federated States of Micronesia (FSM)—was received by the Honorable David Y. Ige, Governor of the U.S. State of Hawaii, in a courtesy call. It was President Panuelo’s intention to pay respects to the Governor upon his arrival in Hawaii, to discuss his agenda whilst in Honolulu, to inform the Governor that he will be inviting His Excellency Joseph R. Biden Jr., President of the United States of America, to open the next in-person gathering of the Pacific Island Conference of Leaders (PICL), of which the FSM is the contemporary Chair, and to ask the Governor to join the FSM in extending that invitation to President Biden in Hawaii’s capacity as the Host.

President Panuelo opened his remarks by thanking Governor Ige for the hospitality Hawaii has shown the more than 15,000 FSM citizens who call the state their home, emphasizing that Hawaii is ethnically and culturally diverse whilst retaining its unique Hawaiian and American identity. The President further noted his appreciation for the First Lady of Hawaii, Mrs. Dawn A. Ige, for her recent reception with Patricia E. Edwin, First Lady of the FSM.

Governor Ige described that FSM citizens are active and contributing members of the community, and that the Hawaii State Government has been attempting to partner with various non-government and non-profit organizations to provide better support. The Governor noted that both Hawaii and the U.S. Territory of Guam are aware of the ongoing negotiations regarding the Compact of Free Association, as Amended, between the FSM and the United States, and that there was hope that Hawaii and Guam could receive more support from the U.S. Federal Government. President Panuelo agreed.

President Panuelo described his agenda for his travel to Hawaii—the first external travel the President has engaged in since March, 2020—and that the primary focus was on FSM-US high-level defense talks, which the FSM National Government sees as crucial for ensuring the Nation’s security.

In addition to the FSM-US defense talks at the U.S. Indo-Pacific Command (INDOPACOM), President Panuelo described that he intends to meet with various friends, partners, and allies in Hawaii, such as the East-West Center, the Pacific Islands Development Program, Hawaii Green Growth (a Local2030 Hub member, of which the FSM has recently committed to joining as well), the Federal Aviation Administration, the Federal Bureau of Investigation, the Asia-Pacific Center for Security Studies, and more.

“It will be important for the FSM, and the United States, for President Biden to open the next [PICL]—which, with twenty members, is both numerically larger than the Pacific Island Forum, and covers a larger area of the planet. This is a means of showing genuine U.S. involvement and inclusiveness in the Pacific, and that whether you are a sovereign country, a territory, or a U.S. state, if you are in the Pacific then you matter, and together we can preserve a rules-based international order, and collaborate for our mutual development to ensure the Indo-Pacific Strategy of a Free & Open Indo-Pacific is a sustainable and successful reality for us all,” President Panuelo said.

President Panuelo and Governor Ige agreed that their respective staff would be meeting over the next several days to discuss the issue further; in the meantime, the President indicated he would also solicit support from INDOPACOM, East-West Center, the Pacific Islands Development Program, and Hawaii Green Growth et al. for the same purpose.

The meeting ended on a positive note, with President Panuelo again thanking Governor Ige for Hawaii’s kindness and hospitality.

We have 266 guests and no members online