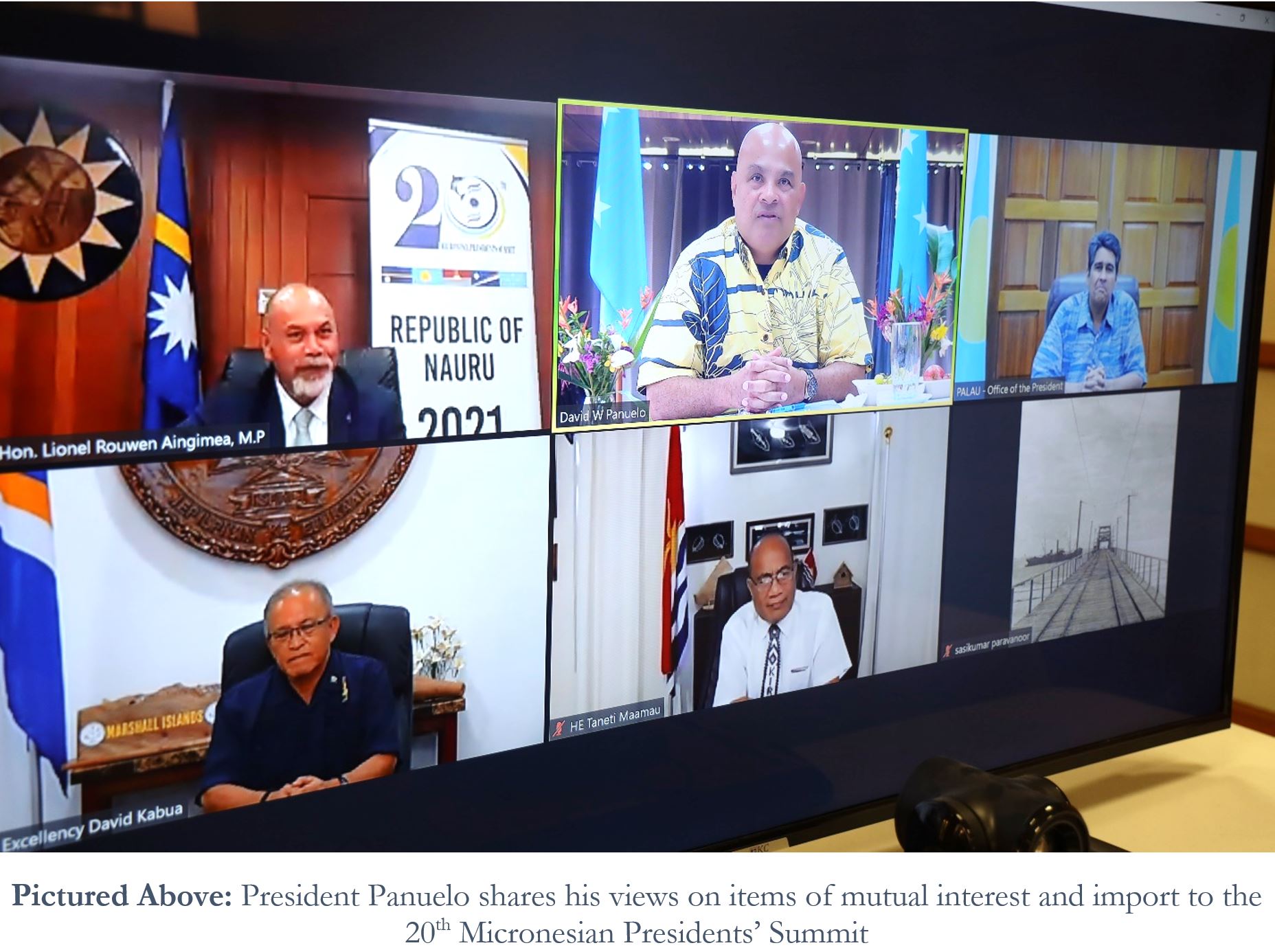 The Presidents agreed to extend the mandate of the Transport Bubble Working Group, and to actively pursue, initiate, and concretize Nauru’s and Kiribati’s membership in the Micronesian Shipping Commission.

The Presidents noted that high transportation costs and unreliable services contribute to the challenges the Micronesian subregion face in attracting trade and investment. The Presidents recognized the importance of establishing a regional network through expansion in the transport sector to ensure that MPS member countries are not susceptible to fluctuating and inflated cost, and spasmodic servicing. Officials were directed to develop initiatives in subregional shipping and air services, including the development of air services agreements among MPS member countries.

A significant element of the discussions focused on subregional security, particularly in light of the recent high-level defense talks between the Freely Associated States with the United States of America and other bilateral defense partners such as Australia. In this regard, the Presidents reaffirmed their endorsement of the Declaration on Preserving Maritime Zones in the Face of Climate Change-related Sea-Level Rise and its accompanying Aide Memoire, and recognized the value of sharing information and resources to combat transnational crime.

Arguably the most visible outcome regarding the substantial discussions on subregional security was an agreement wherein the FSM, the Marshall Islands, and Palau agreed to extend an invitation to Kiribati and Nauru to join the Micronesian Transnational Crime Unit. When juxtaposed with the FSM’s intention to join the International Police Organization (INTERPOL) by the end of 2021, and contemporary security ties between the Freely Associated States and the United States of America, including law enforcement cooperation, it is increasingly likely (and also the hope of the MPS) that illegal, unregulated, and unreported fishing threats will decrease throughout the North Pacific.

Substantial discussion occurred on the forthcoming United Nations Multi-Country Office for the North Pacific, to be hosted in the FSM. President Panuelo shared that establishing the office is on track, with an interim lease agreement of the facility already in place. President Panuelo noted that after the conclusion of the UN Virtual Mission also occurring on the same days as the MPS that FSM Government officials would liaise with the MPS to relay the latest information on the Multi-Country Office.

The Presidents spoke at length about their mutual grave concerns regarding the recent Intergovernmental Panel on Climate Change (IPCC) Report that describes how the World, through its failure in providing unity and cohesive action, is losing the war against Climate Change which remains the single greatest existential threat to each of the MPS countries and the World at large.

The Presidents directed their Foreign Affairs and Legal staff to work on the requisite legal documentation towards formalizing the legal status of the MPS, whose Secretariat shall be established in the Republic of Nauru.

At the conclusion of the 20th MPS, it was agreed that the FSM will host the 21st MPS at a date to be determined in the future. It is the intention of the FSM National Government to host the 21st MPS in conjunction with the 25th Micronesia Islands Forum (MIF). While the five sovereign Micronesian countries are all members of the MPS, the MIF’s contemporary membership includes the Freely Associated States, the U.S. Territory of Guam, the U.S. Commonwealth of the Northern Mariana Islands, and the FSM’s States of Yap, Chuuk, Pohnpei, and Kosrae as separate and distinct members.

The 20th MPS Joint Communique may be found on the Nauruan Government site here: http://naurugov.nr/media/149932/naoero_communique.pdf

The 20th MPS Joint Communique may be found on the FSM National Government site here: https://gov.fm/files/Joint%20Communiques/20th_MPS_Naoero_Communique_SIGNED.pdf

President Panuelo’s September 6th, 2021, media engagement with ABC Radio Australia on the outcomes of the 20th MPS may be found here: https://www.abc.net.au/radio-australia/programs/pacificbeat/micro-pres-iv/13528850

We have 1222 guests and no members online