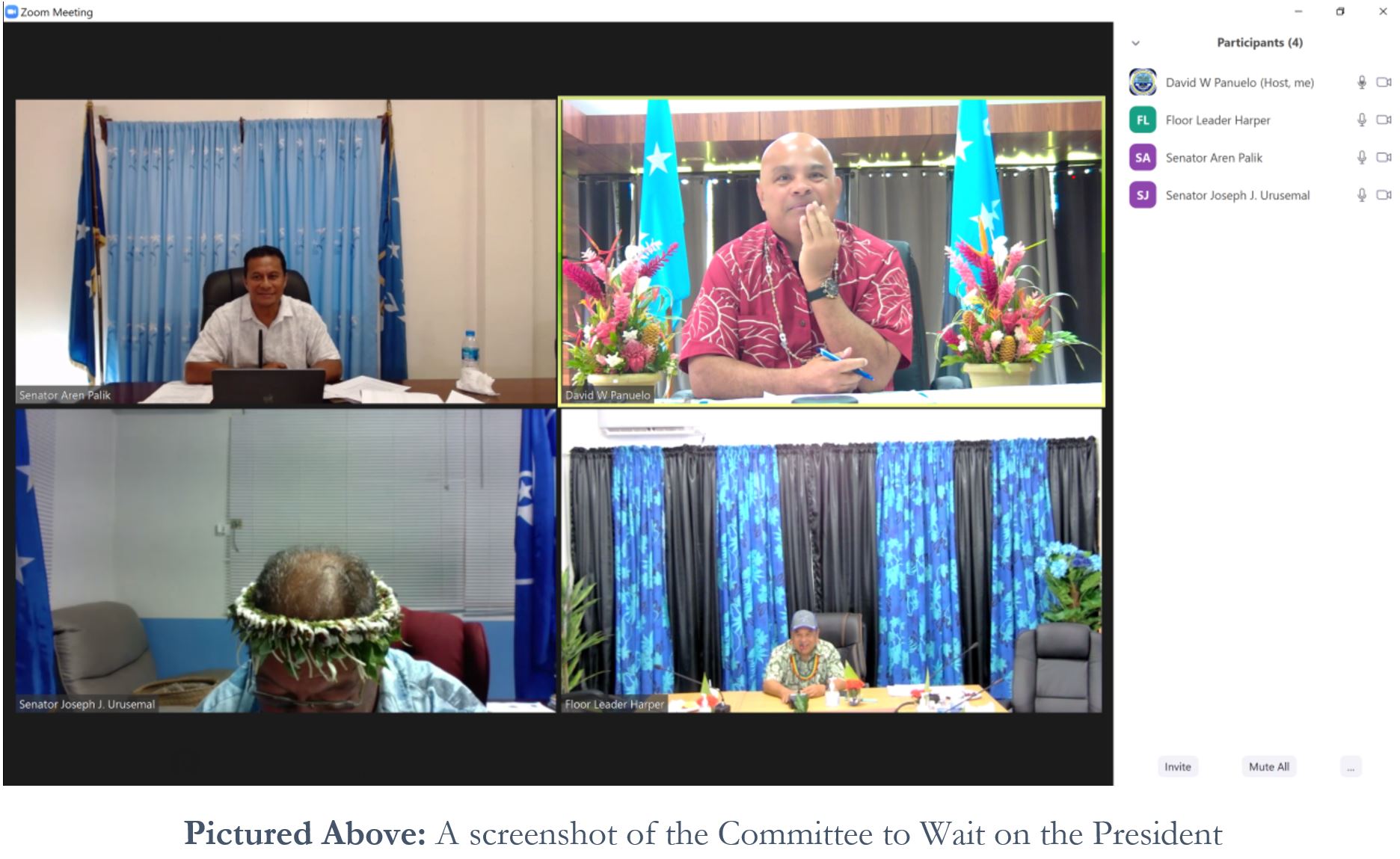 PALIKIR, Pohnpei—The 22nd Congress of the Federated States of Micronesia (FSM) began its 2nd Regular Session on September 13th, 2021 (i.e. Micronesia Clean-Up Day). After the opening session, His Excellency David W. Panuelo virtually received the Committee to Wait on the President, Chaired by the Honorable Ferny S. Perman, with committee members inclusive of the Honorable Joseph J. Urusemal, the Honorable Florencio S. Harper, and the Honorable Aren B. Palik.

The bulk of the three hours of descriptive discussion focused on both the COVID-19 Pandemic and the pending legislation the Executive Branch would appreciate for the Congress to consider.

Kosrae State intends to engage in repatriation flights on September 13th, October 4th, and October 25th. Of the 24 persons originally scheduled to return to Kosrae State on September 13th, five (5) were removed from pre-quarantine in the U.S. Territory of Guam due to either being COVID-19 positive or being a close contact of a COVID-19 positive person.

Chuuk State has suggested to the FSM National Government that it may be looking to begin repatriation flights in October.

Multiple Senators noted their concerns regarding repatriation efforts and the rise of the Delta variant of COVID-19 around the World, which is significantly more infectious than the original variant.

President Panuelo assured the Senators that the extension of pre-quarantine in the U.S. Territory of Guam to ten days, and modifications made to in-country quarantine systems in the FSM, have dramatically increased the FSM’s safety—but also noted that “This is absolutely the time to be cautious and to be vigilant”, describing that quarantine breakdowns were the result of community transmission of COVID-19 in countries like the Republic of Fiji and New Zealand, both of whom are dear friends of the FSM.

President Panuelo requested that the 22nd FSM Congress extend the Declaration of Public Health Emergency to January 31st, 2022. The President further requested that the 22nd FSM Congress extend the lifespan of the FSM Economic Stimulus Package (i.e. the Tourism Sector Mitigation Fund) for businesses to June 30th, 2022. Additionally, the President requested the Congress to appropriate approximately two million dollars ($2,000,000) to augment the FSM Social Protection Program for Low-Income Household Assistance, which is otherwise funded in whole by the generous assistance of the Asian Development Bank.

“We have had 17,700 applications for the Low-Income Household Assistance,” President Panuelo said. “So far, 5,500 households have received checks; we expect 6,500 households to have received assistance by the end of the month. $500,000 has been set aside for remote island communities that have so far been unable to apply for the program. Adding an additional two million dollars to augment the program accomplishes two tasks: the first is that it means we can assist 9,000 total households across the FSM through this program, which has a real and tangible effect on peoples’ lives during this Pandemic. The second is that we demonstrate to the Asian Development Bank and other partners that we appreciate their assistance so much that we are willing to put our own money where our mouth is.”

Regarding pending legislation for the Congress’ consideration, President Panuelo explored in detail the proposed cybercrimes bill. The President noted that the Republic of Kiribati had recently passed its own cybercrimes bill (as described in the 20th Micronesian Presidents Summit), that the FSM’s version had been produced in cooperation with the United States and other partners, and how the bill would help to ensure the FSM can meet its international commitments, either via the Micronesian Presidents Summit, through its intention to join the International Police Organization (INTERPOL) prior to the conclusion of Calendar Year 2021, and in joint operations with U.S. law enforcement.

“The fact is,” President Panuelo said, “We know of persons in the FSM who engage in cybercrime activities, like child pornography, but we do not necessarily have all the appropriate tools, methods, policies, procedures, and legal frameworks for investigating, prosecuting, and otherwise halting this type of criminal behavior. The cybercrime bill addresses this and other cybercrimes.”

The meeting concluded with the President informing Congress about positive developments on key items of national concern and interest, such as the FSM-US High-Level Defense Talks and the ongoing negotiations on the Compact of Free Association, as Amended.

We have 522 guests and no members online