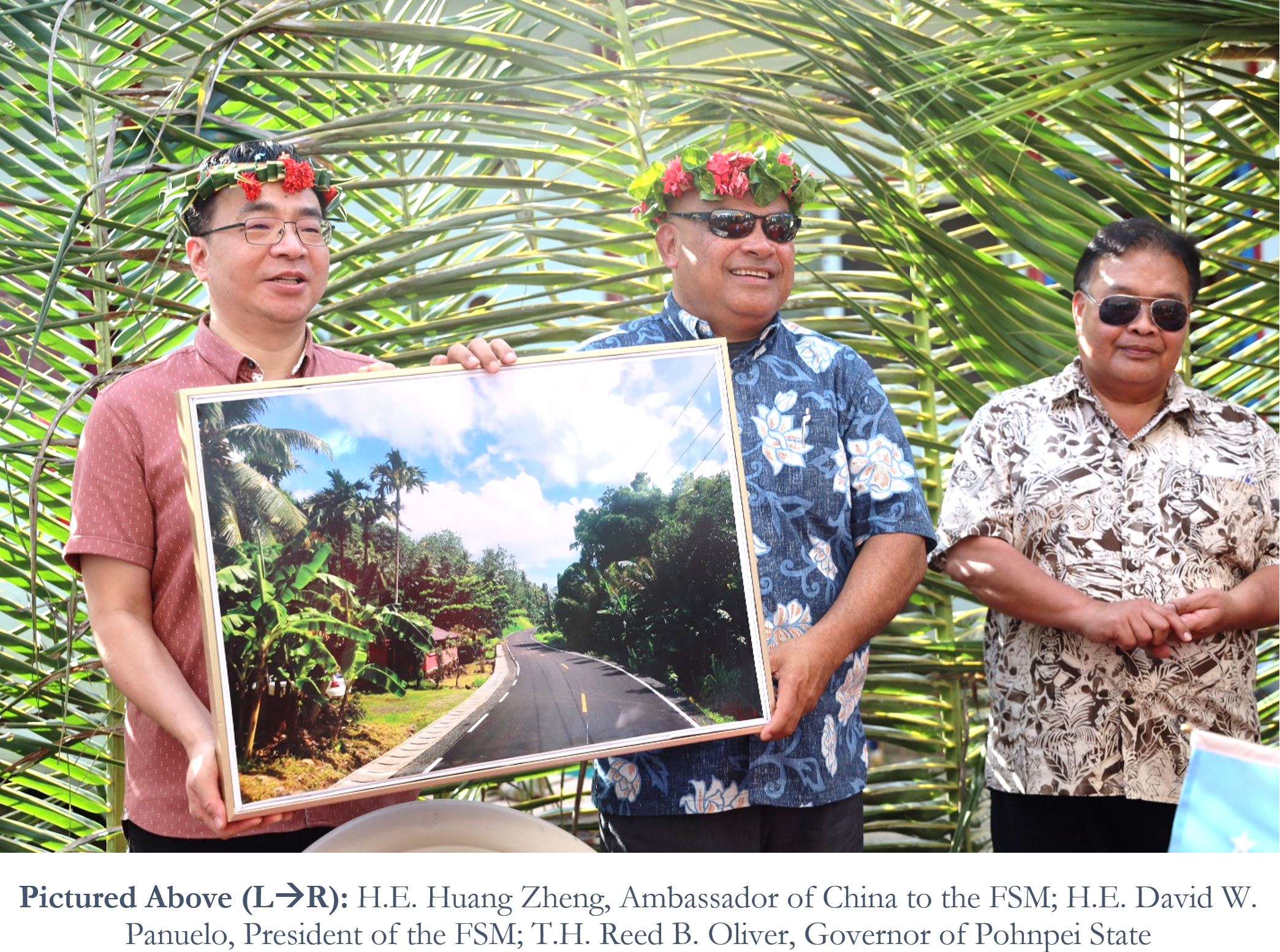 PALIKIR, Pohnpei—On September 17th, 2021, His Excellency David W. Panuelo—President of the Federated States of Micronesia (FSM)—attended the ribbon-cutting ceremony for the newly completed Pohnpei Secondary Road Project in Madolenihmw Municipality. The $14,300,000 project, generously funded by the People’s Republic of China (China), and constructed by the Chinese Railway Construction Company, is the latest example of how the 32 years of the FSM-China Great Friendship results in tangible and visible benefits for FSM citizens. Joining President Panuelo were His Excellency Huang Zheng, Ambassador of China to the FSM, the Honorable Esmond B. Moses, Vice Speaker of the 22nd FSM Congress, the Honorable Reed B. Oliver, Governor of Pohnpei State, the Honorable Stevick Edwin, Speaker of 10th Pohnpei State Legislature, and His Majesty John A. Adolph, Iso Nahnken of Madolenihmw.

The Pohnpei Secondary Road Project joins the endless list of practical construction projects funded and constructed by China, such as the Kahmar Bridge and the Chuuk State Government Complex, and will soon be followed by the completion of the forthcoming National Convention Center directly across from the Office of the President in Palikir, and renovations to the Pohnpei State Government Complex. During the week of September 20-24th, when President Panuelo will visit the State of Kosrae for a formal State Visit, one of the priority items for discussion is how Kosrae State will benefit from the recent donation of sixteen million dollars ($16,000,000) for development projects of the Nation’s choosing.

“Ambassador Huang,” President Panuelo said in a statement, “I wish to solicit China’s continued support to our Nation and for our People, for Chinese assistance stems from sincere friendship, and comes without any political strings or conditions attached. In particular, I look forward to proceeding further with more projects under my administration’s ‘Pave the Nation’ initiative.”

“Please extend to my dear friend,” President Panuelo continued, “His Excellency Xi Jinping, President of China, that Micronesia says thank you; I extend our Nation’s sincere gratitude and appreciation for this wonderful road that will serve the People of the FSM who call the State of Pohnpei and the Kingdom of Madolenihmw their home. We share the same values as China in extending peace, friendship, cooperation, and ‘building a community with a shared future for humankind.’”

The FSM National Government sincerely appreciates that China transparently adheres to its four principles of pursuing equality and win-win cooperation, honoring its word while pursuing real results, aiming at development with a focus on capacity-building, and committing to openness, inclusiveness, and mutual learning.

“The Communist Party of China is a political party that has noble feelings for the world,” Ambassador Huang said in his statement. “Under the guidance of Xj Jinping Thought on Diplomacy, the Communist Party of China always takes making new and greater contributions to mankind as its mission, and is committed to fulfilling its responsibility as a major country to promote human progress. China remains firm in pursuing an independent foreign policy of peace, advocates and actively promotes the building of a community with a shared future for humanity, and contributes by offering Chinese wisdom and solutions to global issues, such as poverty reduction and Climate Change.’

From major infrastructure projects that benefit the average citizens’ life on a daily basis, such as the Pohnpei Secondary Road Project, to technical capacity-building efforts to improve the Nation’s ability to sustain itself, the FSM is stronger and more resilient because of its Great Friendship with the People and Government of China.