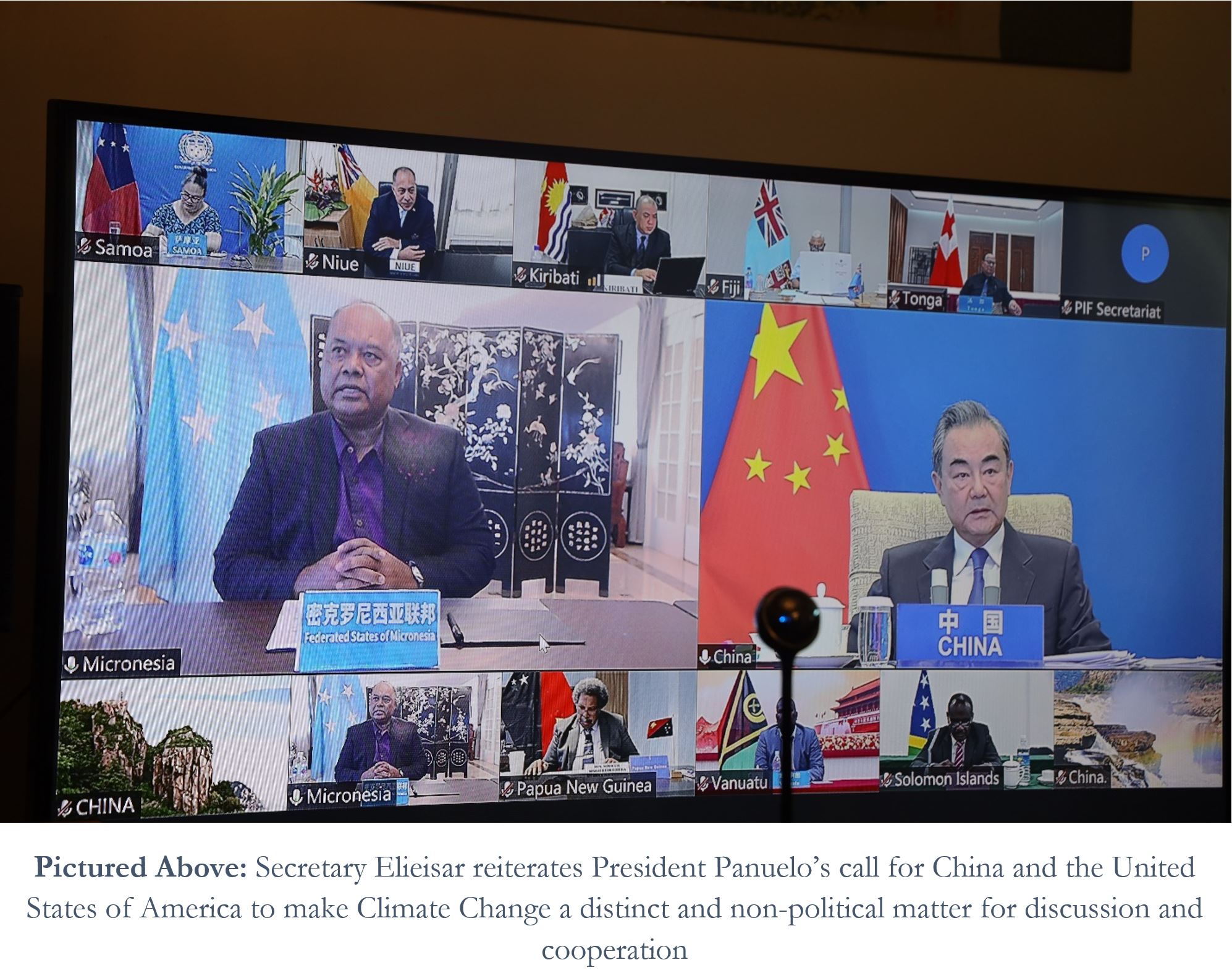 PALIKIR, Pohnpei—On October 21st, 2021, the Honorable Kandhi A. Elieisar—Secretary of the Department of Foreign Affairs of the Federated States of Micronesia (FSM)—attended the inaugural China-Pacific Island Countries (PICS) Foreign Ministers Meeting. Joined in person by His Excellency Huang Zheng, Ambassador of China to the FSM, and virtually by most of the Foreign Ministers of the PICS with diplomatic relations with China, Secretary Elieisar spoke on the Nation’s Great Friendship with the People and Government of China, and reiterated President Panuelo’s call for all countries—to include China, the United States of America, Japan, and Australia—to make Climate Change a distinct and non-political matter for discussion and cooperation with all countries in the World.

The inaugural Foreign Ministers Meeting between China and Pacific Island Countries is regarded as a success, and the FSM National Government looks forward to, and advocates for, frequently scheduled iterations of the forum on an annual basis. This release intends to summarize the most crucial points of the meeting as considered by the FSM National Government, and concludes with the Nation’s statement in full.

The first speaker of the meeting was the Honorable Wang Yi, China’s Foreign Minister, who provided opening remarks, including that China aims to build a new multi-lateral dialogue platform for greater policy communication, such as to ensure strengthened cooperation in economy, trade, investment, infrastructure, telecommunications, forestry, fishery, and other fields.

Arguably of most interest and import to citizens of the FSM is that China will establish a China-PICS Climate Action Cooperation Center to support island countries in tackling Climate Change. Additionally, Foreign Minister Wang described the expansion of people-to-people exchanges in areas such as health, education, sports, and scholarships for study in China.

The second speaker of the meeting was His Excellency Taneti Maamau, the President of the Republic of Kiribati—a fellow member of the Micronesian Presidents Summit—who also serves as Kiribati’s Foreign Minister. Of most interest to FSM citizens, President Maamau spoke of China and Kiribati’s mutual commitments for full and effective implementation of the Paris Agreement.

The third speaker was the Honorable Josaia Voreqe Bainimarama, Prime Minister and Foreign Minister of the Republic of Fiji. Prime Minister Bainimarama spoke at length about mutually shared concerns regarding the COVID-19 Pandemic, including its relationship with loss of life and economic decline, noting that if countries work together that we can collectively build back better. Prime Minister Bainimarama described the importance of the 2030 Agenda for Sustainable Development, and—in the view of the FSM National Government—virtually pleaded for a global response to the existential threat of Climate Change.

The fourth speaker was the Honorable Pohiva Tu’i’onetoa, Prime Minister of the Kingdom of Tonga. The Prime Minister commended China’s leadership role in responding to the COVID-19 Pandemic, welcomed global economic development cooperation, and spoke about Tonga’s interests in food security and clean energy development.

The fifth speaker was the Honorable Dalton Tagelagi, Premier of Niue. Premier Tagelagi emphasized that COVID-19 remains a threat to PICS, thanked China for its ongoing and sincere support to Pacific Islands, and the great importance of the Belt & Road Initiative (BRI) to fully promote the sustainable development of Pacific peoples.

The sixth speaker was the Honorable Soroi Eoe, Papua New Guinea’s Minister of Foreign Affairs & International Trade. Foreign Minister Eoe called for increased Chinese investment in Papua New Guinea and the Pacific region as a whole, in sectors ranging from tourism, fisheries, and extractive industries sector, including energy, infrastructure, and special economic zones in Papua New Guinea and other parts of the Pacific. Foreign Minister Eoe commended China for taking actions to reduce CO2 emissions, and noted that Papua New Guinea recognizes multi-lateral issues discussed at multi-lateral forums, including support for the United Nation’s Universal Declaration of Human Rights and the threat of Climate Change.

The seventh speaker was the Honorable Marc Ati, Vanuatu’s Minister of International Cooperation and External Trade. Minister Ati congratulated China for its extensive cooperation with PICS, including assistance in acquiring COVID-19 vaccines, and called for urgent action taken at all levels for effective implementation of the Paris Agreement. Minister Ati commended China for its announcement of a Climate Change Action Cooperation Center to assist PICS in improving capacity to tackle Climate Change under the framework of South-South cooperation and the 2030 Agenda for Sustainable Development.

The eighth speaker was the Honorable Kandhi A. Elieisar, Secretary of the Department of Foreign Affairs of the FSM. In recognition of the FSM’s limited delegation at the forthcoming 26th Conference of Parties meeting in Glasgow, Scotland, the key idea of the FSM’s statement focused on the existential threat of Climate Change, and the Nation’s request for all countries in the world—including China, the United States of America, Australia, and Japan—to work together in making Climate Change a distinct and non-political matter for discussion and cooperation.

The ninth speaker was the Honorable Jeremiah Manele, Minister of Foreign Affairs and External Trade of Solomon Islands. Minister Manele registered deep appreciation to the People and Government of China for being the first country to respond to their calls for COVID-19 assistance, ranging from vaccines to medical supplies and equipment. Minister Manele noted Solomon Islands’ appreciation for China’s infrastructural assistance to their country, particularly as they prepare to host the 2023 Pacific Games. Solomon Islands vocalized support for China’s intentions to assist with Climate Change and poverty reduction (support which the FSM shares but did not explicitly vocalize in its statement).

Foreign Minister Wang of China provided the closing remarks, reiterating that the modernization of China would not only advance human progress but also bring opportunities for developing countries. Foreign Minister Wang noted that China will make more efforts to support the Blue Pacific Strategy, and that China will strengthen cooperation with PICS to completely defeat COVID-19 and tackle challenges such as Climate Change and marine environment protection.

The FSM National Government agrees in principle with the bulk of the jointly stated outcomes stemming from the inaugural China-PICS Foreign Ministers Meeting, and views the annual formation of the China-PICS Foreign Ministers Meeting as an amplification of the FSM-China Great Friendship. The outcomes can be seen on China’s Ministry of Foreign Affairs website here: https://www.fmprc.gov.cn/mfa_eng/zxxx_662805/t1915970.shtml

“On behalf of the People and Government of the FSM,” His Excellency David W. Panuelo, President of the FSM, said in a statement following the China-PICS Foreign Ministers Meeting, “I emphasize again our Nation’s extension of peace, friendship, cooperation, and love in our common humanity to the People and Government of China, with whom we share a Great Friendship. The FSM appreciates China’s technical and economic cooperation support, and deeply looks forward to China’s establishment of a Climate Change Action Cooperation Center. As Climate Change is an existential threat to humanity, with the threat projection being total civilizational collapse within our children’s lifetimes, Micronesia urges China to work together with the United States of America in making Climate Change a distinct and non-political matter for discussion and cooperation with all countries in the World. Neither China nor the United States can fix Climate Change alone, but if our two allies work together, convincing other allies like Australia to come on board, and friends like Brazil to do more, we can still save humanity.”

Statement by the Honorable Secretary Kandhi A. Elieisar

On the Occasion of the Inaugural China-PICs Foreign Ministers Meeting

It gives me great pleasure to extend, on behalf of His Excellency David W. Panuelo, President of the Federated States of Micronesia, warm greetings from our beautiful islands. This inaugural Foreign Ministers Meeting between Pacific Island Countries and the People’s Republic of China is a testament of the importance and value that we collectively hold for our bilateral and multilateral relationships with one another. The Federated States of Micronesia, which shares a Great Friendship with the People’s Republic of China, believes strongly in the importance of the global community extending to everyone peace, friendship, cooperation, and love in our common humanity.

At the outset, I would like to reiterate President Panuelo’s request at the 76th United Nations General Assembly: that the global community must look past what separates us, and focus on what unites us. In this respect, the existential threat of Climate Change threatens to cause civilizational collapse within our children’s lifetimes. As President Panuelo has said, Micronesia urges China to work together with the United States of America in making Climate Change a distinct and non-political matter for discussion and cooperation with all countries in the World. The forthcoming 26th Conference of Parties in Glasgow represents the last best hope for humanity to save itself, and as such it is absolutely necessary for our friends, allies, and development partners to work together in preventing the loss of life through what would otherwise be total economic and ecological devastation.

Preventing the loss of life is thankfully one of China’s premier qualities. Micronesia is thankful for China’s support throughout the COVID-19 Pandemic, including its donation of containerized isolation units, personal protective equipment, and technical support and guidance. Our Nation remains COVID-19 free in large part due to cooperation and support from ours friends, allies, and development partners, including the U.S. Centers for Disease Control & Prevention, the World Health Organization, and the People and Government of China, among others. We thank China again for its support in this.

Micronesia also appreciates China’s ongoing respect for our Nation’s development needs. Only a month ago, we saw the opening of the Madolenihmw Secondary Roads project in Pohnpei State, and recent years have seen key infrastructure projects such as the Chuuk State Government Complex. It is a sign of China’s genuine respect for its neighbors and partners that Chinese assistance to Micronesia is in the form of grants, not loans, which signals to the rest of the World that Chinese aid comes sincerely and with no strings attached.

Meanwhile, your Excellencies, the practical reality is that—as Micronesia’s borders remain closed due to the COVID-19 Pandemic—many of our ongoing and forthcoming development projects, such as the construction of our National Convention Center and renovations to the Pohnpei State Government Complex, have been delayed. While Micronesia respects the bidding process that China has for its aid assistance, we recommend and request at this time for China’s favorable consideration to encourage companies that are already on the ground in our islands to carry out projects that are within their abilities. Such creative solutions will not only ensure that projects are completed on time, but would also be cost-effective given the very expensive mobilization cost of machines, personnel, and logistics required.

I am pleased to take this opportunity to reaffirm, and reassure, that Micronesia has shared a Great Friendship with China for more than 32 years, based on the bedrock of the One-China policy, and mutually shared values such as peace, unity, and liberty, and mutual respect for territorial integrity.

In this regard, I wish to highlight that President Panuelo, like other Heads of Government and Heads of State across the Pacific, has recently put forward a formal Declaration on Preserving Maritime Zones in the Face of Climate Change-related Sea-Level Rise, which has been affirmed by both the Micronesian Presidents Summit and the Pacific Islands Forum. The Declaration proclaims that maritime zones, and the rights and entitlements that flow from them, shall continue to apply, notwithstanding any physical changes connected to Climate Change-related Sea-Level Rise. Micronesia joins other Pacific Island Countries in seeking global support for the Declaration, including support from China, as the Declaration’s views as expressed are supported by both the United Nations Convention on the Law of the Sea, and the other legal principles underpinning it.

Your Excellencies, in closing, please accept my sincere congratulations for the successful hosting of this inaugural Foreign Ministers Meeting between Pacific Island Countries and China. The Federated States of Micronesia appreciates its Great Friendship with China, and fora such as this complements nicely with our China-Pacific Economic Development and Cooperation Forum. I look forward to the opportunity where we can all meet in person, and engage with each other more closely.

We have 1289 guests and one member online