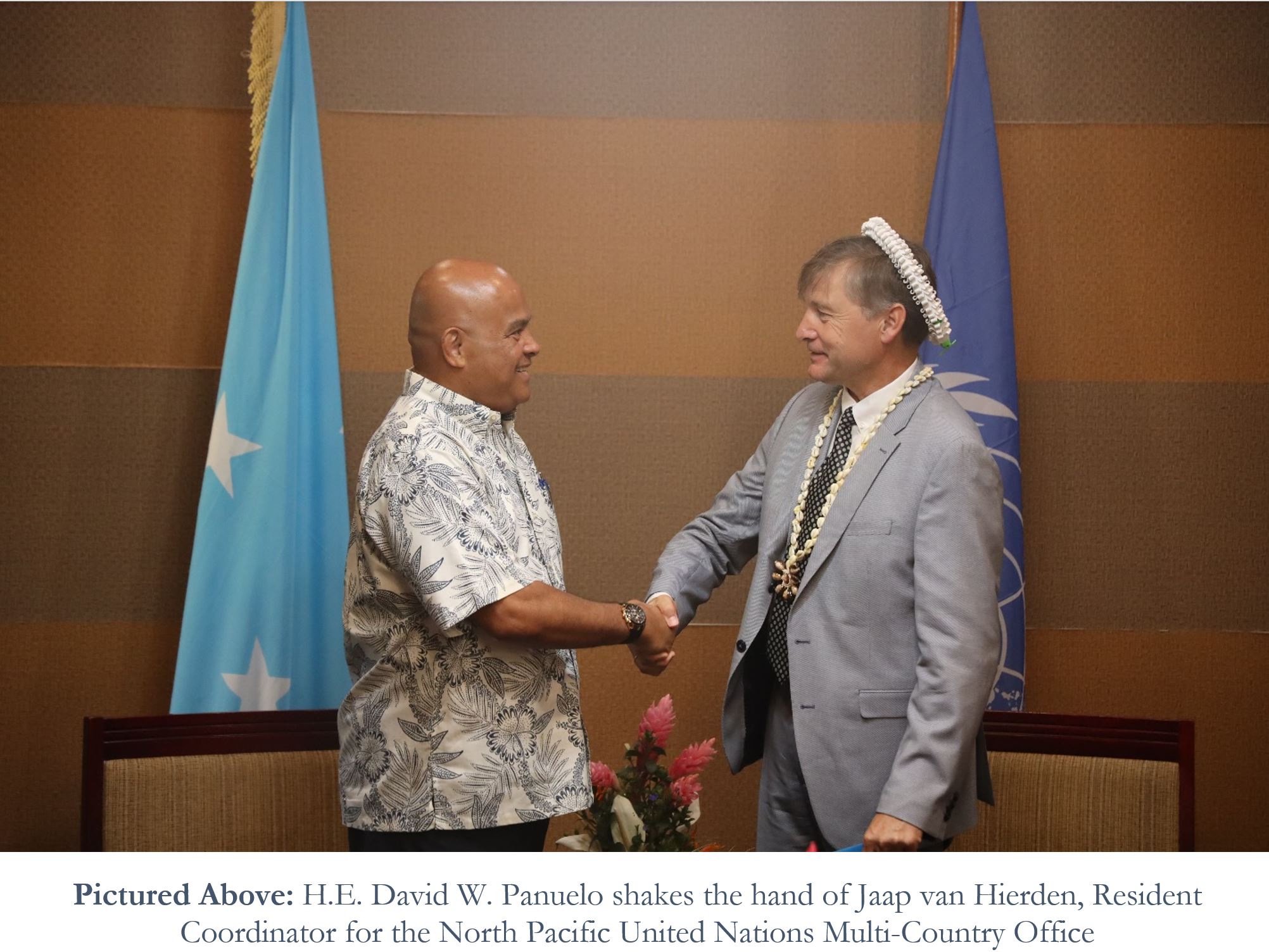 PALIKIR, Pohnpei—On November 22nd, 2021, His Excellency David W. Panuelo—President of the Federated States of Micronesia (FSM)—received the Honorable Jaap van Hierden, the Resident Coordinator for the new United Nations Multi-Country Office for the North Pacific. The President received Resident Coordinator van Hierden’s Letter of Appointment, and the two engaged in a substantive conversation on the North Pacific and the United Nations’ role in it.

In his remarks, Resident Coordinator van Hierden noted that “This is the first United Nations Multi-Country Office to open in twenty years…and so it is extremely special.” Mr. van Hierden correctly noted that the North Pacific has been working more than fourteen years for this representational office, and commended the FSM for maintaining its COVID-19 free status. “You have kept your country safe, and this is something to be really commended upon. I cannot tell you how joyful I am.”

In his remarks, President Panuelo spoke on the history behind the North Pacific’s unity, including the unity on advocating for a United Nations Multi-Country Office, and the deep and sincere appreciation the FSM has for the office’s opening. The President noted that the FSM, and the North Pacific more generally, remains COVID-19 free in part due to technical assistance and cooperation from the World Health Organization, alongside other partners such as the United States of America.

President Panuelo described at length the urgency behind taking action on Climate Change, and cited concerns on behalf of the FSM—and arguably the North Pacific at large—regarding the outcomes of the recent COP26 in Glasgow, Scotland, where there was substantial focus on language use, such as whether or not coal should be phased out or phased down, and perhaps not enough focus on practical actions for countries to take moving forward.

All throughout his remarks, however, President Panuelo emphasized the Nation’s utmost joy for the new United Nations Multi-Country Office, and the arrival of Resident Coordinator van Hierden. “This is a milestone achievement. We are grateful that you are here,” President Panuelo said, “Be assured that the FSM warmly welcomes you into our country and our region, and that the FSM National Government will do everything in its capacity to help ensure that your office is able to help leverage partnerships and innovation in Climate Change adaptation, social development, and inclusive, sustainable economic growth.”

“I would like to encourage you to work closely with the relevant entities—the steering committee, the other Micronesian Presidents, and our island societies—to ensure that we maximize benefits for our countries,” President Panuelo said.

While presently the United Nations Multi-Country Office temporarily operates out of existing infrastructure, President Panuelo and Resident Coordinator van Hierden brainstormed about the need for granting an appropriate parcel of land, and the construction of a dedicated building (or group of buildings), for the office to operate effectively long-term. President Panuelo noted, and wished to emphasize for the purpose of this release, that the permanent United Nations Multi-Country Office in the North Pacific would ideally be carbon-neutral or carbon-negative in its operations, and that the design of the structures and rooms should be equally complementary to traditional and culturally appropriate designs from the across the FSM, Palau, the Marshall Islands, Nauru, and Kiribati.

After the formal discussions, President Panuelo said in a statement that “The FSM National Government has full trust and confidence in Jaap van Hierden to lead the new United Nations Multi-Country Office and their work of providing tailor-made, demand-driven support to the five sovereign Micronesian countries. Mr. van Hierden has more than thirty years of development, peacebuilding, and humanitarian assistance experience in countries ranging from Afghanistan and Cambodia to Denmark and Sierra Leone. I encourage all National, State, and Non-Government agencies and officials to see Mr. van Hierden and his team as a partner and ally in our collective efforts towards eradicating poverty, discrimination and exclusion, and reducing inequalities and vulnerabilities that leave people behind.”

We have 1287 guests and no members online