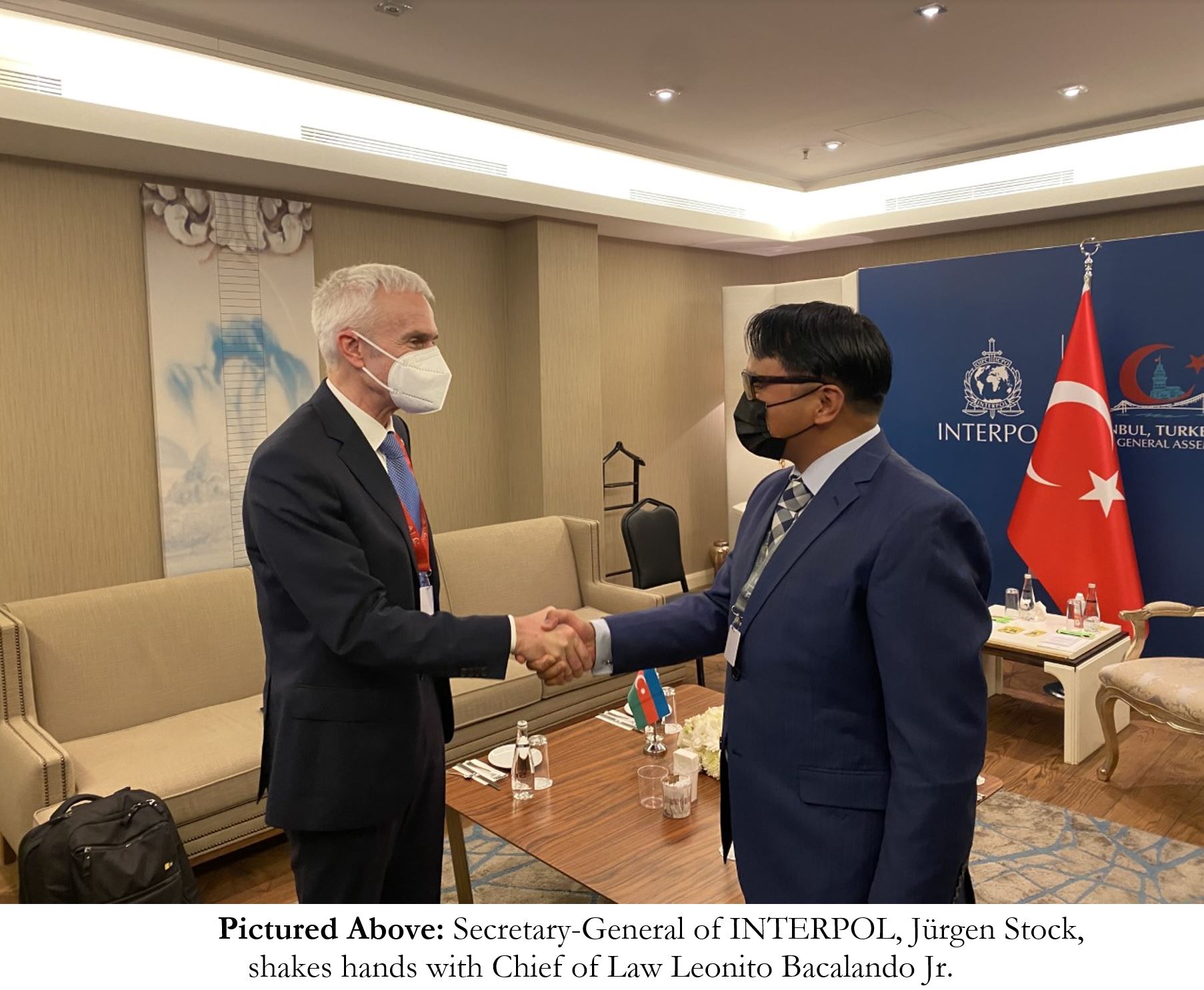 The vote occurred on the first day of the 89th General Assembly of INTERPOL, where the FSM is represented by Assistant Attorney General & Chief of Law, Leonito Bacalando Jr., Assistant Secretary & Chief of the FSM Cybersecurity & Intelligence Bureau, Adam Caldwell, and Department of Justice Legal Attache & Legal Adviser to the FSM Permanent Mission to the United Nations, Clement Yow Mulalap.

A politically neutral entity, INTERPOL’s primary aims—described in Article Two of its constitution—are “to ensure and promote the widest possible mutual assistance between all criminal police authorities within the limits of the law existing in different countries, and in the spirit of the Universal Declaration of Human Rights.”

“I am deeply humbled and honored by the international community’s vote to grant our Nation membership into INTERPOL,” President Panuelo said in a statement. “The FSM is committed to the rule of law and the international rules-based order. By joining INTERPOL, the FSM, the Micronesian subregion, and the whole of the Indo-Pacific more generally, just became safer today than it was yesterday.”

“On behalf of the People and Government of the FSM, I extend our appreciation to the President and to the Secretary-General of INTERPOL, and to all of INTERPOL’s members. I enthusiastically and categorically announce our Nation’s promise to uphold INTERPOL’s values, to live up to its mission statement, and to be a model example of a good partner.”

The FSM’s statement at INTERPOL’s 89th General Assembly, as delivered by Assistant Attorney General Bacalando, is below in full.

My humble respect to you and everyone here.  Thank you for this opportunity.

On behalf of the Federated States of Micronesia, on this historic occasion of our young nation, the FSM is indeed very grateful for the invitation to be part of this important assembly, on the occasion of its 89th General Assembly of the International Criminal Police Organization, or the INTERPOL, here in Turkey, in which Micronesia’s efforts and application to join this august body as a member is considered.

I convey the warmest greetings and congratulations by the President of the Federated States of Micronesia, H.E. President David W. Panuelo, for your excellent leadership of the INTERPOL since your election as INTERPOL President in 2018. President Panuelo wishes to convey his gratitude and appreciation to you, President Kim, to the Secretary General, to the Members of the Executive Committee of INTERPOL, and all of you, Excellencies, for your full support and warm welcome extended to Micronesia.

The Federated States of Micronesia abbreviated (FSM), or simply Micronesia, is an island country in Oceania. It consists of four states – from west to east, Yap, Chuuk, Pohnpei and Kosrae – that are spread across the western Pacific. Together, these states comprise around 607 islands (a combined land area of approximately 702 square kilometers or 271 square miles) that cover a longitudinal distance of almost 2,700 km (1,678 mi) just north of the Equator. They lie northeast of Indonesia and Papua New Guinea, south of Guam and the Marianas, west of Nauru and the Marshall Islands, east of Palau and the Philippines, about 2,900 km (1,802 mi) north of eastern Australia, 3,400 km (2,133 mi) southeast of Japan, and some 4,000 km (2,485 mi) southwest of the main islands of the Hawaiian Islands.

While the FSM's total land area is quite small, the country's waters occupy more than 2,600,000 square kilometers (1,003,866 sq mi) of the Pacific Ocean, giving the country the 14th largest exclusive economic zone in the world. The sovereign island nation's capital is Palikir, located on Pohnpei Island, while the largest city is Weno, located in the Chuuk Lagoon, a world-known diving haven.

The FSM formed its own constitutional government on May 10, 1979, and became a sovereign state after independence was attained on November 3, 1986, under a Compact of Free Association with the United States of America. Other neighboring island entities, and also former members of the Trust Territory of the Pacific Islands, formulated their own constitutional governments and became the Republic of the Marshall Islands (RMI) and the Republic of Palau (ROP). The FSM has a seat in the United Nations and has been a member of the Pacific Community since 1983.

Micronesia is a Big Ocean State with vast maritime zones covering an area of over one million square miles in the Western Pacific Ocean.  Micronesia connects Asia and the Pacific Ocean, vice versa, and further beyond.

Micronesia has some of the richest biodiversity in the world, with abundant fisheries resources. Foreign fishing vessels from different continents including Asia, in particular, engage in commercial harvesting of tuna and other fisheries resources in our exclusive economic zone.

Micronesia respects the peaceful use of ocean resources, facilitating international trade and commerce in our exclusive economic zone. In this respect, it is our interest to ensure that any commercial activities in our maritime zones are free from illegal activities, transnational crimes, and threats to peace and the rule of law.

I speak with enormous pride, and at the same time a profound sense of humility, that in the history of Micronesia, it stands shoulder to shoulder with its friends and partners around the world in the area of policing and global efforts of combatting terrorism, cybercrime, and organized crime.  As a member of the international community, Micronesia welcomes the cooperation of its partners around the globe in the fight against criminality and some of the major challenges facing our nation in particular. We are also motivated by the same spirit clearly echoed by the highest law of our land and I quote:

“we affirm our common wish to live together in peace and harmony, to preserve the heritage of the past, and to protect the promise of the future……We extend to all nations what we seek from each: peace, friendship, cooperation, and love in our common humanity.  With this Constitution we, who have been the wards of other nations, become the proud guardian of our own islands, now and forever….. we respect the diversity of our cultures. Our differences enrich us.  The seas bring us together, they do not separate us. Our islands sustain us, our island nation enlarges us and makes us stronger.”

We came here to extend to this General Assembly, what we seek from each of you…PEACE, FRIENDSHIP, COOPERATION AND LOVE IN OUR COMMON HUMANITY, with all due respect to the diversity of our cultures that which, in our humble belief, only enrich us and make us stronger.

I am pleased to share that Micronesia is presently COVID-free, but the threats of the coronavirus exploiting the vulnerabilities of our islands remain a major challenge for us.

While the COVID-19 pandemic presents to us new opportunities for innovation and resilience, for a young nation like Micronesia, our already difficult challenges in the area of law enforcement, fighting criminalities including money laundering, cybercrimes, and transnational crimes, would only intensify.

In this regard, joining the INTERPOL—with its network of 194 country members as policing partners—is, in our view, a step in the right direction towards expanding further our national capabilities and network of law enforcement cooperation. My delegation is very pleased with the decision of the INTERPOL General Assembly today to throw its full support to the membership of Micronesia.

In closing, my delegation also wishes to convey to you, Mr. President and Excellencies, Micronesia’s faith in the important work of the INTERPOL; and, given the historical significance of Micronesia’s membership, our delegation is present today in person despite the enormous difficulties associated with air travels over long distances from the Pacific Ocean to the magnificent city of Istanbul.

Thank you so much.

We have 1082 guests and no members online