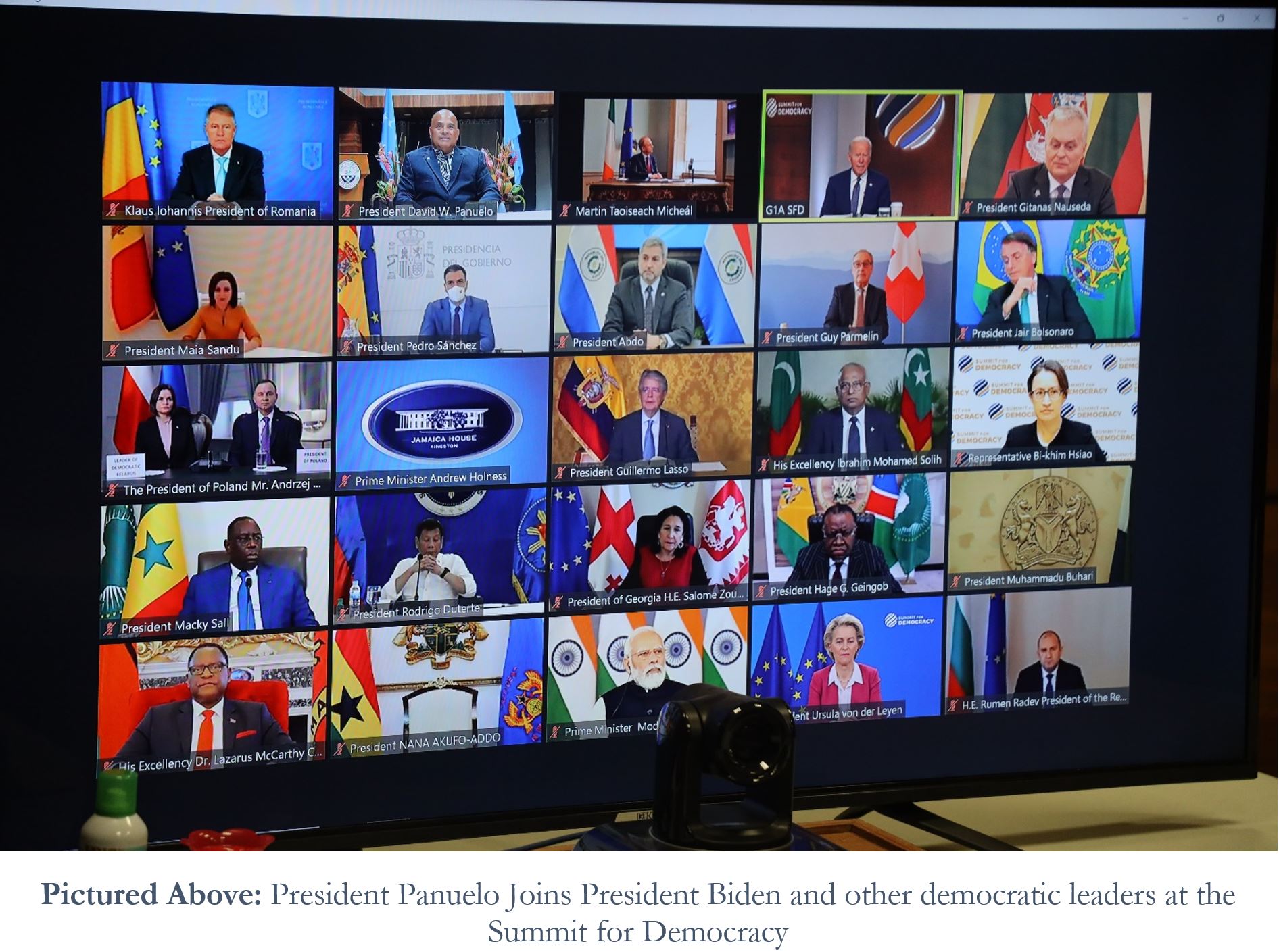 PALIKIR, Pohnpei—From December 9th to December 10th, 2021, His Excellency David W. Panuelo—President of the Federated States of Micronesia (FSM)—attended the Summit for Democracy, hosted by U.S. President Joseph R. Biden Jr., and attended by over one hundred (100) fellow democracies.

The purpose of the Summit for Democracy was to discuss how to strengthen democracies and democratic principles in the defense against authoritarianism, the fight against corruption, and the promotion of respect for human rights.

It is the perception of the FSM National Government that there was common agreement in the discussions that democracies—while imperfect by design, and imperfect in reality—are nonetheless the fairest way to deliver the greatest benefits to people around the world.

For the FSM’s formal and public-facing intervention statement, President Panuelo announced that he has just signed the FSM’s National Anti-Corruption Strategy; additionally, the President recognized the recent Transparency International report on corruption in the Pacific, and committed to taking positive action to positively change citizens perceptions.

President Panuelo noted that a significant threat to the FSM’s democracy is its lack of free media. “We have only one newspaper in our country, which has limited staff and no legal right to information from Government,” President Panuelo said. “This is unsustainable and must change.”

Additionally, President Panuelo advised President Biden and other democratic heads of government that he will be asking the FSM Department of Education, the College of Micronesia-FSM, and the Nation’s friends, allies, and development partners, to help increase media training, engagement, and development across the Nation.

The Federated States of Micronesia extends peace, friendship, cooperation, and love in our common humanity to all of you. Micronesia stands with the United States of America and all other democracies in the defense against authoritarianism, the fight against corruption, and the promotion of respect for human rights.

On this inaugural Summit for Democracy, I announce that Micronesia has just signed its National Anti-Corruption Strategy. I announce our recognition of the Transparency International Report on corruption in the Pacific, and commit to taking action to positively change citizens perceptions thereof.

A significant threat to Micronesia’s democracy is our lack of free media. We have only one newspaper in our country, which has limited staff and no legal right to information from Government. This is unsustainable and must change. My administration has submitted Micronesia’s first proposed Freedom of Information Act to our Congress for their consideration, and our Nation is committed to its passage. The strongest democracies ensure their citizens know what their Government is doing, how they are governing, and why they are governing the way they are.

Additionally, over this next year, I will be asking our Department of Education to collaborate with the College of Micronesia and our friends, allies, and development partners, such as the United States of America, Japan, Australia, the United Kingdom, and the European Union, to help increase media development, media engagement, and media training for our country.

From our perspective in Micronesia, it is essential that democracy not only survive, but prosper. In this regard, Micronesia solicits fellow democracies to review our democratic process, as it is imperative that elections be free, fair, and accessible. It is further in this regard that Micronesia encourages our first and foremost ally, the United States of America, to consider the passage of the John R. Lewis Voting Rights Advancement Act of 2021, as Micronesia’s own national security relies on American democracy thriving as a beacon for the World to follow. Our actions today in strengthening the international rules-based order is democracy’s prosperity tomorrow.

We have 486 guests and no members online