The FSS Independence & FSS Micronesia Depart After More Than Thirty Years of Service; Crews to Return with Guardian-Class Patrol Boats 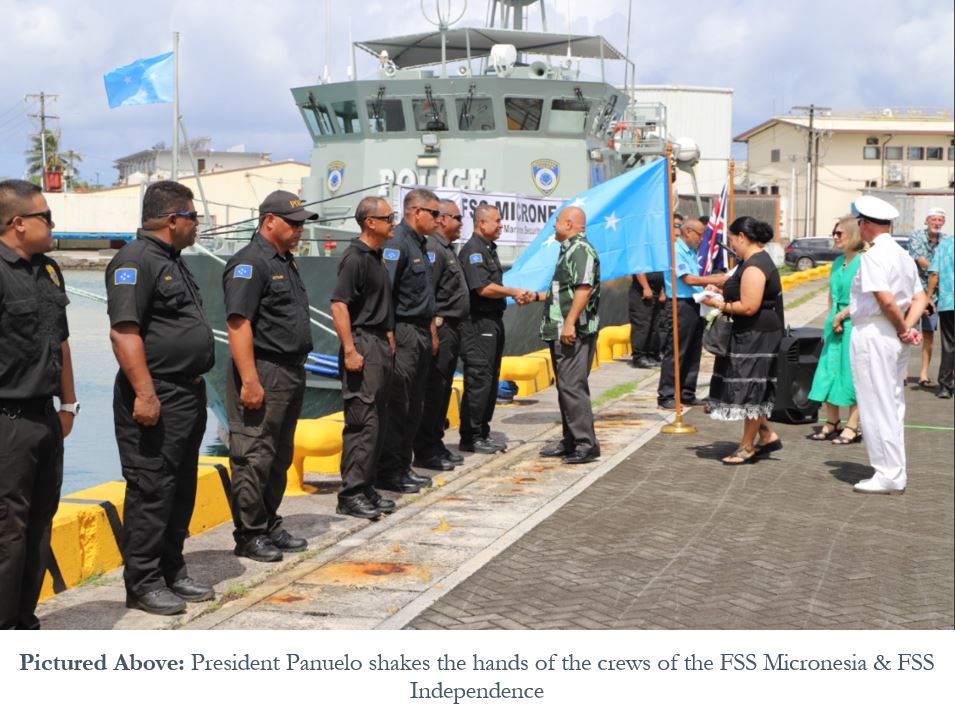 The FSS Independence & FSS Micronesia Depart After More Than Thirty Years of Service; Crews to Return with Guardian-Class Patrol Boats

PALIKIR, Pohnpei—On January 12th, 2022, His Excellency David W. Panuelo—President of the Federated States of Micronesia (FSM)—attended, in partnership with Her Excellency Jo Cowley, Ambassador of Australia to the FSM, the departure ceremony for the Federated States Ship (FSS) Independence and FSS Micronesia. The two patrol boats, which were provided to the FSM by Australia in March 1990, will be returning to Australia. Shortly after arrival, the crews of the Independence and Micronesia will receive extensive training on the new Guardian-class patrol boats, which are part of Australia’s Patrol Boat Replacement Program, itself a component unit of the Pacific Maritime Surveillance Program.

The FSM National Government expects to receive the first Guardian-class patrol boat on or around April, 2022, and the second Guardian-class patrol boat on or around July, 2022. In the interim period, the Government is requesting additional patrols from Australia, Japan, and the United States of America until such a time that the Nation’s maritime surveillance capacity is not only restored but strengthened.

During the departure ceremony, President Panuelo provided remarks which are provided below in full.

At the outset, I express my sincere gratitude to Her Excellency Jo Cowley, Ambassador of Australia, for her personal friendship to the FSM, and for Australia’s friendship to the FSM. I would like to recognize that our friends and allies in Australia have always supported our national ideals of peace, unity, and liberty. Of the multitude of ways Australia has consistently shown its support to our country, one of the standout initiatives has been the Pacific Patrol Boat Program.

The Pacific Patrol Boat Program has helped ensure that the men and women who serve the People of the FSM, through the National Police, are able to play an active role in securing our own borders and natural resources. The practical effect has been that Micronesia has been safer, and has been freer, which in turn has contributed to Indo-Pacific stability and security.

I remember joining former President John Haglegam in March of 1990 for the original handover ceremony. For the thirty (30) years of service these ships have provided to our Nation, the FSS Micronesia and FSS Independence have provided this Paradise in Our Backyards with the sovereign capability to conduct maritime surveillance and enforcement, as well as to assist our Nation with important missions ranging from Search & Rescue operations to disaster relief.

I wish to highlight that the departure of FSS Micronesia and FSS Independence leaves a critical gap in our national capacity to respond to SAR and emergency situations.  Just recently, we had one SAR operation in Pohnpei and one in Chuuk.   We can expect more SAR cases upon weather disturbances happening from time to time. In this regard, I would urge the State Governors to consider implementing measures that mitigate the situation, at least for the time being, as we are awaiting the arrival of new patrol boats from Australia.  I would encourage the States to require the registration of outboard motors in their respective state jurisdiction, and require them certain markings that will facilitate successful rescue during emergency situation.

Today, you—the crews of the Micronesia and the Independence—will begin your journey to the State of Western Australia. There, you will say goodbye to these faithful companions, and greet and become trained on the new Guardian-class replacements.

The technical briefings I have received on the new Guardian-class patrol boats could excite anyone. From the obvious to the unseen, and from the big to the small, I am informed that the new patrol boats are an improvement in every way. The new boats are 39.5 meters long, as opposed to 31.5 meters long; the new boats have a range of 3,000 nautical miles at 12 knots, as opposed to a range of 2,500 nautical miles; the new Guardian-class vessels are equipped with an onboard fast rescue boat, which will greatly improve search and rescue operations; the new boats have a series of quality-of-life improvements, such as a reduction in tank numbers to simplify the fuel system arrangement, simplified monitoring and control of mechanical systems, improved fuel consumption due to electronic control of main engines, and improved access to all voids and bilge spaces for inspection and maintenance, among so many other improvements.

You, the crews of the Micronesia and the Independence, have a long journey ahead of you. You will travel a long distance, to the shores of one of our Nation’s closest allies and friends, say goodbye to these vessels you have known throughout your careers, and bid warm greetings to their replacements.

Individually, and collectively, in my capacity as your President, I want you to know that I am proud of you. In a moment I will shake each of your hands, but first I will take this opportunity to say each of your names.

The Crew of the FSS Independence:

The Crew of the FSS Micronesia:

Thank you for serving your country in the way that you do: by saving lives, by stopping crimes, by providing disaster relief, and by personifying our national commitment of peace, friendship, cooperation, and love in our common humanity. I wish all of you the best in your voyage, and hope to have the opportunity to attend the handover on March 11th, 2022.

This concludes my formal remarks for today, but before you embark on your adventure to Australia, I would cherish the chance to shake your hands.

We have 474 guests and no members online