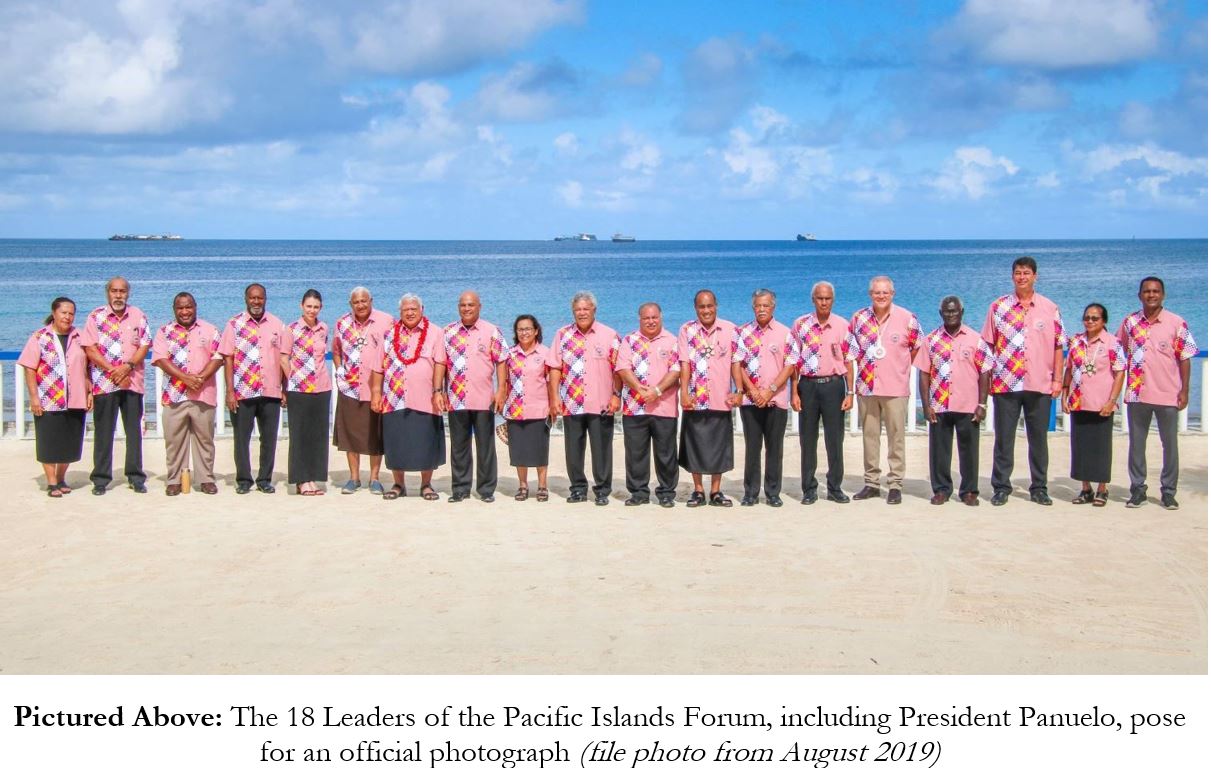 PALIKIR, Pohnpei—On March 30th, 2022, His Excellency David W. Panuelo—President of the Federated States of Micronesia (FSM)—wrote to the Honorable Manasseh Sogavare, Prime Minister of Solomon Islands, regarding the latter’s proposed security agreement with the People’s Republic of China. It is the view of the FSM National Government that such a novel and unprecedented security agreement between China and Solomon Islands poses a risk of increasing geopolitical tensions across the Blue Pacific Continent.

The text of the President’s letter to Prime Minister Sogavare can be found in full below, and the diplomatic note to Solomon Islands can be found here: https://gov.fm/files/Letter_to_T_H__Prime_Minister_Manasseh_Sogavare.pdf

Greetings from the Federated States of Micronesia! At the outset, I wish to emphasize my deepest respect to you, your office, and the People & Government of Solomon Islands, and on behalf of the People & Government of the Federated States of Micronesia, to express our collective well wishes for your People’s health and prosperity. Allow me to also emphasize at the outset that our Nation’s broader foreign policy outlook—that we are a friend to all, and an enemy to none—is consistent with that of Solomon Islands.

Mr. Prime Minister, I write to you today as a fellow Pacific Islander and friend, and to humbly offer our Government’s perspective regarding a topic I’m sure you’ve been hearing ceaselessly about; that is, your Government’s forthcoming security agreement with the People’s Republic of China.

The Federated States of Micronesia has grave security concerns about this proposed agreement because this agreement is entirely novel and unprecedented. Therefore, before you sign such an agreement, I would like to describe to you our own relationship with China, and what I fear the larger countries are privately preparing for.

The Federated States of Micronesia has had diplomatic relations with the People’s Republic of China since September 11th, 1989. We call our relationship the FSM-China Great Friendship. We have no loans with China, only grants; and the Chinese do not ask us to take loans. China always offers development assistance, but never insists on what development assistance might look like; when we ask for a ship, like the Hapilmohol-2, we get a ship, and when we ask for a Government Complex, like the Chuuk State Government’s campus, we get a Government Complex. Needless to say, economic and technical cooperation with China has been beneficial for our country and our People, and I am sure Solomon Islands is benefiting from a similar experience. The People & Government of China are a friend to the People & Government of the Federated States of Micronesia.

That said, you and I are both aware—and I think you’d agree that it can be plainly seen—that the U.S. and China are increasingly at odds with one another. This presents an issue—because the Federated States of Micronesia is a friend to the People & Government of China, but we are also a sincere friend, even an ally, of the People & Government of the United States of America.

Our ideal scenario in the Federated States of Micronesia is that China and the U.S., as well as Australia, Japan, New Zealand, and so many others, become friends with one another. Wouldn’t it be wonderful if they could look past their fears and grievances and embrace each other as friends? Wouldn’t it be terrific if they could see that the troubles of our times, such as Climate Change, require all of them working in concert instead of against each other?

That ideal scenario is my dream, and I share it through my addresses at the United Nations General Assembly and through media interviews, through Press Releases, and through casual conversation with the diplomatic corps based in our country. But a dreamer must also be practical, and in practice the countries we call friends are increasingly not acting very friendly with each other.

My fear is that we—the Pacific Islands—would be at the epicenter of a future confrontation between these major powers. It’s not an impossible fear; it has happened before. Both the Federated States of Micronesia and Solomon Islands were the battlegrounds during World War II. I am confident that neither of us wishes to see a conflict of that scope or scale ever again, and most particularly in our own backyards, and most especially as we can see—from Russia’s invasion of Ukraine—that the bigger countries will choose violence if they think it serves their interests, and without regard necessarily to our interests, such as our interest to not become collateral damage.

I imagine the following hypothetical scenario. The Federated States of Micronesia is currently negotiating its Compact of Free Association with the United States of America; meanwhile, China and Solomon Islands establish a close security partnership. The security partnership is a resounding success; Solomon Islands is wealthier from China’s business investments, such as in the extractive resources sector; and Solomon Islands is secured from internal and external threats. But China fears the U.S. fortress to its east, and Australia fears the Chinese fortress to its north. What happens next?

I ask you, Prime Minister: is it within the realm of plausibility that, as more Pacific Islands seek security arrangements with larger countries, that we could see a sovereign and peaceful Pacific become fragmented, and become tools for these larger countries’ spheres of power and influence? And is it plausible that, once the spheres have been carved out, that our concerns about Climate Change—today’s problem—would manifest into all-too-real concerns about a war in our backyards, with our people, our islands, as the playground for children playing as adults? Isn’t it plausible that our islands could become collateral damage once again, such as we saw occur in Guadalcanal in your country, and Chuuk in my country, during World War II?

I would maintain that this possibility is all too plausible; and that compels me, despite my country’s long friendship with China and our even longer enduring partnership with the United States, to appeal to you most respectfully to give your deepest consideration to the longer-range consequences for the entire Pacific Region, if not the entire world, that could well flow from a decision to host the establishment of a military presence by China in your country.

If any part of what I have written has given you pause, however briefly, then please feel empowered to reach out to me, and to the Pacific Islands Forum at large. As much as your bilateral security arrangement may be strictly a matter between your country and the People’s Republic of China, its existence would absolutely affect all countries who call the Blue Pacific their home. The Federated States of Micronesia cannot endorse or agree if your decision is to proceed with a security relationship with the People’s Republic of China, because of its far-reaching and grave security implications for our harmonious and peaceful Blue Pacific Continent.

Thank you, Prime Minister, for your kind attention to my lengthy letter. I say again for posterity that the People & Government of the Federated States of Micronesia extend to you peace, friendship, cooperation, and love in our common humanity, and pledge that it is our goal that our two countries shall always share this friendship with each other as fellow brothers and sisters of the Pacific.

We have 1787 guests and one member online