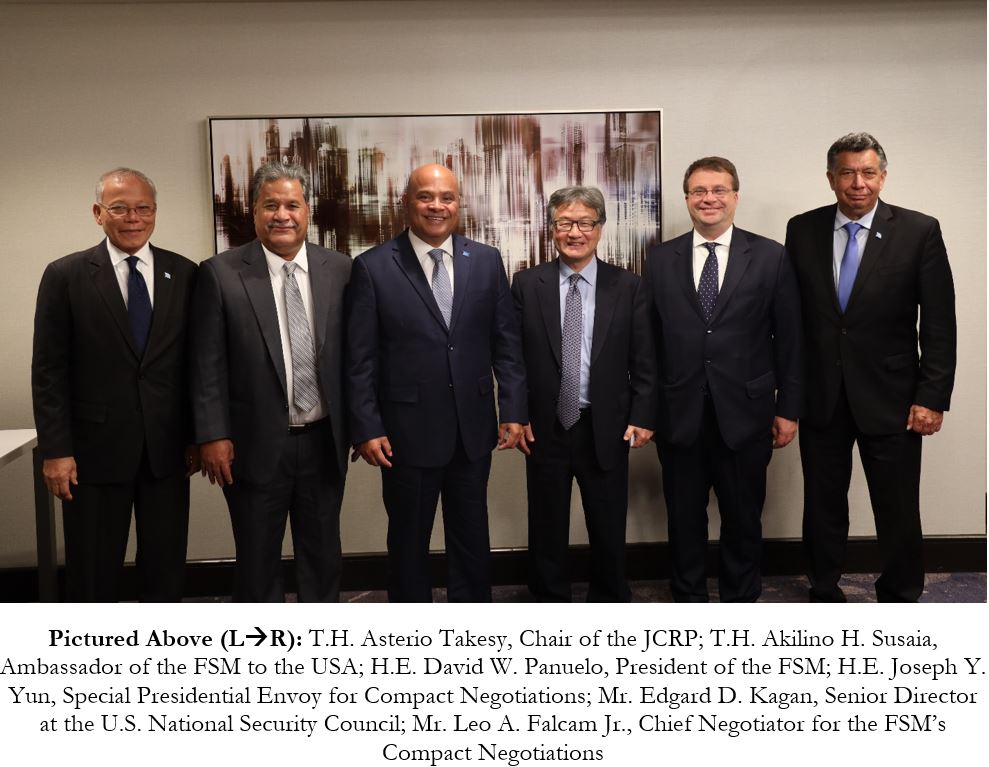 “Our citizens have significant, profound, and very real concerns about the U.S. providing a substantial assistance package over the next 20 years,” President Panuelo said in a statement. “It is my sincerely held belief as President of the FSM that the package we are submitting addresses the short, medium, and long-term needs of our Nation. While flying to D.C., I saw a teacher I knew in Pohnpei State who has left both his job and his country because his salary no longer provides for his family’s needs. While in D.C., I became aware of additional information regarding the Yap State hospital workers strike and its impact on public health, livelihoods, and morale. Meanwhile, the infrastructure and other needs of our country can be better met with a streamlined provision of assistance. The Education, Health, and Infrastructure Sectors are of paramount importance to our Nation’s development, and the package in its presented form will be of great help.”

“Additionally,” President Panuelo described, “The proposed package includes an additional yet also critically essential pillar on the Environmental Sector, as we are collectively and keenly aware that Climate Change represents the FSM’s most significant and existential security risk. The proposed Environment Sector would play a key role in our Nation’s adaptation and mitigation efforts which, given our World’s lack of progress on tackling Climate Change, is ultimately going to make the difference on whether or not islands like Kapingamarangi Atoll and the Mortlocks literally exist fifty years from today.”

“The acceptance of this Compact package would be a great and significant investment for both of our countries,” the President continued.

“I believe Ambassador Yun when he says he wants the FSM to be genuinely happy with the outcomes of our negotiations, and I am touched and heartened when he describes that this is a negotiation between family,” President Panuelo said. “It’s a very true statement. The People and Government of the FSM are family with the People and Government of the United States, with whom we share an Enduring Partnership.”

We have 1352 guests and one member online