President Panuelo Officially Opens the Consulate General of the Federated States of Micronesia in Portland, Oregon 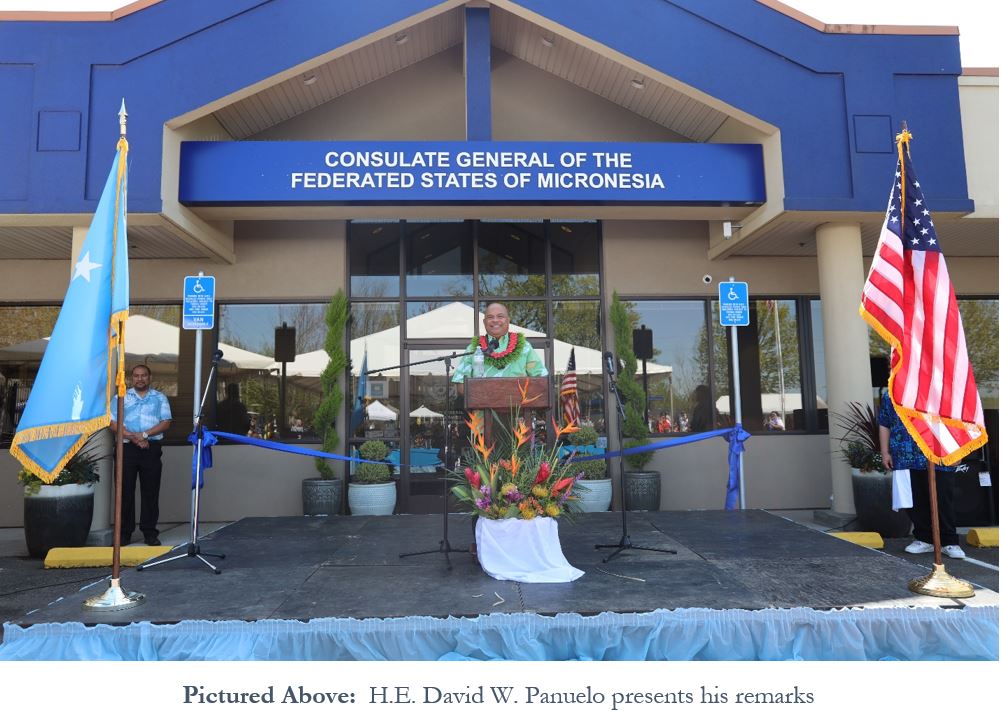 President Panuelo Officially Opens the Consulate General of the Federated States of Micronesia in Portland, Oregon

PORTLAND, Oregon—On April 23rd, 2022, the Consulate General of the Federated States of Micronesia (FSM) officially opened through a ribbon-cutting ceremony in the City of Portland, U.S. State of Oregon. The ribbon was cut by His Excellency David W. Panuelo, President of the FSM, and First Lady Patricia E. Edwin; His Excellency Akilino H. Susaia, Ambassador of the FSM to the USA, and Mrs. Susaia; and the Honorable Joe Enlet, Consul General of the FSM in Portland, and Mrs. Enlet.

In his remarks, President Panuelo recalled his personal journey in the State of Oregon and the Pacific Northwest, both when he was a student at Eastern Oregon University and later in life as a private citizen. Noting that Oregon is home to the largest FSM diaspora in the U.S. mainland, the President extended his very sincere appreciation to the many citizens and organizations who have played such a critical role in the establishment of the Consulate General of the FSM, including the COFA Alliance National Network, the FSM Coalition-USA, and the City of Portland and State of Oregon. Additionally, President Panuelo extended his and the Nation’s gratitude to the Oregon Health Authority for their close partnership with the FSM community in Oregon during the COVID-19 Pandemic, and last, but not the least, to the Honorable Wesley W. Simina, Speaker of the 22nd FSM Congress, and other Members of the Congress, through the Honorable Victor V. Gouland, Senator in the 22nd FSM Congress, who was physically present for the ceremony, for the FSM Congress’ support in funding the Consulate and its operations.

Seizing the opportunity to address the FSM community in Portland directly, President Panuelo provided informational updates regarding the Panuelo-George administration’s recent activities over the past several months. President Panuelo noted that the Nation’s Chief Negotiator met with his U.S. counterpart to submit the Nation’s proposed Compact economic assistance package; that the FSM severed relations with the Russian Federation as a sovereign decision to protest their brutal and unjustified invasion of Ukraine; and that the FSM stands with other democracies in seeking to promote a Free & Open Indo-Pacific, as well as maintaining and strengthening the rules-based international order.

“The actions we take today are our Nation’s prosperity tomorrow,” President Panuelo said, “And today’s action of opening this Consulate Office here in Portland will help the prosperity and growth of our citizens who call the City of Portland their second home.”

In addition to a wide and diverse range of activities including songs and dances, other speakers of the day included a representative of the Native American community, Renea Perry, and the Mayor of the City of Portland, the Honorable Ted Wheeler. With regards to the former, Ms. Perry described the Native American community’s sincere and familial welcome to the People of Micronesia who call Portland and Oregon their home. With regards to the latter, Mayor Wheeler described that the City of Portland sees, recognizes, and appreciates the Micronesian community in the Pacific Northwest, and that Micronesians have enriched the lives and livelihoods of their neighbors. It was also noted that the FSM Consulate General in Portland represents the Nation’s largest diplomatic structure (which, for comparison’s sake, is even larger than the Department of Foreign Affairs’ home office in Palikir.)

The FSM Consulate General in Portland overlooks the affairs of the FSM’s citizenry in Oregon, the Pacific Northwest, and all other U.S. States on the U.S. mainland west of the Mississippi River. The Consulate provides assistance on topics ranging from passport applications to navigating both FSM and U.S. Government bureaucracy (e.g. I-94 documentation, drivers licenses, social security numbers, employment support, and other essential documentation and useful information).

The FSM Consulate General in Portland can be reached by email at This email address is being protected from spambots. You need JavaScript enabled to view it.,  by telephone at +1 (503) 483-7149, or engaged in person at 2625 SE 98th Avenue, Portland Oregon 97266.

We have 1597 guests and one member online