The Federated States of Micronesia Joins the United States of America, Canada, Australia, Japan, the European Union, & Other Like-minded Countries, in Signing a Declaration for the Future of the Internet 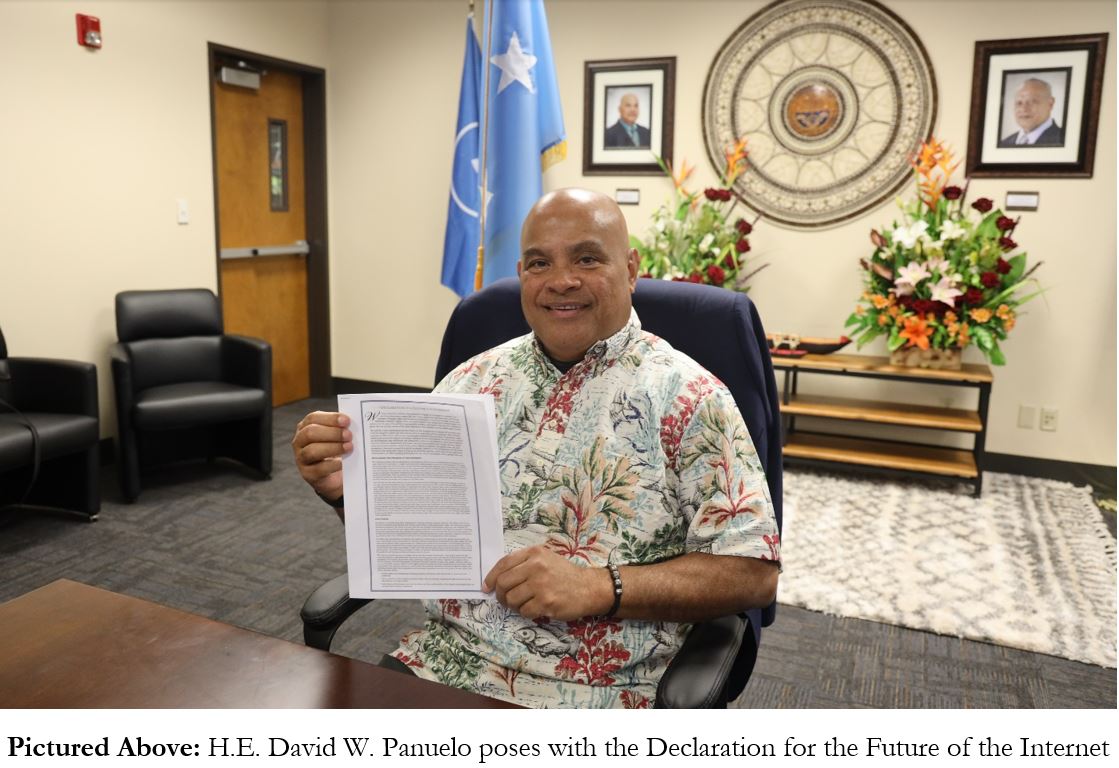 The Federated States of Micronesia Joins the United States of America, Canada, Australia, Japan, the European Union, & Other Like-minded Countries, in Signing a Declaration for the Future of the Internet

PALIKIR, Pohnpei—On April 28th, 2022, His Excellency David W. Panuelo—President of the Federated States of Micronesia (FSM)—signed the Declaration for the Future of the Internet. In this regard, the FSM joins more than fifty-five (55) other like-minded nations, including the United States of America, Canada, Australia, Japan, New Zealand, the Members of the European Union, the United Kingdom, and Ukraine—to affirm a collective “commitment to promote and sustain an internet that is open, free, global, interoperable, reliable, and secure, and to ensure that the internet reinforces democratic principles and human rights and fundamental freedoms; offers opportunities for collaborative research and commerce; is developed, governed, and deployed in an inclusive way so that unserved and underserved communities, particularly those coming online the first time, can navigate it safely and with personal data privacy and protections in place; and is governed by multistakeholder processes.”

In short, the FSM joins like-minded countries in ensuring “an internet that can deliver on the promise of connecting humankind and helping societies and democracies to thrive.”

The non-binding Declaration describes that its signatories will protect human rights and fundamental freedoms, including the principles of the rule of law, legitimate purpose, non-arbitrariness, effective oversight, and transparency, both online and offline, as well as calling upon others to do the same.

The Declaration describes that its signatories will refrain from Government-imposed internet shutdowns or degrading domestic internet access, either entirely or partially, and refrain from blocking or degrading access to lawful content, services, and applications on the internet, consistent with the principles of Net Neutrality as subject to applicable law, including international human rights law.

The Declaration describes that its signatories promote an inclusive and affordable access to the internet, including supporting digital literacy, skills acquisition, and development so that individuals can overcome the digital divide, participate in the internet safely, and realize the economic and social potential of the digital economy.

Additionally, and relevant to the FSM, the Declaration describes that its signatories will work together to combat cybercrime, include cyber-enabled crime, and deter malicious cyber activity. Signatories will protect individuals’ privacy and personal data, the confidentiality of electronic communications and information on end-users’ electronic devices, as well as promote the protection of consumers from online scams and other unfair practices. Signatories will promote and use trustworthy network infrastructure and service suppliers, relying on risk-based assessments that include technical and non-technical factors for network security, and refrain from using the internet to undermine electoral infrastructure, elections, and political processes, including through covert information manipulation campaigns.

“The FSM is committed to human rights and the rules-based international order,” President Panuelo said in a statement. “Access to the internet is a human right, and all citizens, residents, and visitors in the FSM have the right to access lawful content. The FSM National Government supports the principles and details of the Declaration for the Future of the Internet, including the protection of human rights and fundamental freedoms, promoting a global internet, ensuring inclusive and affordable access to the internet, bestowing trust in the digital ecosystem, and ensuring multistakeholder internet governance. The FSM is committed towards using the internet for the democratization of knowledge, and not the dissemination of disinformation and misinformation from scam-seekers and malign state actors. The FSM believes that the principles for the future of the internet are universal in nature, and our Nation invites those who share this vision to affirm these principles and join us in its implementation.”

The Declaration for the Future of the Internet can be found here: https://gov.fm/files/Declaration_for_the_Future_for_the_Internet_FINAL_20220425.pdf

We have 1279 guests and one member online