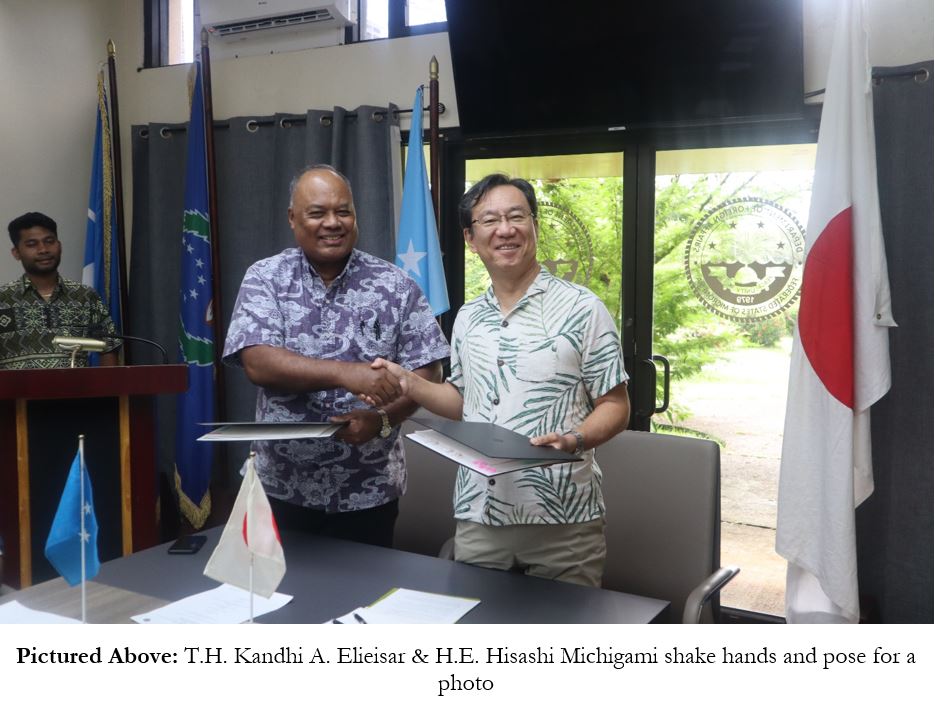 PALIKIR, Pohnpei—On June 3rd, 2022, the Honorable Kandhi A. Elieisar—Secretary of the Department of Foreign Affairs of the Federated States of Micronesia (FSM)—received His Excellency Hisashi Michigami, Ambassador of Japan, for a signing ceremony pertaining to two non-project grants from the People and Government of Japan to the People and Government of the FSM. The two grants are for the acquisition of four mini-patrol boats, and $2,700,000 worth of diesel fuel.

“On behalf of the People and Government of the FSM,” His Excellency David W. Panuelo, President of the FSM, said in a statement, “I extend our deepest gratitude to the People and Government of Japan, with whom we share a Kizuna (special bond), for moving forward with our request for four mini-patrol boats. The threats posed to our Nation by illegal fishing, near-shore poaching and harvesting of marine resources, and human trafficking, are entirely real. Additionally, these boats can assist the FSM with search and rescue efforts and disaster relief. Altogether, the patrol boats will assist in our Nation’s overall commitments to a Free & Open Indo-Pacific and the broader Indo-Pacific Strategy to keep our Blue Pacific Continent secure.”

In addition to the signing ceremony for the four mini-patrol boats, the Secretary and the Ambassador also signed for the procurement of approximately $2,700,000-worth of diesel fuel. This marks the second time that the FSM has received assistance of this kind, with the first donation of fuel occurring on September 17th, 2020.

We have 2220 guests and no members online