“A Black Cloud Has Disappeared From The Pacific”; Micronesia Almost Certainly to Remain in Pacific Islands Forum; Pacific Unity Strengthened & Solidified, with Subregional Rotation of Secretary-General to Begin in 2024 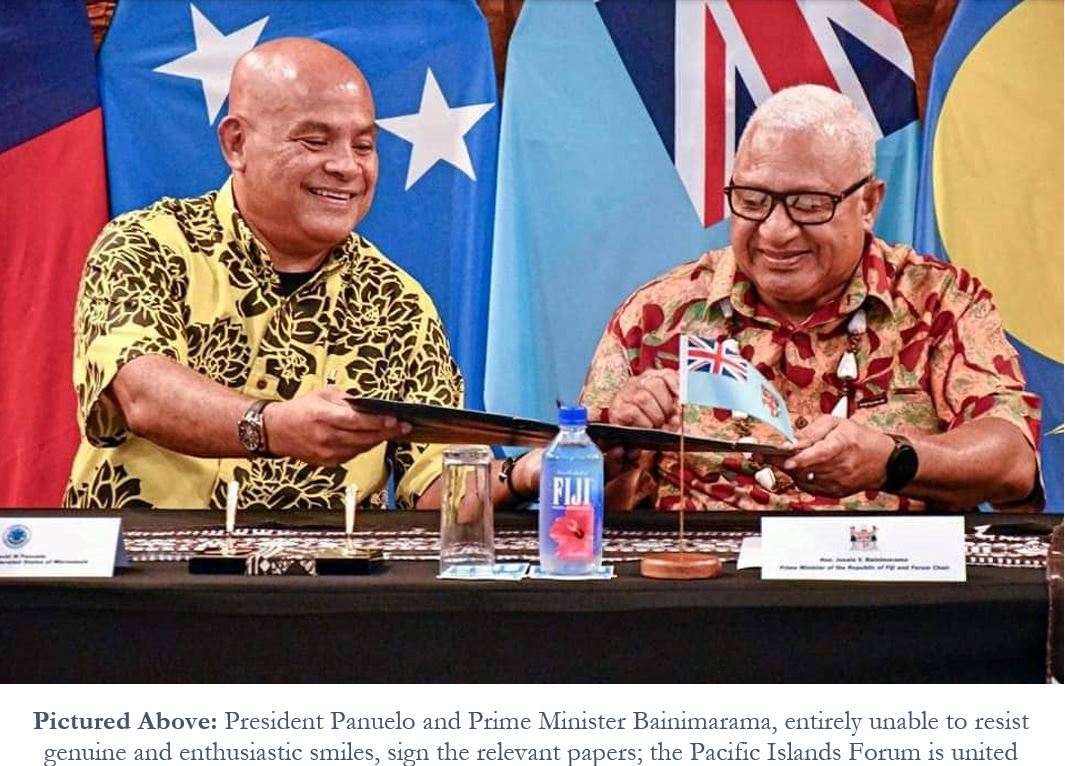 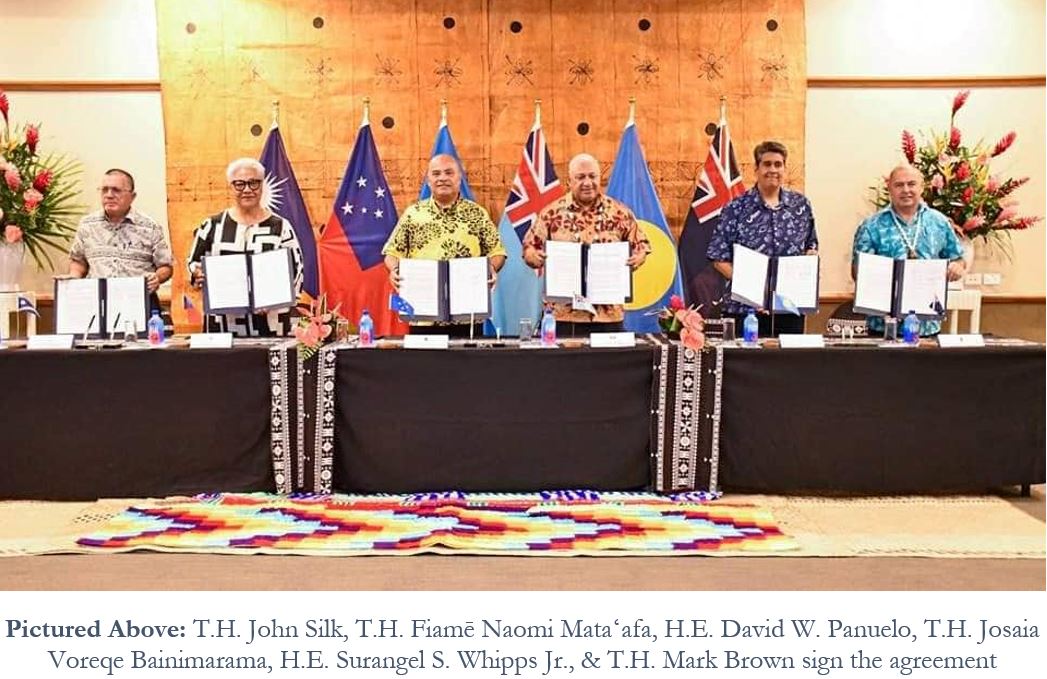 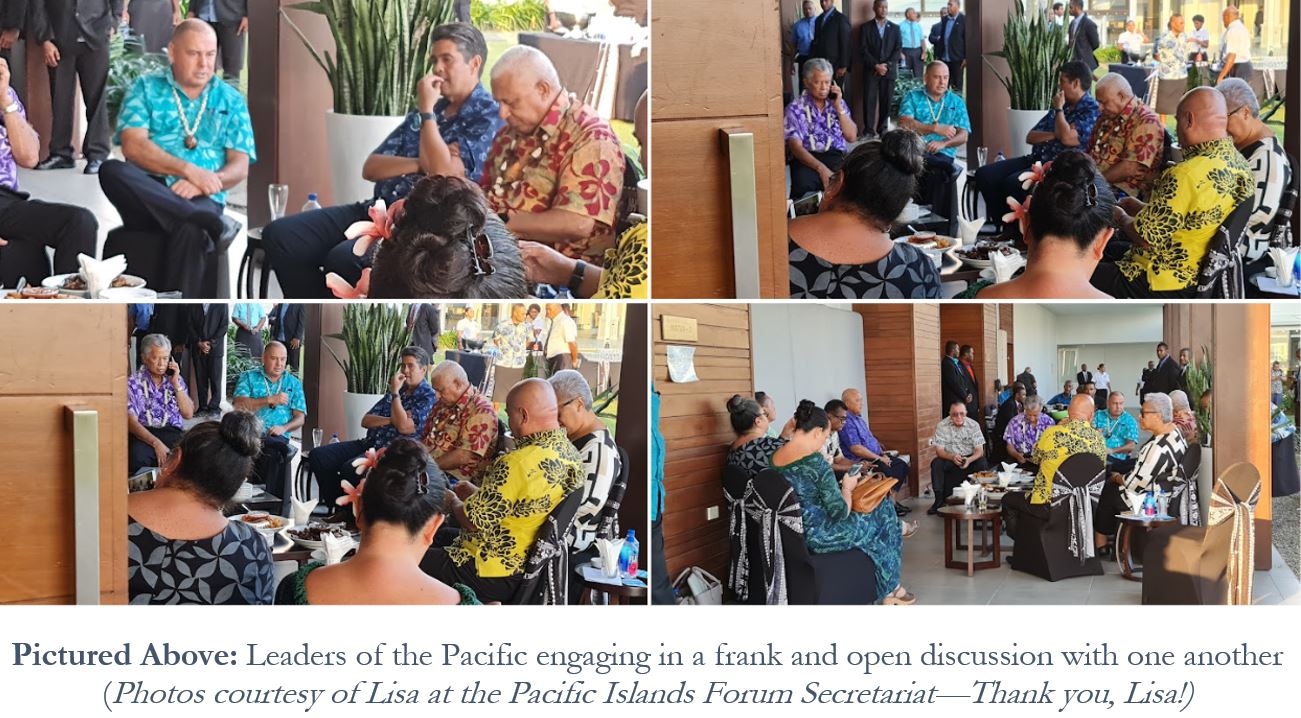 “A Black Cloud Has Disappeared From The Pacific”; Micronesia Almost Certainly to Remain in Pacific Islands Forum; Pacific Unity Strengthened & Solidified, with Subregional Rotation of Secretary-General to Begin in 2024

The High-Level Dialogue was established in order to address and resolve major reform issues concerning the impasse that resulted in the imminent withdrawal by the Micronesian Presidents’ Summit, to explore and discuss needed genuine political reforms within the Forum, and as a demonstration of respect for the shared bonds as Pacific Islanders. Additionally, the High-Level Dialogue was established due to the collective desire for a constructive dialogue on substantive leadership and political reforms to avoid the disintegration of the Forum membership, and a collective recognition that a united Pacific represents the region’s best chances at maintaining peace (and preventing war), developing prosperity (and preventing hardship), and mitigating and adapting to Climate Change (and preventing civilizational collapse).

As a demonstration of leadership and brotherhood, the Chair of the Pacific Islands Forum offered a reform package for consideration by the Micronesian Presidents Summit. The proposed package in its original form showed recognition and appreciation for the perspective of the Micronesian Presidents Summit as originally stated in the Mekreos Communique.  Following candid and genuinely friendly discussions on the basis of good faith, mutual trust and respect, and Pacific solidarity, the proposed reform package has been approved by the countries involved in the discussions. At the time of this Press Release’s dissemination, the Presidents of the FSM, Palau, the Marshall Islands, and the Republic of Nauru are attempting to get in contact with the Republic of Kiribati to garner their support for the proposed reforms.

The reform package includes that all members of the Pacific Islands Forum agree that equal representation of the three sub-regional bodies of Micronesia, Polynesia, and Melanesia, is essential; as such, there shall be two Deputy Secretary-General positions, each hailing from a separate sub-region as the Secretary-General.

The reform package further includes that all members of the Pacific Islands Forum agree to rotate both the Secretary-General and the Forum Chair by sub-region, with Micronesia to hold the next Secretary-General position beginning in 2024 for a term of five years.

There is further agreement that a Pacific Islands Forum sub-regional office shall be created in the Micronesia sub-region.

“My fellow Micronesians,” President Panuelo said in a statement addressed to the citizens of the FSM specifically, “A black cloud has disappeared from the Pacific with sunshine after a fresh rain in its stead. We—the Micronesian Presidents Summit and the Pacific Islands Forum—have collectively found a way to make keep our Pacific family unified, to make it stronger against external and internal pressures, and with Micronesia’s appeals respectfully heard and addressed by our brothers and sisters in Polynesia and Melanesia. To be clear: we have won. All of us have won; Micronesians, Polynesians, Melanesians all; because we, the Pacific, have achieved a means of making our Pacific Islands Forum truly represent us all.”

“Finally, I give my thanks to the People and Government of Australia, both for their assistance in providing transportation and logistical support, as well their absolute dedication to ensuring that the matters of the Pacific are solved by the Pacific; this is a profound demonstration of trust and respect. When I spoke with Foreign Minister Penny Wong last week, I was reminded of the kindness, sincerity, and love that I knew Australia and its people are all about. She is a capable diplomat, and I am dearly looking forward to strengthening our FSM-Australia relations together. In this respect, I also give public thanks to Her Excellency Jo Cowley, Ambassador of Australia, who has been a true friend to our Nation, our people, and to me personally.”

The FSM will rescind its denunciation of the Pacific Islands Forum and looks forward to the reform package being adopted in full in July, 2022.

We have 2109 guests and no members online