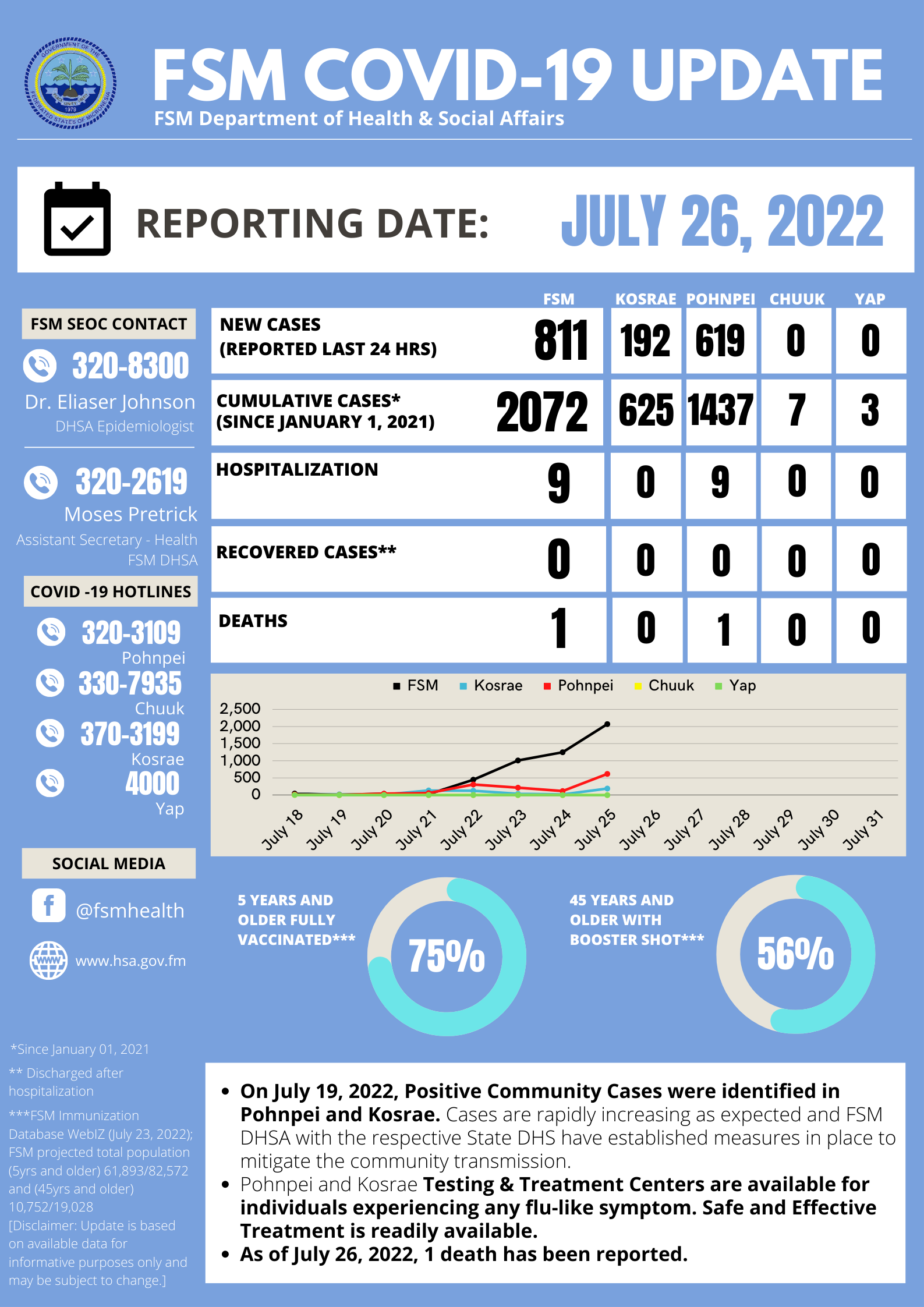 Notes from mass distribution below:

ALCON,
Attached is the COVID-19 update report for July 26th, 2022. Please disseminate where appropriate and in local language when possible.

We're still in the process of fine-tuning these reports for readability and accessibility. With the interest of simply getting you the information quickly, and in a digestible fashion, I'm including some notes below on how to interpret the attached report.

First--the cases from Chuuk and Yap are reflective of previous repatriation flights. All of those cases were border cases, found and isolated in quarantine. Both Yap and Chuuk remain COVID-19 free in their communities.
Second--the term "hospitalization" in the attached report means "a person is positive for COVID-19 and is presently under medical care at a state or private hospital." This is the census number for all individuals in the hospital.
Third--the term "recovered" in the attached report means "a person who WAS under medical care at a state or private hospital is no longer positive for COVID-19 and has left the hospital's care." This is a cumulative number.
We intend to fine-tune the daily COVID-19 sitreps to the point where the above notes aren't necessary--but, for now, our belief is that the above clarifications may be valuable to you.
Below are additional updates for today, July 26th, 2022.
Officials at the Office of the President describe that Vice President Yosiwo P. George continues to improve, but remains in hospital.
Pohnpei State Hospital has announced it has ceased all outpatient activities and canceled all doctor appointments. I can confirm that multiple medical staff, at the national and state level, ranging from nurses to epidemiologists, are presently positive with COVID-19 and unable to work.
Concerns on losing the hospital and other infrastructure has prompted additional, and focused, discussion at the FSM Government on how to maintain critical infrastructure, e.g. logistics pipelines, medical-care facilities, power and water utilities, and communications. President David W. Panuelo instructed relevant departments to offer assistance to the FSM's states of Yap, Chuuk, Pohnpei, and Kosrae for this purpose.
The flight that was scheduled to bring the two U.S. CDC medical teams to Pohnpei State and Kosrae State today was canceled; the arrival of the teams has been rescheduled for later in the week.
Additional businesses have temporarily closed down of their own volition, citing concerns regarding the community spread of COVID-19. Banking institutions and other private businesses that perform essential societal functions have either closed, altered their hours of business to occur from 9am to 12pm, and/or limited the services that they provide. The majority of non-government organizations and diplomatic missions representing foreign governments are presently mandating their staff to either work from home and/or to only receive persons at their offices if an appointment is made in advance.
In at least two FSM Government departments, the bulk of senior officials (e.g. persons with the title of Assistant Secretary, who are often the head of a Division) are positive for COVID-19. Several FSM Government departments have implemented plans to allow work-from-home, and others have allowed persons who are asymptomatic or with mild symptoms to return to work so long as they wear masks.  Lack of uniformity in this regard was discussed in a meeting between the Cabinet.
In a meeting between President David W. Panuelo and his Cabinet, the Department of Health & Social Affairs reported that the FSM possesses enough Paxlovid medicine for 21,000 persons. I am not able to confirm, or describe, how judiciously these medicines are, or are not, being used.
The meeting between President David W. Panuelo and the FSM Governors occurred, but the only states that were represented were the State of Kosrae and the State of Chuuk. The Governor of Yap, Jesse J. Salalu, was unable to attend due to being positive for COVID-19;  he is in Pohnpei State and is isolating. The FSM Government received no reply from Pohnpei State Government. Chuuk State Government has requested to delay the opening of its borders beyond August 1st, 2022. The FSM Department of Justice's legal team met with their counterparts at Chuuk State Government today to discuss this issue. President David W. Panuelo spoke with Governor Alexander R. Narruhn on this issue. The purpose of Chuuk State's request is to accommodate the completion of Chuuk State Hospital's renovations, which are projected to be completed in November, 2022. A primary concern raised in a meeting between President David W. Panuelo and his Cabinet is whether or not the FSM Government's Executive Branch is able to do this--both in the legal sense (i.e. "is this lawful?"), and in the practical sense (i.e. "how would we execute the request effectively?")
The regulations for Public Law 22-134, i.e. the Healthy Border Protection Act, are due to be signed on or around July 30th, 2022, which will be followed by a formal Press Release describing the regulations. I am permitted to relay that it is the intent of President David W. Panuelo to address the Nation and its People sometime prior to the signing.
I can confirm having received, today, 37 unique messages and reports, from persons including FSM Government officials, Pohnpei State Government officials, friends, family, neighbors, and acquaintances in the private sector and civil society, describing that they witnessed overcrowding at Test & Treat sites either yesterday and/or today and, on that basis, described leaving the venue of their own accord without being tested. I am able to verify the authenticity of 11 of these reports, of which 9 were from FSM Government officials and/or contractors.
This concludes the updates for tonight. There will be additional updates tomorrow evening.

Office of the President

Government of the FSM

We have 1278 guests and no members online