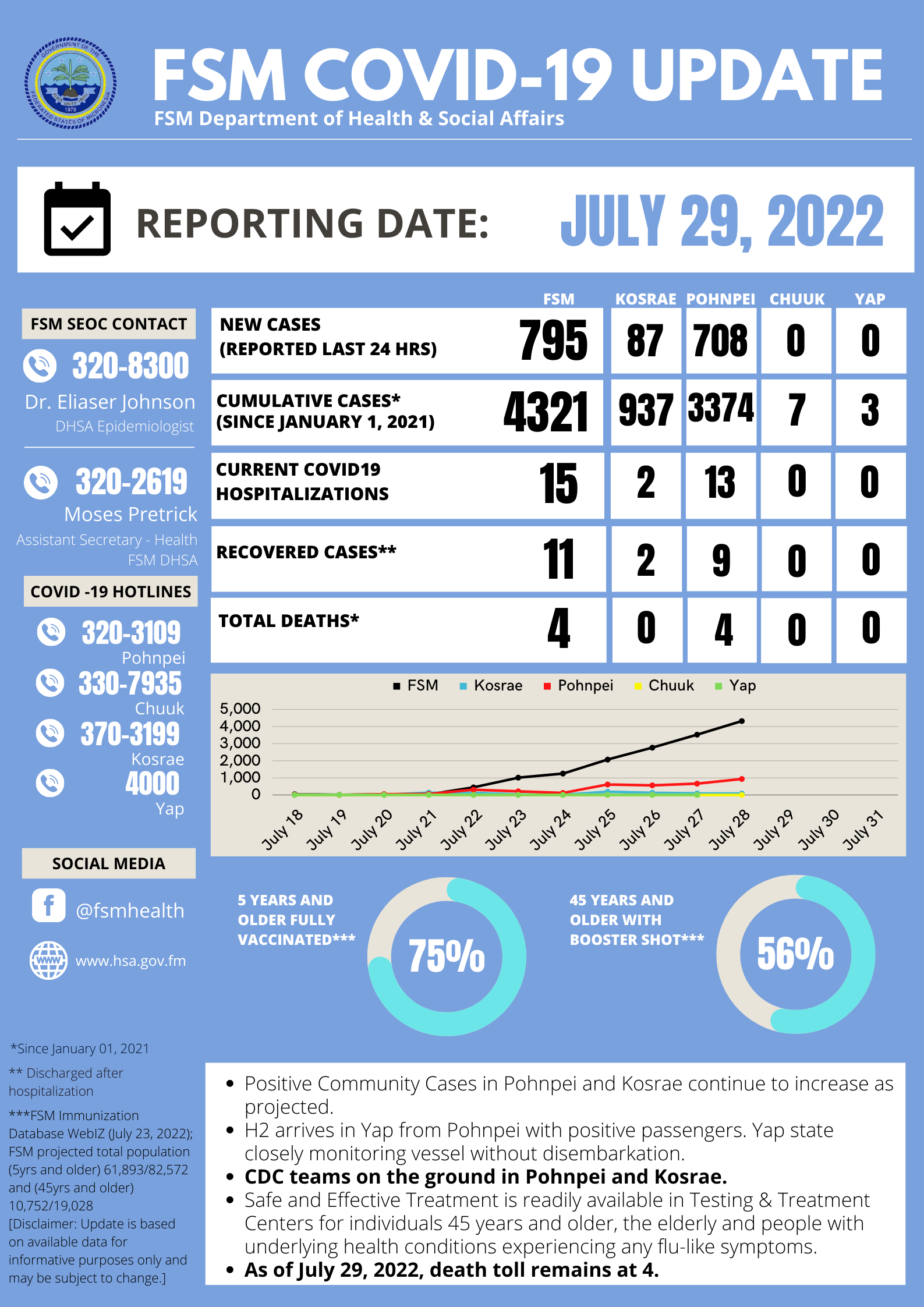 Attached is the COVID-19 update report for July 29th, 2022. Please disseminate where appropriate and in local language when possible.

We're still in the process of fine-tuning these reports for readability and accessibility. With the interest of simply getting you the information quickly, and in a digestible fashion, I'm including some notes below on how to interpret the attached report.

First--the cases from Chuuk and Yap are reflective of previous repatriation flights. All of those cases were border cases, found and isolated in quarantine. Both Yap and Chuuk remain COVID-19 free in their communities.

Second--the term "hospitalization" in the attached report means "a person is positive for COVID-19 and is presently under medical care at a state or private hospital." This is the census number for all individuals in the hospital.

Third--the term "recovered" in the attached report means "a person who WAS under medical care at a state or private hospital is no longer positive for COVID-19 and has left the hospital's care." This is a cumulative number.

We intend to fine-tune the daily COVID-19 sitreps to the point where the above notes aren't necessary--but, for now, our belief is that the above clarifications may be valuable to you.

Vice President Yosiwo P. George has left the hospital and has recovered from COVID-19.
The FSM is currently facing community spread of Omicron BA.5, which was relayed to me by officials at the FSM Department of Health & Social Affairs an hour prior to this email's dissemination. Specimens were sent off for sequencing earlier this week.
I remain unable to obtain the vaccination status and health profiles of hospitalized patients and deceased persons. I am advised by multiple officials at the FSM Department of Health & Social Affairs that they are having a similar issue. I am advised by multiple officials at Pohnpei State Government that they are having a similar issue.
The MV Hapilmohol-2, which left Pohnpei State in order to bring home the Yap Delegation to the Micronesian Expo, has arrived in Yap State. There are confirmed positive cases of COVID-19 onboard the vessel; I am not able to confirm a specific number as of this email, but two officials from the FSM Department of Health & Social Affairs have suggested it is a two-digit number. The vessel is reportedly low on food and water. Persons will not disembark from the vessel at this time.
Senior officials from Kosrae State Government describe that Kosrae is successful at maintaining essential services and utilities, though one banking institution remains temporarily closed due to a shortage of staff. It was described by these senior officials that all offices and work remain ongoing, and that persons who test positive are allowed to rest if necessary, and/or to work from home if possible.
Several FSM Government officials and five Chuuk State Government officials reported that Chuuk State held a whole-of-government meeting today, with attendees ranging from elected officials to senior staff across Chuuk State's Executive and Legislative branches. The purpose of the meeting, it was described, is for Chuuk State to coordinate and prepare for the opening of borders on August 1st, 2022. Without exception, all officials reporting this information from the FSM Government and Chuuk State Government relayed the latter's disappointment that the borders will open on August 1st, 2022. The most diplomatic of these officials described the forthcoming community spread in Chuuk State as sobering, disappointing, and deeply worrying; it was described by one official that there is a palpable sense of dread that the healthcare system will face significant challenges.
The FSM Post Office in Pohnpei was closed yesterday, and has begun a new schedule until such a time that the staff are able to return to work. It was described by the Acting Postmaster General that, of eleven employees, only three were available for work. President David W. Panuelo has approved the temporary schedule, wherein the receipt of outbound mail for Kolonia and Palikir Stations shall occur on Tuesdays and Fridays between 8:00am-12:00pm and the delivery of packages shall occur on Mondays, Wednesdays, and Thursdays between 8:00am-12:00pm.
President David W. Panuelo met with the Governor of Guam, Lou Leon Guerrero, at 7:30am this morning. President Panuelo solicited Governor Leon Guerrero's advice on managing community spread of COVID-19, and virtually all of the approximately eighty-minute conversation focused on this topic. Among the many recommendations and advice shared, Governor Leon Guerrero described that the Government of Guam found it useful to receive support from the U.S. Government, including support from the U.S. Armed Forces. Hours after the meeting's conclusion, President Panuelo wrote and signed a letter addressed to Rear Admiral Benjamin Nicholson of Joint Region Marianas. "I write...to request your favorable consideration of medical and health assistance to be extended to the FSM," President Panuelo wrote, "Your generous provision of medical logistical support will surely go a long way in containing the spread of COVID-19 in the community."
The staff of the Governor of the Commonwealth of the Northern Mariana Islands, Ralph DLG Torres, have reached out to the Office of the President, describing that Governor Torres is aware of community spread of COVID-19 in the FSM and wishes to meet with President David W. Panuelo so as to offer assistance. It is the intention of President Panuelo to graciously and enthusiastically accept this meeting at the nearest possible convenience.
The Secretary of the FSM Department of Health & Social Affairs, Marcus Samo, confirms that the FSM needs more COVID-19 test kits. Additionally, the Secretary describes that the FSM is seeking to acquire more Tylenol and Diphenhydramine HCL.
I have received thirteen reports about alleged extortionate pricing with regards to personal protection equipment, such as masks. Surgical masks are reportedly being sold between $2.00-$3.00 per piece in Pohnpei State. I can confirm at least four stores are selling masks at these prices. International media will appreciate additional context to this practice, so I relay here that Pohnpei State's minimum wage is $1.75 per hour.
This concludes the updates for tonight. There will be additional updates tomorrow evening.

Office of the President

Government of the FSM

We have 1059 guests and no members online