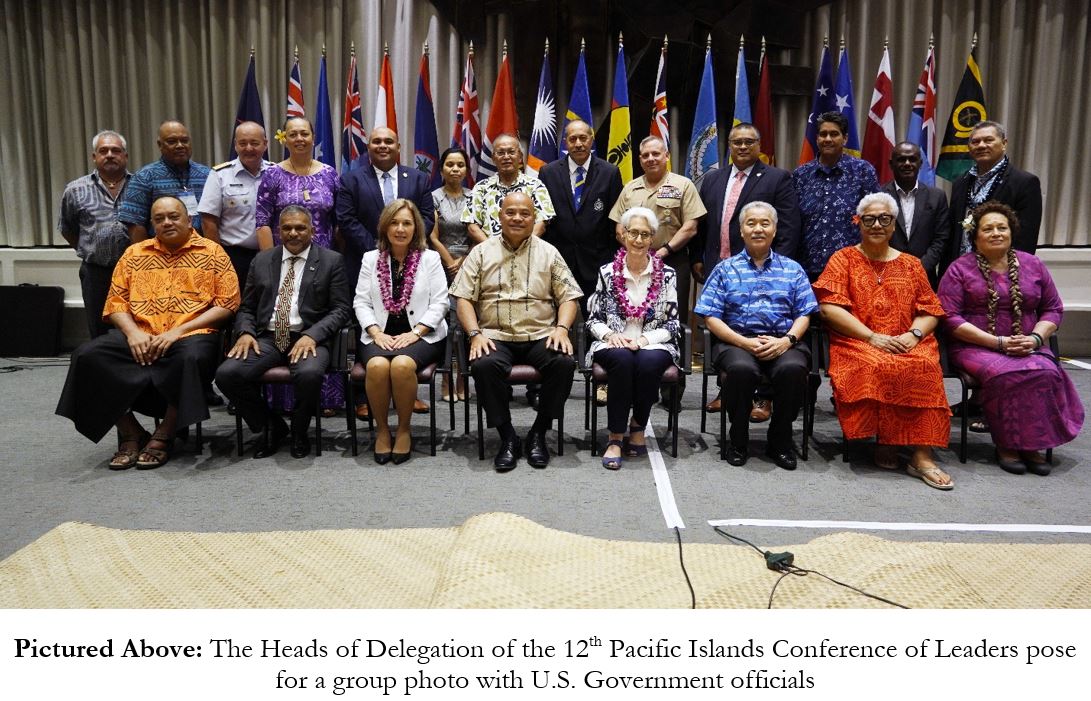 Operating on the theme “Pu’uhonua: The Pacific Way Forward”, the PICL is a safe space for active engagement and dialogue between Pacific Islands regardless of their political status. Attending delegations to the 12th PICL discussed issues such as the Pacific’s nuclear legacy, in the context of the Runit Dome, and ALPS-treated water, in the context of Japan’s plan to discharge such water from Fukushima; the increased engagement with the Pacific on behalf of larger powers such as the United States of America and the People’s Republic of China, including the sharing of views on how to manage relationships with these countries; the importance of women and gender equity and empowerment in strengthening Pacific Regionalism; how to diversify industry, such as novel ways to benefit from resources such as breadfruit; and the socialization of the 2050 Strategy for the Blue Pacific Continent with America Samoa, the Territory of Guam, the Commonwealth of the Northern Mariana Islands, and the State of Hawaii—who are members of the PICL but not the Pacific Islands Forum, and have since described their in-principle agreement with the strategy that the Pacific Islands Forum and its membership have thrust their full support behind.

“We have discussed many issues of regional import,” President Panuelo said in his closing remarks at the Conference. “Nuclear legacy and ALPS treated water; the increased engagement with the United States and China in our region; the need for all partners, including the United States and China, to interact with the Pacific on our level, and with recognition to what is important to us, such as the 2050 Strategy for the Blue Pacific Continent; how to diversify our industries, including how to utilize our native crops such as breadfruit in making value-added products; and the endorsement of the Pacific Women Leaders’ Coalition, which aligns with both regional and global goals.”

While there was a broad consensus across attending delegations that the 2050 Strategy for the Blue Pacific Continent can and should be the top priority moving forward as a Pacific Region (as the Strategy covers Climate Change, regional peace and security, economic growth and development, healthcare and education sector development, etc.), with respect to the Pacific Islands Development Program (PIDP—which is the Secretariat of the PICL), attending delegations agreed that PIDP is uniquely capable at handling and supporting islands in bridging the gap between the North and South Pacific. “Supporting PIDP in bridging this gap is something I am proud to do as Chair of the PICL,” President Panuelo said.

The PICL was founded in 1980 by the late Ratu Sir Kamisese Mara, former Prime Minister of the Republic of Fiji, and George Ariyoshi, former Governor of the State of Hawaii, to serve as a forum for Pacific leaders to address shared issues, learn from each other’s experiences, and develop common approaches to policy. The summit also provides enhanced opportunities for leaders to dialogue with US-based officials and experts, including Government officials and academics.

The FSM Government extends its appreciation to the State of Hawaii, PIDP, and the East-West Center for their combined support and efforts in making the 12th PICL a success.

We have 154 guests and no members online