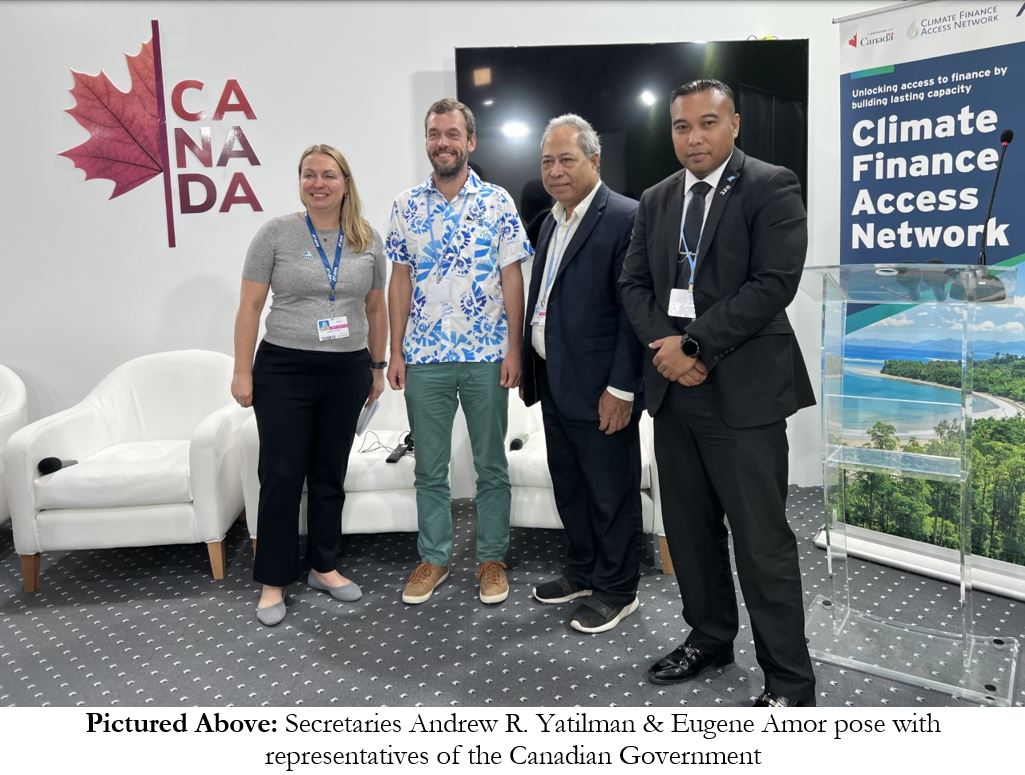 PALIKIR, Pohnpei—The Honorable Andrew R. Yatilman, Secretary of the Department of Environment, Climate Change, & Emergency Management, and the Honorable Eugene Amor, Secretary of the Department of Finance & Administration, recently participated in a special event on the margins of the 27th Conference of Parties of the United Nations Framework Convention on Climate Change held in Sharm El-Sheikh, Egypt. The purpose of the event was to announce that the Federated States of Micronesia (FSM), through support from the Government of Canada and the Climate Finance Access Network, will receive a designated and highly-trained Climate Finance Advisor, whose scope of work is to leverage financing for Climate Change-related action.

“We thank the Government of Canada, and the Climate Finance Access Network for extending this assistance to the FSM,” Secretary Yatilman said in a statement. “This assistance comes at the perfect time, since the FSM recently completed its Updated Nationally Determined Contribution (NDC), as well as its Updated Country Program for the Green Climate Fund.”

“We continue to face an uphill battle in accessing Climate financing,” Secretary Amor said. “This innovative solution will help [the FSM] to mobilize more Climate funds to implement our updated NDC and Climate Adaptation priorities, and at the same time to build local capacity at the FSM National and FSM State Governments in grant access.”

His Excellency David W. Panuelo, President of the FSM, offered the following statement: “The People and Government of the FSM extend our sincere appreciation to the People and Government of Canada for their support, through the Climate Finance Access Network, in acquiring for our country a Climate Finance Advisor. Every Pacific Island Country has correctly identified Climate Change as our Blue Pacific Continent’s most significant security risk, which is existential. As Adaptation to Climate Change becomes increasingly important, so too is it increasingly necessary that Pacific Small Island Developing States receive the required financial support to ensure that our countries not only still exist during our children’s lifetimes, but that our islands can also still support human life, and at a quality much higher than an abject humanitarian disaster.”

We have 297 guests and no members online