NEW CUSTOMS IT SYSTEM FOR THE FEDERATED STATES OF MICRONESIA TO BOOST INTERNATIONAL TRADE, ACCELERATE CLEARANCE OF IMPORTS & EXPORTS 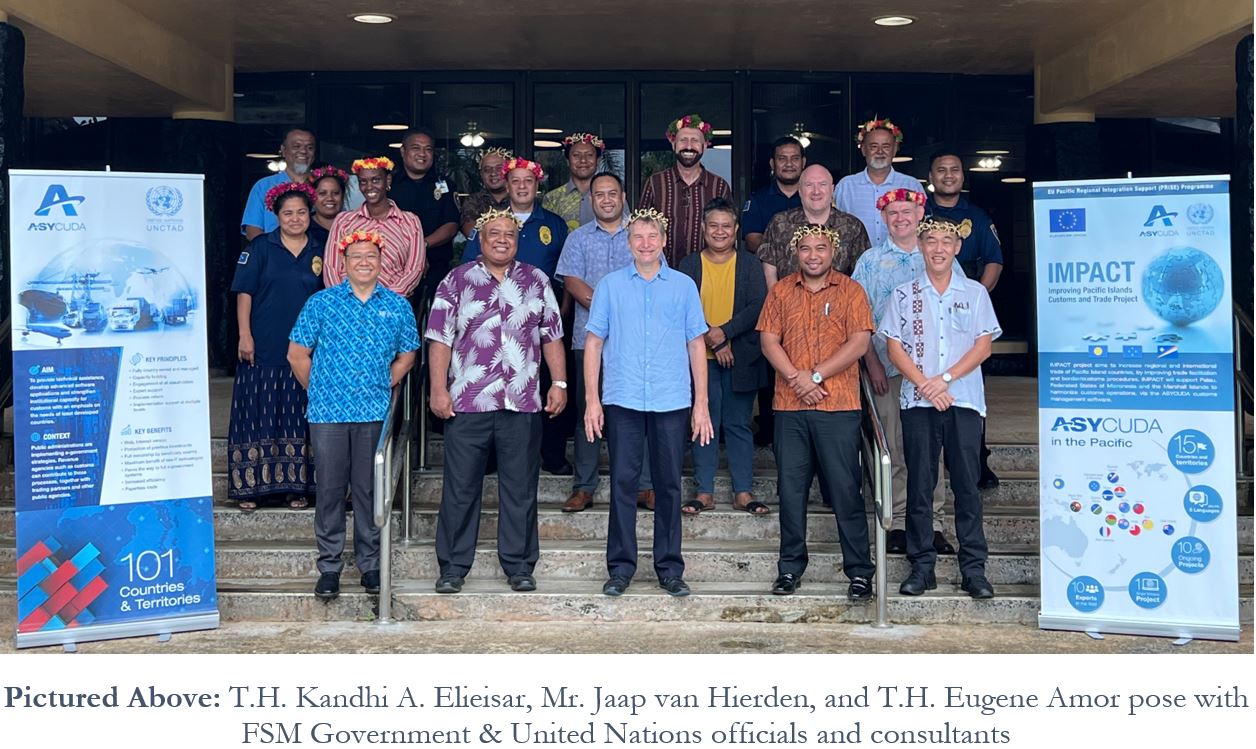 NEW CUSTOMS IT SYSTEM FOR THE FEDERATED STATES OF MICRONESIA TO BOOST INTERNATIONAL TRADE, ACCELERATE CLEARANCE OF IMPORTS & EXPORTS

(25 NOVEMBER 2022, POHNPEI) - The Federated States of Micronesia (FSM) is to modernize its customs procedures through the upcoming launch of ASYCUDAWorld - a cutting-edge customs management system developed by the UN Conference for Trade and Development (UNCTAD) to speed up customs clearance and facilitate international trade.

Funded by the European Union through the Improving Pacific Island Customs & Trade (IMPACT) Project, the practical effect of implementing ASYCUDAWorld for the FSM is that the Nation will see the strengthening of borders and customs procedures and the boosting of the FSM’s economy.

More than 100 countries worldwide have adopted ASYCUDA, attributed in part to the system’s capacity to increase customs revenue yield, the availability of reliable trade statistics, the reduction in average clearance time, and the less measurable but still highly valuable benefits of having a system known to the FSM’s friends, allies, and development partners, including economic partners.

His Excellency David W. Panuelo, President of the FSM, said “what excites me the most about ASYCUDAWorld and its adoption by the FSM, thanks to generous support from the European Union, is that this digital platform allows our Customs & Tax Administration under the Department of Finance & Administration to simplify and harmonize manifests and customs declarations, along with accounting, transit, and suspense procedures. This should make life easier for citizens, including private sector organizations, as well as enhancing our government’s capacity to fulfill its mandate in a transparent manner. In this regard, I extend, on behalf of the People and Government of the FSM, our deepest and sincerest appreciation to the European Union, and to our officials at our Customs & Tax Administration for their commitment to seeing this through for the benefit of our country.”

A mobilization seminar for ASYCUDAWorld was held in the FSM from November 24th to 25th, 2022, to raise awareness among government agencies, traders, and other key stakeholders on how the system will work in practice, explaining the new clearance processes and the need to improve trade facilitation and customs procedures.

Opening the two-day seminar, the FSM’s Secretary of Foreign Affairs, the Honorable Kandhi A. Elieisar, expressed the FSM Government’s gratitude to the European Union and UNCTAD for their support in reforming and modernizing the FSM’s customs administration.

The Secretary added that this step will drive the country’s customs to the next level of excellence and form the basis of a stronger and trusted partnership between the European Union, UNCTAD, and the FSM. “Since ASYCUDAWorld has been implemented in many Pacific countries, the system will help to harmonize us with the region and the world with our national and international trading activities,” the Secretary said.

The European Union’s IMPACT project is itself part of the Pacific Regional Integration Support (PRISE) program, which aims to increase the quality and the volume of goods traded intra-regionally between Pacific Island countries and internationally, including with the European Union’s 27-member States. FSM citizens may recall that another initiative of the PRISE program includes the FSM’s hosting of a subregional Trade Adviser.

However, Mr. Camassei pointed out that Economic Partnership Agreements are not enough. “This is the reason why the European Union is also committed to regional economic integration in the Pacific, through a support project implemented in partnership with regional and international organizations such as the Pacific Islands Forum, the Pacific Community, and UNCTAD.”

When implemented, the ASYCUDAWorld system will benefit businesses in FSM and those looking to do business with them by facilitating faster, easier, and more affordable cross-border trade. By ensuring that all processes are harmonized and simplified, items can be declared, and the proper duties collected online, ASYCUDAWorld will help the FSM optimize its customs processes and increase government revenue.

“It is very reassuring to know that government programs like these are being devised that actively involve all stakeholders and incorporate their feedback.”

Regional Coordinator for the ASYCUDA program in the Pacific, Mr. Jayvee Santos, stated that UNCTAD’s mission is to provide the latest technology to customs organizations in the Pacific.

“The private sector is well advanced in terms of adopting modern technology and tools. The ASYCUDA program ensures that customs administration is able to keep up to using the latest technology available so that they are able to carry out their work efficiently,” Mr. Santos added.

The PRISE program supports Pacific Island states to trade more effectively and efficiently, by increasing their capacity to access and benefit from international markets. The $27.25 million USD (€26.25 million) program is funded by the European Union and implemented by the Pacific Islands Forum Secretariat, the Pacific Community, and UNCTAD.

We have 160 guests and no members online