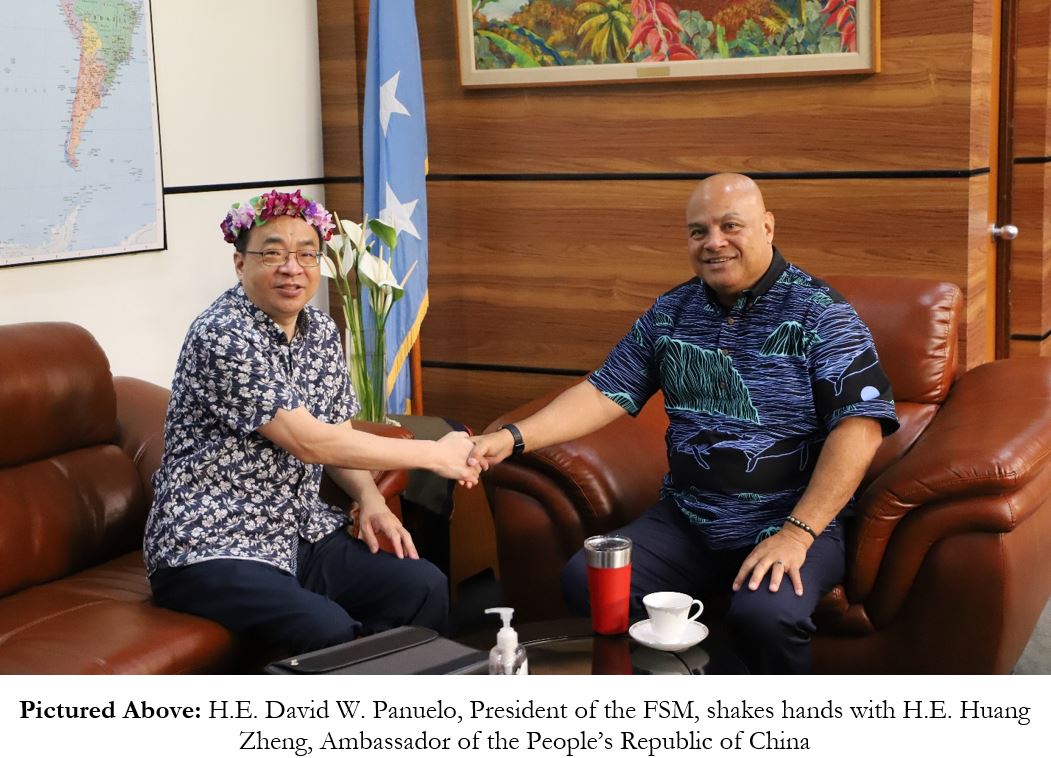 PALIKIR, Pohnpei—Recently, His Excellency David W. Panuelo—President of the Federated States of Micronesia (FSM)—and the Honorable Aren B. Palik, Vice President of the FSM, received His Excellency Huang Zheng, Ambassador of the People’s Republic of China (China), in a courtesy call. The purpose of the meeting was for the Ambassador to pay his respects to the President and Vice President and to announce that his service as Ambassador of China to the FSM is coming to a close. The Ambassador will depart the FSM later in the month of December, 2022.

During the meeting, Ambassador Huang relayed his appreciation to the People and Government of the FSM for strengthening the Great Friendship between our two countries, and reminisced about some of his favorite memories in the FSM. The Ambassador congratulated the FSM for its expertise in addressing the COVID-19 Pandemic, and relayed his satisfaction that China has been able to contribute much to the FSM’s development over the course of his service as Ambassador of China, such as the 2019 State Visit to China, and numerous infrastructure projects, such as the Chuuk State Government Complex, the FSM National Convention Center still undergoing construction, the Kahmar Bridge, and the secondary roads in Lukop, Madolenihmw.

As a final gesture of the Ambassador’s service to the FSM and the Great Friendship between the FSM and China, Ambassador Huang entertained the Honorable Wesley W. Simina, Speaker of the 22nd FSM Congress, the Honorable, Kandhi A. Elieisar, Secretary of the Department of Foreign Affairs, and Mr. Alfred Ansin, representing the Honorable Florencio S. Harper, at the Embassy of China in the FSM for a short ceremony. The primary purpose of the ceremony was for FSM leadership to sign the condolence book for the passing of His Excellency Jiang Zemin, the former President of China.

After signing the condolence book and exchanging views on the legacy of President Jiang, Ambassador Huang and Mr. Ansin signed relevant papers sourcing financial support from the Embassy of China’s discretionary fund, wherein China has donated $190,000 for the purpose of constructing a gymnasium on Satowan Atoll in the State of Chuuk. The gymnasium is one of several such infrastructure projects in the FSM financed by the Embassy’s discretionary fund over the years, including other gymnasiums in the States of Pohnpei and Kosrae, such as the Utwe Gymnasium.

We have 100 guests and one member online