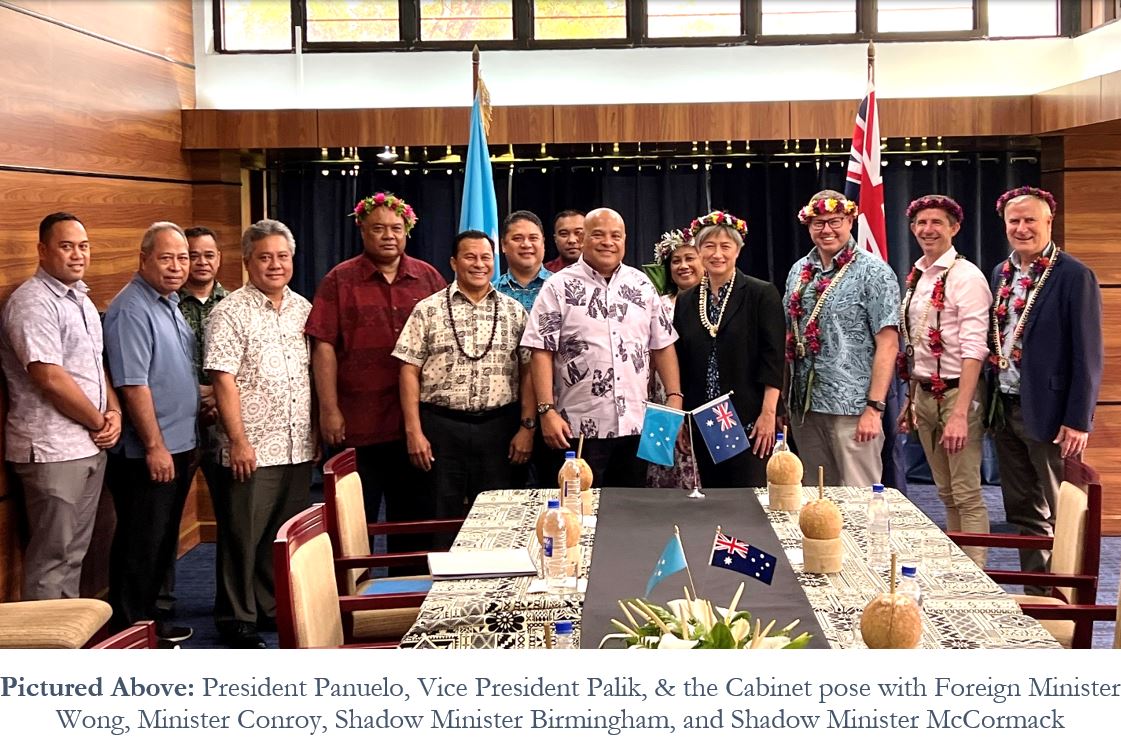 The primary purpose of the engagement was for the FSM and Australia to celebrate 35 years of diplomatic relations. In this respect, President Panuelo highlighted in detail the FSM’s appreciation for its relationship with the People and Government of Australia.

“When our citizens faced the COVID-19 Pandemic, Australia was there to support the FSM,” President Panuelo said, noting that the Australian Ambassador and/or her senior staff attended COVID-19 Task Force meetings, providing information and honest feedback.

“When our citizens are lost at sea or stranded on remote islands, or illegal fishers threaten our livelihoods, Australia was there to support the FSM,” President Panuelo said, noting that the Pacific Patrol Boat Program and the Maritime Security Advisors worked, often hand-in-hand with FSM Maritime Police, to literally save FSM citizens from harm’s way.

“When our children were performing poorly, compared to other Pacific countries, in mathematics and English, Australia was there to support the FSM,” President Panuelo said, highlighting the Improving the Quality of Basic Education program that provides new teaching materials and superior teaching pedagogy for the FSM’s students, as well as directly funds multiple consultants based in the FSM’s states and the National Department of Education.

“When we assessed that shipwrecks from World War II might leak oil into our lagoons, Australia was there to support the FSM,” President Panuelo said, noting that Australia quickly joined forces with the Japan Mining Action Team (JMAS) for the important work of determining which vessels might be at the most risk of leaking oil and attempting to prevent or mitigate that leakage, whose work continues today.

“When our Blue Pacific Continent risked fracturing…Australia was there to support the FSM,” President Panuelo said, highlighting that the Suva Agreement is itself evidence that patient and competent Australian diplomacy yields handsome dividends—for Australia, for the FSM, and for the Pacific.

“What I have described, I feel, is a partnership,” President Panuelo said, “A partnership where we genuinely trust each other, and genuinely cooperate together in the Pacific Way. It’s the kind of partnership that deserves a name.”

“It is fitting, then, that we mark this 35th year of diplomatic relations between our two countries with a name that accurately represents who we are to each other, and who the Australian People are to the People of the FSM. That’s why, today—and in celebration of our 35th anniversary—I pronounce our relationship the FSM-Australia Trusted Pacific Partnership, because we genuinely trust each other, because we genuinely cooperate together in the Pacific way, and because we genuinely partner together for the mutual benefit of our People.”

Beyond the festive and ceremonial aspects of the engagement—such as a sakau ceremony and traditional dancing—President Panuelo, Vice President Palik, and the Cabinet received Foreign Minister Wong and her delegation in an extensive bilateral discussion. The bulk of the conversations focused on maritime security, education programming, and Pacific regionalism.

Many of the questions directed to President Panuelo and Foreign Minister Wong were regarding the geopolitical situation in the Blue Pacific Continent. When asked whether the FSM ever felt sandwiched between two major superpowers—i.e. the United States of America and the People’s Republic of China—President Panuelo said his “direct, resounding answer” was no, because the FSM “is a friend to all and an enemy to none.” The President then reiterated the Nation’s commitment to preserving the rules-based international order, and the FSM’s appreciation for Australia’s commitment in doing the same.

Citizens unfamiliar with the distinction, as the FSM has no equivalent, may appreciate that in Australia’s system of governance, a Shadow Minister is a member of the opposition party who serves as counterpart to the Minister proper, which lends credibility and transparency in governance. A Shadow Minister does not have the decision-making power the Minister has, but sees all of the work the Minister engages in, so as to offer feedback and critical analysis.

When asked about what he views as threats to security and stability in the Blue Pacific Continent, President Panuelo said “We cooperate with every like-minded country to make sure that we are a country with rule-of-law, that we preserve the international rules-based order, and that we look at our systems of democracy to make sure that we represent our Nation in areas of peace, security, and economic cooperation. We have to be a nation that loves peace. And if we don’t love peace, then we are not respecting the sovereignty of other nations, human rights, individual rights, and democracy itself. We are a harmonious Blue Pacific Continent, and we would say that every country that comes in to engage with our Pacific family has to respect that rules-based international order.”

Following the Press Conference, the FSM’s leadership and the Australian delegation enjoyed a luncheon, inclusive of formal remarks by the respective principals. President Panuelo and Speaker Simina, in their separate remarks, both highlighted the FSM’s continued and deep appreciation of the People and Government of Australia, and noted that the FSM Government remains committed to establishing a formal Embassy of the FSM in Canberra at the nearest opportunity.

The FSM-Australia Trusted Pacific Partnership has endured for more than 35 years, and it is the intent of the FSM Government that the relationship continues to grow in strength and endurance over the decades to come.

We have 502 guests and no members online