Secretary of Justice Represents the FSM at Indonesia-Pacific Forum for Development; AG Gallen Meets with Philippine’s Department of Migrant Workers Regarding Labor Ban 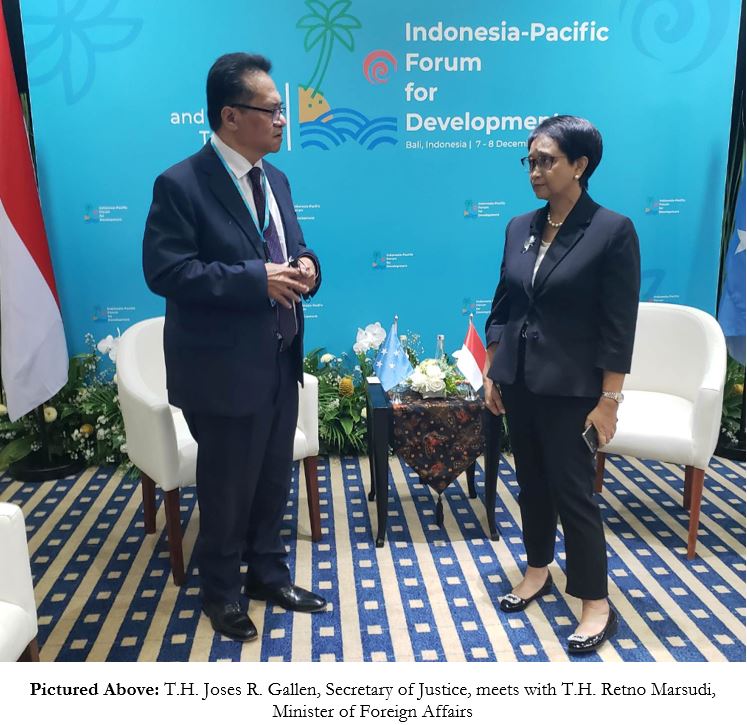 Secretary of Justice Represents the FSM at Indonesia-Pacific Forum for Development; AG Gallen Meets with Philippine’s Department of Migrant Workers Regarding Labor Ban

PALIKIR, Pohnpei—In the first weeks of December, 2022, the Honorable Joses R. Gallen—Secretary of the Department of Justice of the Federated States of Micronesia (FSM)—recently sojourned to the Republic of Indonesia and the Republic of the Philippines for multilateral and bilateral engagements. For the former, the Secretary represented the FSM at the Indonesia-Pacific Forum for Development held in Bali; for the latter, the Secretary met with officials in the Philippine’s’ Government regarding the ongoing ban on labor deployment.

Following the High-Level dialogue, the Secretary met with the Honorable Retno Marsudi, Minister of Foreign Affairs of the Republic of Indonesia, to discuss some of the FSM’s pending issues of mutual interest. Among these include overlapping claims of extended continental shelf on the Eauripik Rise Area. The FSM had lodged its claim in 2013, whereas Indonesia had lodged its claim in 2018. According to the rules of the Commission on the Limits of Continental Shelf, the overlapping claim shall have no prejudice on the issue of delimitation (i.e. both claimants should cooperate with each other). In case of dispute or objection, then neither claim will be considered by the Commission.

Prior to the COVID-19 Pandemic, the FSM and Indonesia met in Canberra, Australia, to discuss cooperation for the Eauripik Rise. It was agreed at the time that a memorandum of understanding will be signed by the two sides that will speak of mutual intention to cooperate. The FSM considered a draft memorandum of understanding proposed by Indonesia and has been awaiting additional reactions from Indonesia since February 28th, 2020.

Secretary Gallen advised the President of the FSM, His Excellency David W. Panuelo, that Minister Marsudi described that Indonesia submitted its claim on the Euaripik Rise in 2018, awaiting a no-contest reaction by the FSM, allegedly not being aware that the FSM is also awaiting further reaction from Indonesia. Secretary Gallen and Minister Marsudi agreed that, on the premise that both sides were operating on the understanding that they had submitted claims awaiting a no-contest by the other, that technical staff from the respective governments will initiate communications through formal channels in finding out the status of the claims made by both countries.

Additionally, Secretary Gallen spoke with Minister Marsudi regarding a visa waiver agreement between the FSM and Indonesia signed by both parties in 2018. It was the intention of the FSM Government that the 21st Congress of the FSM ratify the agreement, though due to the COVID-19 Pandemic the 21st Congress prioritized the health and wellbeing of the Nation’s citizens. Thus, Secretary Gallen advised Minister Marsudi that the Executive Branch will resubmit the agreement to the 22nd Congress of the FSM for its action in the Regular Session to occur in January, 2023.

After the meeting with Minister Marsudi, Secretary Gallen attended a dinner hosted by the Secretary-General of the Pacific Islands Forum, the Honorable Henry Puna. Secretary-General Puna described several plans for potential high-level and high-visibility visits to the Pacific in 2023 that, when further concretized, and upon consultation with member countries, will be formally communicated.

Following the Indonesia-Pacific Forum for Development, Secretary Gallen traveled to the Philippines to meet with the Department of Foreign Affairs and the Department of Migrant Workers to discuss the lifting of the deployment ban of new workers from the Philippines to the FSM. The Philippines Government had previously initiated a ban on the deployment of new workers to the FSM in August, 2018, after mounting complaints of labor abuse by local employers in the States of Chuuk and Pohnpei.

After President Panuelo met with His Excellency Ferdinand “Bongbong” Romualdez Marcos Jr., on the margins of the 77th United Nations General Assembly in New York this previous September 2022, it is the understanding of the FSM Government that the Government of the Philippines intends to work with the FSM in order to lift the deployment ban on new imported labor. Discussions with the Department of Migrant Workers suggested to Secretary Gallen that the process for lifting the ban will take time, however; the FSM Government is not aware, at the time of this release, when the lifting of the ban will occur, though discussions between the FSM and Philippines Governments remain positive.

Upon the conclusion of the meetings with the Department of Foreign Affairs and the Department of Migrant Workers, Secretary Gallen met with the Chief of the Philippines National Police, Police General Rodolfo Azurini Jr., on the latter’s offer to usher in the FSM’s applications to obtain observer status to ASEANAPOL, the law-enforcement-focused organization formed through the Association of Southeast Asian Nations (ASEAN). Chief of Police Azurini confirmed the Philippines’ interest in supporting the FSM’s application to ASEANAPOL and advised that he will work with the FSM Department of Justice in ways forward on this.

Of significant interest to the FSM’s citizens may include that Secretary Gallen and Chief of Police Azurini broadly concurred on a proposed police training agreement. A draft agreement is to be sent to the FSM for the President’s review and consideration and, if accepted, would see the agreement signed between Secretary Gallen and Chief of Police Azurini in January 2023. The practical effect this would have for the FSM is that—in addition to ongoing police training programs e.g. with the United States of America and Australia—the FSM’s police forces would benefit from, and engage in, training programs with the Philippines National Police.

Secretary Gallen later met with Philippines Consul General, Mr. Patrick John Hilado, in Guam and shared with him the outcome of the Manila meeting regarding progress on the lifting of the deployment ban.  The Consul General had expressed his great appreciation of the in-person meeting with Secretary Gallen and that his office is working closely with the Department of Migrant Workers in the Philippines to substantiate the FSM’s intent and interest to conclude a bilateral labor agreement with the Government of the Philippines based on compliance and previous communications between the two (2) Governments.

The FSM Government appreciates the work of Secretary Gallen and the Department of Justice in representing our Nation in Indonesia and the Philippines. Secretary Gallen returned to the FSM on December 17th, 2022.

We have 130 guests and one member online