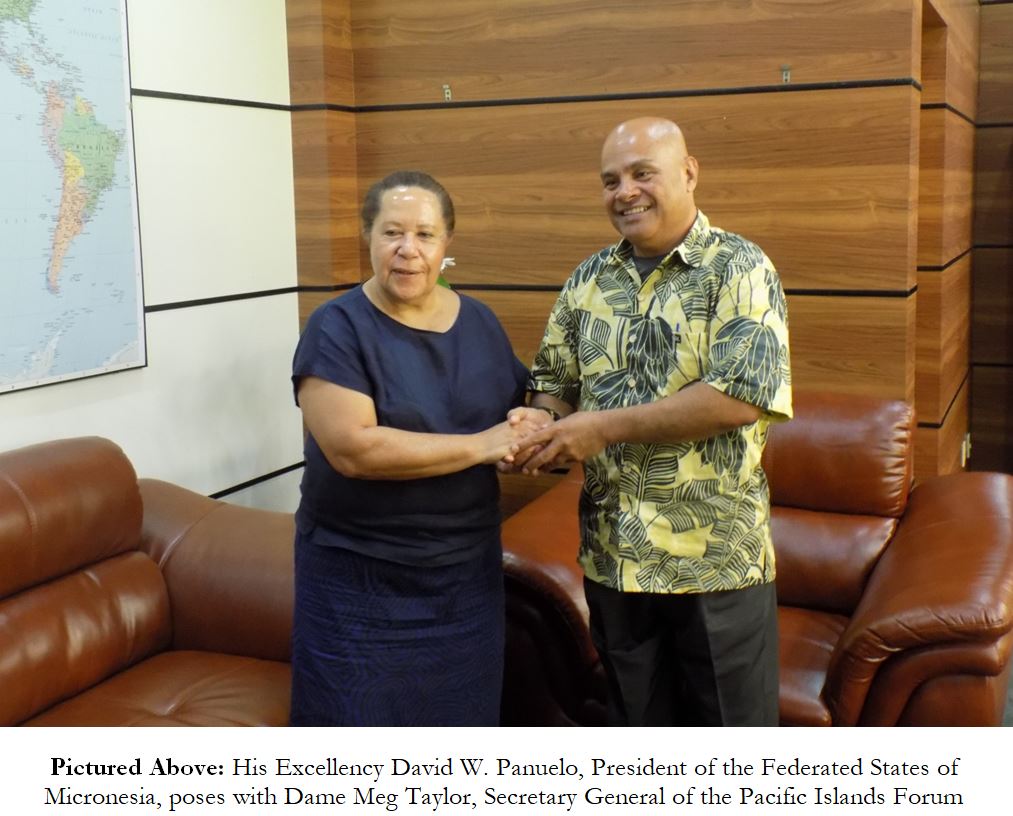 PALIKIR, Pohnpei—On June 18th, 2019 His Excellency David W. Panuelo, President of the Federated States of Micronesia (FSM), received Dame Meg Taylor, Secretary General of the Pacific Islands Forum (PIF), in a courtesy call. The purpose of the meeting was to discuss the upcoming PIF meeting in Tuvalu in August, 2019, and the FSM’s position on key regional issues such as climate change and nuclear waste storage.

“Mr. President, in the [PIF meeting held in the Republic of Nauru in 2018], the leaders made the decision that climate change is the greatest security threat,” said Dame Taylor. “[The PIF] will be interested in your views.”

“Our position has never changed, and will never change,” said President Panuelo. “This administration, I have already put out the notice that…the environment of our Nation will be at the top of the agenda.”

President Panuelo referenced the relatively recent transformation of the Office of Environment & Emergency Management with a Director as its designated head to the Cabinet-level Department of Environment, Climate Change, & Emergency Management with a Secretary as its designated head, as well a bill in the Congress of the FSM to ban most forms of plastic, in support of the FSM’s stance on being climate positive.

“At the State-Level, we have amended our law to push the no-commercial fishing zone from 12 miles to 24 miles,” continued President Panuelo. “And we’re partnering with big powerhouse environment organizations, including the Waitt Foundation & Institute, Oceans 5, and the National Geographic Society.” President Panuelo emphasized his hope that the FSM become a paragon example of an environmentally friendly country.

Dame Taylor also asked President Panuelo his views on nuclear waste storage, in light of recent media reports that a storage facility in the Republic of the Marshall Islands may or may not be leaking radioactive material into the Pacific Ocean.

“The issue now is the suggestion that the dome is leaking…[and if true], the implications for life is very important,” said Dame Taylor. “I’d be interested in your view on the nuclear issue…if anything is happening at the dome, and there’s leakage, it affects all of us.”

President Panuelo emphasized his acute understanding of the issue. “We’re closer [to the Republic of the Marshall Islands] than most countries…during the [time of nuclear testing] there were talks that even maybe our country has been effected by mushroom clouds.”

Pingelap Atoll, a municipality within Pohnpei State and the FSM community closest to the communities affected by nuclear testing in the past, is less than 500 miles from Bikini Atoll, 385 miles from Enewetak Atoll, and 251 miles from Ujelang Atoll. Enewetak Atoll is home to Runit Island, where an 18-inch thick concrete dome was built over radioactive waste—itself the result of nuclear testing in the 1950s. International media reports have suggested that the dome may or may not be leaking, in part due to cracks in the dome and in part because the crater the dome covers was never lined.

“We can [do objective testing to determine if there is a legitimate threat or not] in a way that can be cordial with the United States,” continued President Panuelo. “If we say we want an independent audit by the [International Atomic Energy Agency]…”

“What is lacking is independent verification,” said Dame Taylor. “Which frightens people.” Dame Taylor strongly suggested that an independent audit of the nuclear waste site in Enewetak Atoll, even if—perhaps particularly if—it showed no harm is being done would go a long way towards calming citizens around the world. Conversely, if the dome is shown to be leaking radioactive material, and such material is known to be harmful to living things, then the results of such an audit will inform future decision-making by Members of the PIF and the United Nations, including the FSM.

“We’re sensitive to these issues,” replied President Panuelo. “And even though it’s sensitive, I don’t think we should shy away from it...as a region we have the right to band together…I think the United States will understand that, we have close ties with them.”

After additional discussion on other issues of regional interest, the meeting concluded on a very positive note, with President Panuelo clearly showing his appreciation for having been able to formally meet Dame Taylor for the first time. They had met earlier in the day at the opening of the 16th Ministerial Forum Fisheries Committee Meeting.

“It was an honor to meet you,” said President Panuelo.

Dame Taylor, for her part, commented on her reception in the FSM. “The food is good and the hospitality is wonderful.”