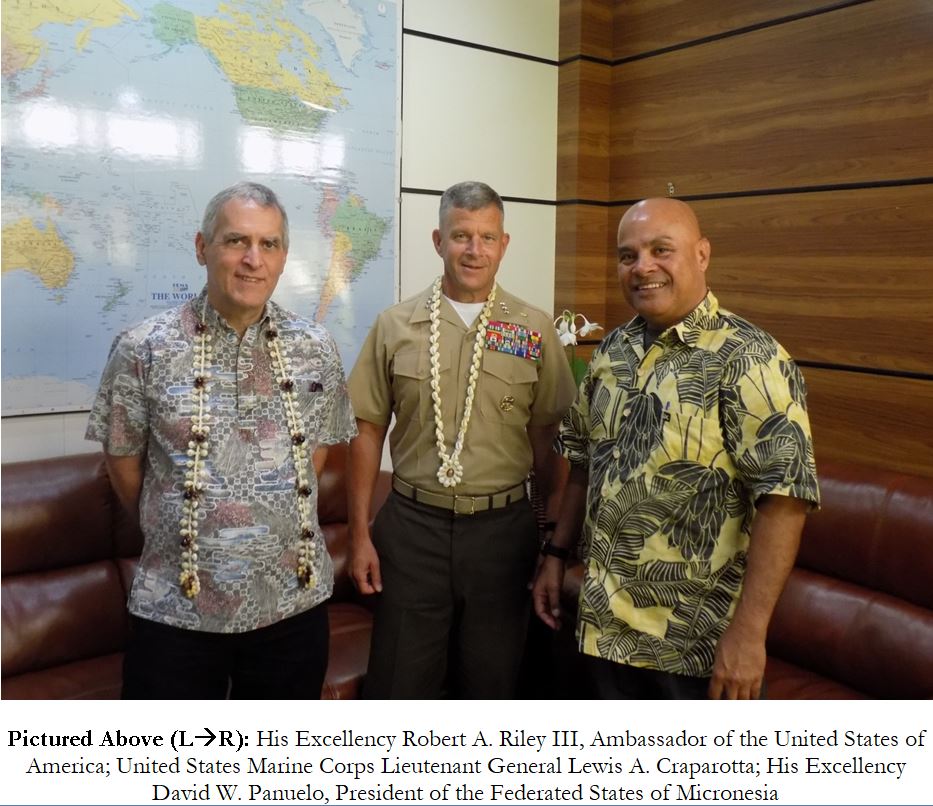 PALIKIR, Pohnpei—On June 18th, 2019, His Excellency David W. Panuelo received the Commander of the U.S. Marine Corps Forces Pacific, Lieutenant General Lewis A. Craparotta, in a courtesy call. The purpose of the meeting was to discuss a renewed strengthening of FSM-U.S. relations as it pertains to regional security and defense, including the increase in operational joint exercises, and U.S. assistance and presence, to include a military attaché to the U.S. Embassy in the FSM.

President Panuelo relayed to Lieutenant General Craparotta and His Excellency Robert A. Riley III, U.S. Ambassador to the FSM, his recognition and appreciation for the addition of a defense attaché function within the U.S. Embassy to the FSM.

President Panuelo also acknowledged and was appreciative of the United States’ efforts to increase its presence in the region and expressed his support for more U.S. Department of Defense engagement, and expressed interest in learning about these activities.

“Koa Moana is one effort,” said Lieutenant General Craparotta, who, in conjunction with Ambassador Riley, spoke about additional friendship and assistance programs, such as Pacific Partnership, and regional security programs.

The FSM has the highest per capita enlistment rate into the U.S. Military of anywhere in the world, including every U.S. State.

“As your close ally, you can always count on your partner: the Federated States of Micronesia,” affirmed President Panuelo.

The FSM is dedicated towards producing positive and peaceful relationships with all countries and peoples throughout the world. The relationship between the FSM and the U.S.A. is particularly special, and it’s the hope and goal of the FSM National Government that the enduring partnership between our two countries shines ever brighter with each passing day.