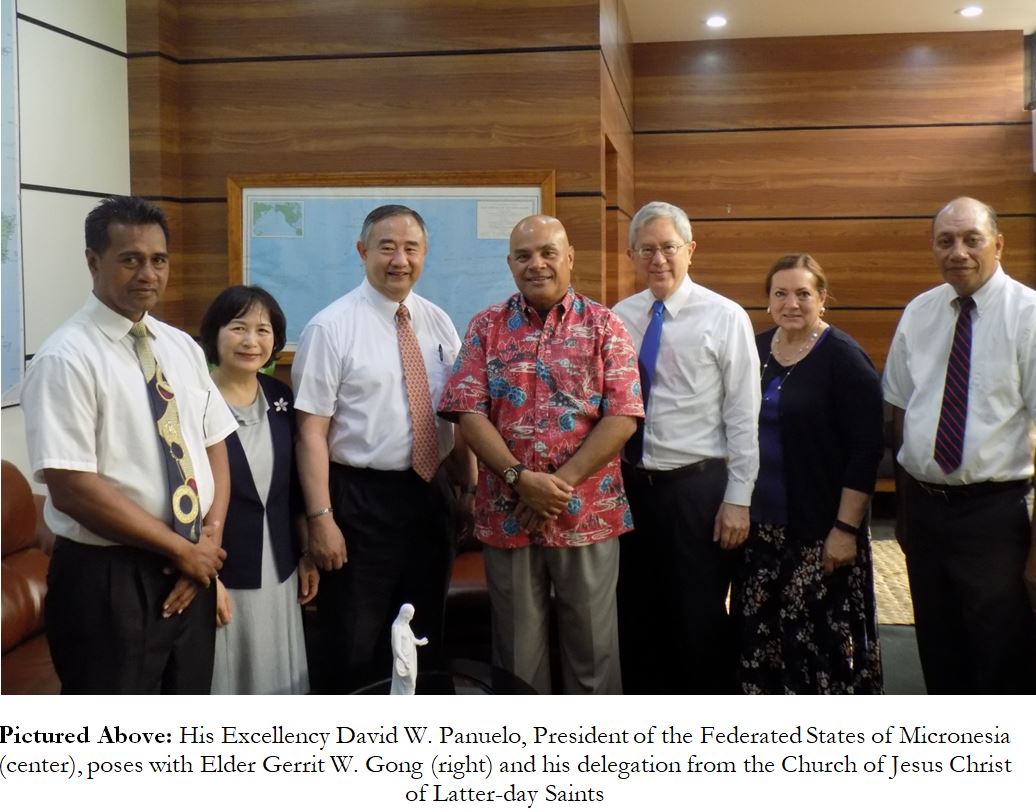 PALIKIR, Pohnpei—On June 11th, 2019 His Excellency David W. Panuelo, President of the Federated States of Micronesia (FSM), received Elder Gerrit W. Gong, Member of the Quorum of the Twelve Apostles of The Church of Jesus Christ of Latter-day Saints (LDS Church), and a regional LDS Church delegation in a courtesy call. Key outcomes of the meeting were details regarding President Panuelo’s forthcoming visit to the U.S. State of Utah in October 2019, and affirmation on the part of the FSM for freedom of religion for all citizens and residents.

“I welcome you on behalf of our Vice President and our citizens of the FSM…thank you for having the wherewithal to commit to service in the FSM. …[Regarding the] expansion of your churches across our nation…we definitely welcome that,” said President Panuelo. “Your Elders who go around and pray with families is, I feel, a very honorable thing.”

Elder Gong spoke of how members of the LDS Church are committed to service in partnership with the communities they’re based in. “Strong families make strong countries,” said Elder Gong. “We honor and obey and sustain the law and teach our members to be good citizens.”

“We’re honored to have you in our country…our Constitution guarantees the freedom of religion,” said President Panuelo. The President previously advised Bishop Julio Angkel of the Catholic Church, in May 2019, that his administration is committed to cooperation, involvement, and outreach with governmental, culturally traditional, and religious leaders of all backgrounds, with the goal of ensuring prosperity of the Nation and all of its citizens.

President Panuelo has been invited by Brigham Young University and the LDS Church to provide a presentation and speech for the 26th Annual International Law & Religion Symposium to be held in the U.S. State of Utah in October, 2019. These well-attended annual symposia view matters of State and Religion from philosophical, legal, and practical viewpoints, with emphases on the promotion of civil rights and religious liberty.

We have 269 guests and no members online