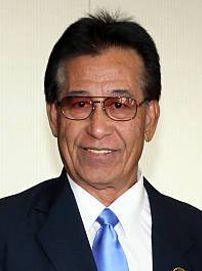 Emanuel (Manny) Mori is the seventh President of the Federated States of Micronesia. He was selected by 15th FSM Congress and sworn into office on May 11 2007.

President Mori has a collage of financial management experiences in the private sector and brings a realistic, no-nonsense approach to his services as an elected public official. He is regarded highly amongst his colleagues for his candid and often tenacious approach to fiscal discipline.

President Mori was born December 25 1948, on Fefan island, in Chuuk State. He graduated from the Xavier High School in Chuuk and earned a Bachelor of Arts degree in Business Management from the University of Guam.

Subsequent to the establishment of Federated States of Micronesia as sovereign entity in 1979, President Mori became the first National Revenue Officer for the newly established government of the State of Chuuk.

After two years with the Chuuk State Government, President Mori was hired as the comptroller of the new FSM Development Bank. In 1984, within three years of joining the bank, Mori was promoted President and Chief Executive Officer of the FSMDB. In 1997, after six years with the FSMBD, Mori moved to the Bank of the Federated States to take over the post of Executive Vice President of the Bank. He maintained his position as the Executive Vice of the FSM Bank until his election to the Congress of the FSM.

President Mori entered the political arena in 1999 when he was elected as Chuuk State’s at-large or four-year representative to the 11th FSM Congress where he held dual Vice Chairmanship on the committee of Judiciary and Governmental Operations (J&GO) and the committee on Health Education and Social Affairs (HESA).

In 2001, during the organization of the 12th FSM Congress, President Mori took over Chairmanship of the committee on Ways and Means whilst retaining his membership on the committees served during the previous Congress.

In 2003, President Mori went on a hiatus from politics and accepted the position of General Manager and Chief Executive Officer for the ailing Chuuk Public Utilities Corporation. Under his management, the Corporation undertook and successfully executed measures of progressive reform which include the restoration of 24-hour power services to Weno, the capital island of Chuuk State.

The following year, President Mori re-entered the political arena as his home state’s four year or at-large representative to the 13th FSM Congress. In that Congress he served as Vice Chairman of the Committee on External Affairs with membership on the other committees.

During the reorganization of the 14th FSM Congress in 2005, President Mori became the Chairman of the Committee on Resources and Development with membership on the other committees.

In his varied career over the years, President Mori had remained a strong supporter of community affairs. He was a member of the Saipan Chamber of Commerce and Chuuk Atawe Club. He held memberships on the Board of Directors for the Bank of FSM, the FSM Development Bank and the Pacific Island Development Bank.

President Mori also served on the Planning Council for the College of Micronesia-FSM and a member of the taskforce for the FSM National Government Restructuring.

President Mori is married to the former Emma S. Nelson and has four grown daughters from his late wife.