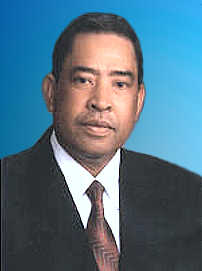 Vice President Alik L. Alik was one of the Federated States of Micronesia’s seasoned diplomats, representing the nation in countries across and throughout the Asia-Pacific region for over eighteen (18) years.

Vice President Alik was born in the State of Kosrae on January 26, 1953. He completed high school in 1973 and left the islands in pursuit of higher education in the United States. Vice President Alik attended the United States International University in Hawaii from 1973 to 1976 and went on to Graceland College in Iowa from 1976 to 1979. While in Iowa, he was awarded an internship by the Government of the Trust Territory of the Pacific Islands (TTPI) to work in the Department of Education.

Vice President Alik returned to Kosrae and worked the next two (2) years as a student counselor at the Kosrae High School. In 1982, he attended the Paralegal Program at the University of Hawaii Law School. Upon completion of the two year program, he was employed as a law clerk at the FSM Supreme Court. Within the same year, Vice President Alik was hired as a Foreign Service Officer for the FSM Department of External Affairs and promoted to Deputy Chief for the Division of South Pacific Affairs. In 1989, he became the FSM’s first Ambassador to Fiji (1989-1998). While in Fiji, Vice President Alik was cross-accredited as FSM’s Ambassador to: Israel, Tonga, Nauru, Kiribati, Samoa, Tuvalu, Solomon Islands and Vanuatu. During the same tenure, he held the distinct honor of being the Dean of Diplomatic Corp in Fiji from 1992 to 1998.

In March 2007, Vice President Alik was re-elected as Kosrae State’s four-year representative to the 15th FSM Congress. On May 11, 2007, he was sworn in as the Seventh Vice President for the Federated States of Micronesia.

Vice President Alik is married to the former Shra C. Lono and they have two (2) children, Greg and Ursulla.

We have 684 guests and one member online