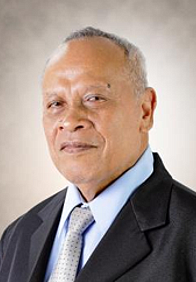 The Honorable Yosiwo Palikkun George is the 8th Vice President of the Federated States of Micronesia (FSM).


George was born in Kosrae on July 24th, 1941. His rich and varied public and political life started during the Trust Territory of the Pacific Islands (TTPI) and has continued through today. His public service experiences began as an Engineer Trainee at the Pohnpei Transportation Authority, later as a classroom teacher in Kolonia Elementary School, and then as the TTPI Social Security manager in Saipan.

George later served as Kosrae's Lieutenant Governor for a partial term, when he was appointed by the 1st President of the FSM, Tosiwo Nakayama, as the Director of Department of Social Services with foci on health, education, and community services.

After many accomplishments in the Department of Social Services, George was reminded again of his home in Kosrae, and ran for Governor of Kosrae State, where he served two full and consecutive terms. George was then appointed by President Bailey Olter to serve as the Ambassador of the FSM to the United Nations, where he served with distinction for three years.

International service on behalf of the FSM inspired George to run for a seat in the Congress of the FSM, and in the 10th Congress he began his service as a Senator for four years. George was later appointed by Governor Rensley Sigrah to serve as the Chief Justice for Kosrae State Court, where he served until 2006 when he was then called upon by President Manny Mori to serve as the Administrator for MiCare. After several years of dedicated service, President Mori appointed George to be the Ambassador of the FSM to the United States, which additional accreditation to the State of Israel.

George's education began at Malem Elementary School, and in 1957 he moved to Pohnpei to attend Pohnpei Intermediate School and then on to Pacific Island Central School (PICS), where he graduated in 1963. George then attended the College of Guam (now the University of Guam) under the Trust Territory Scholarship, and transferred to the University of Hawaii under the East-West Center Scholarship. While at the East-West Center, George participated in a student-exchange program at the University of Mexico. George graduated with a B.S. in Mathematics in 1969, and spent one year of graduate school at Ball State University in Indiana whilst working for the TTPI's Social Security Program.

Yosiwo Palikkun George is married to Antilise W. Mackwelung George, and they are blessed with seven children and more than ten grandchildren

We have 572 guests and no members online