“I Hope That Our [Compact Negotiations] Can Reflect the Maturity of Our Two Countries At This Time & In This Stage of Our Relationship”, President Panuelo Tells U.S. Interagency Visiting Team 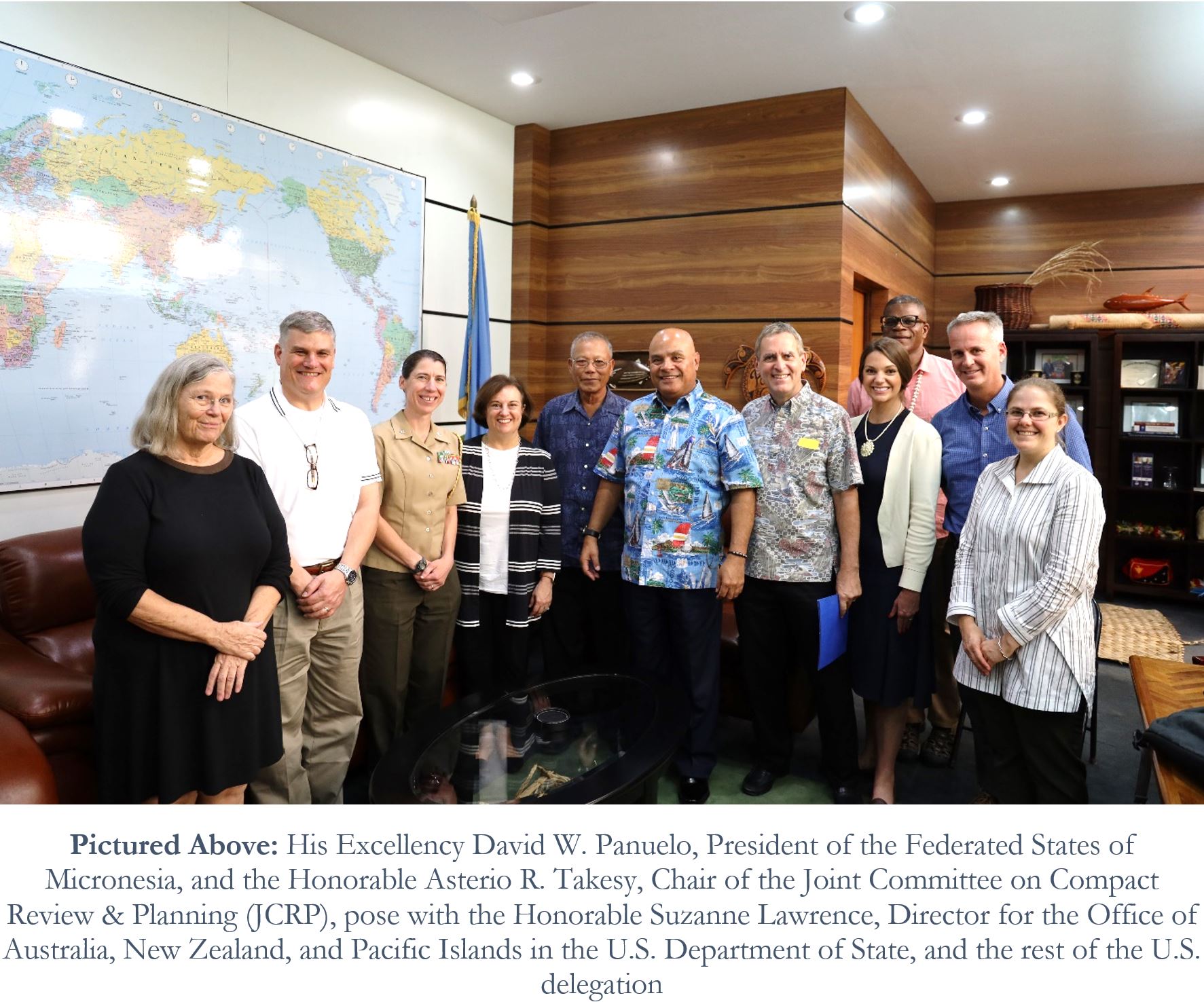 “I Hope That Our [Compact Negotiations] Can Reflect the Maturity of Our Two Countries At This Time & In This Stage of Our Relationship”, President Panuelo Tells U.S. Interagency Visiting Team

“In our meeting with [the Honorable] David Hale, [Under Secretary of the U.S. Department of State], we were told about this team,” President Panuelo began. “So welcome. We’re going to be listening to you, what you have to say. But I believe that it is important that, number one, when you leave, we have some framework of negotiation parameters; and number two is the timeframe [by which to commence the Compact negotiations].”

President Panuelo described the close and enduring relationship between the FSM and the U.S., noting again—and emphasizing that he’d repeat it as often as possible—that the U.S. is the Nation’s first and foremost ally. The President noted his appreciation for the close attention the Nation has received from the U.S. in his administration so far, and from all levels, including multiple visits to Washington, D.C on behalf of the FSM to visit the U.S. Government, including the historic visit with His Excellency Donald J. Trump, President of the United States, in May, and the visits from the Honorable Robert L. Wilkie, Secretary of the U.S. Department of Veterans Affairs, and the Honorable Michael “Mike” Pompeo, Secretary of the U.S. Department of State, to the FSM in July and August 2019 respectively.

“We appreciate that so much has happened, and we’re grateful because we’re ready to begin talking parameters [on the Compact negotiations] going forward,” President Panuelo continued. “But what I want to say, and I’ll say it again, is that I hope that our talks can reflect the maturity of our two countries at this time, and in this stage of our relationship, and that we can see what bottlenecks might have been there…that we try to clean out some of those things.”

The President described his vision of seeing, among other things, infrastructure funding from the Compact freed up so that it can be used in a manner that is both highly effective and highly visible.

Director Lawrence was quick to note her team’s appreciation for hearing what the President had to say with regards to the upcoming negotiations, and also with regards to his proactive stance on meeting with U.S. Government officials. The Director advised that it was her hope that, upon the completion of the interagency team’s travels, there will be momentum in the U.S. Government to move the negotiation process forward.

“Thank you for having us,” Director Lawrence said. “And for starting us off on the right foot. As [Secretary Pompeo] said—we want to get this right, so I think taking the time to understand what exactly is helpful is more important than trying to rush into something.”

President Panuelo agreed with Director Lawrence’s sentiments, emphasizing again that the U.S. is the Nation’s closest ally and that, by extension, the negotiations on the Compact should have a warm and cordial atmosphere.

His Excellency Robert A. Riley III, Ambassador of the United States to the FSM, noted that he’s trying to get Director Lawrence to join the annual Joint Committee Meeting between the FSM and the U.S., to be held sometime between January or February of 2020.

President Panuelo invited Director Lawrence to return as often as possible, noting that the more aware the U.S. interagency team is of the FSM not only an intellectual level, but on a visceral level too (e.g. by visiting Nan Madol, or diving in Chuuk Lagoon), that the Compact negotiations will necessarily proceed more smoothly.

The FSM is committed to extending peace, friendship, cooperation, and love in our common humanity to all nations and peoples, and has a special and enduring relationship with the United States codified through the Compact of Free Association. It is the hope of the FSM National Government that the negotiations on the expiring provisions of the Compact will begin and end sooner rather than later.

Citizens interested in learning more about the negotiations in their current state are encouraged to visit the website of the Joint Committee on Compact Review & Planning (JCRP) here: https://jcrp.gov.fm/

We have 241 guests and no members online