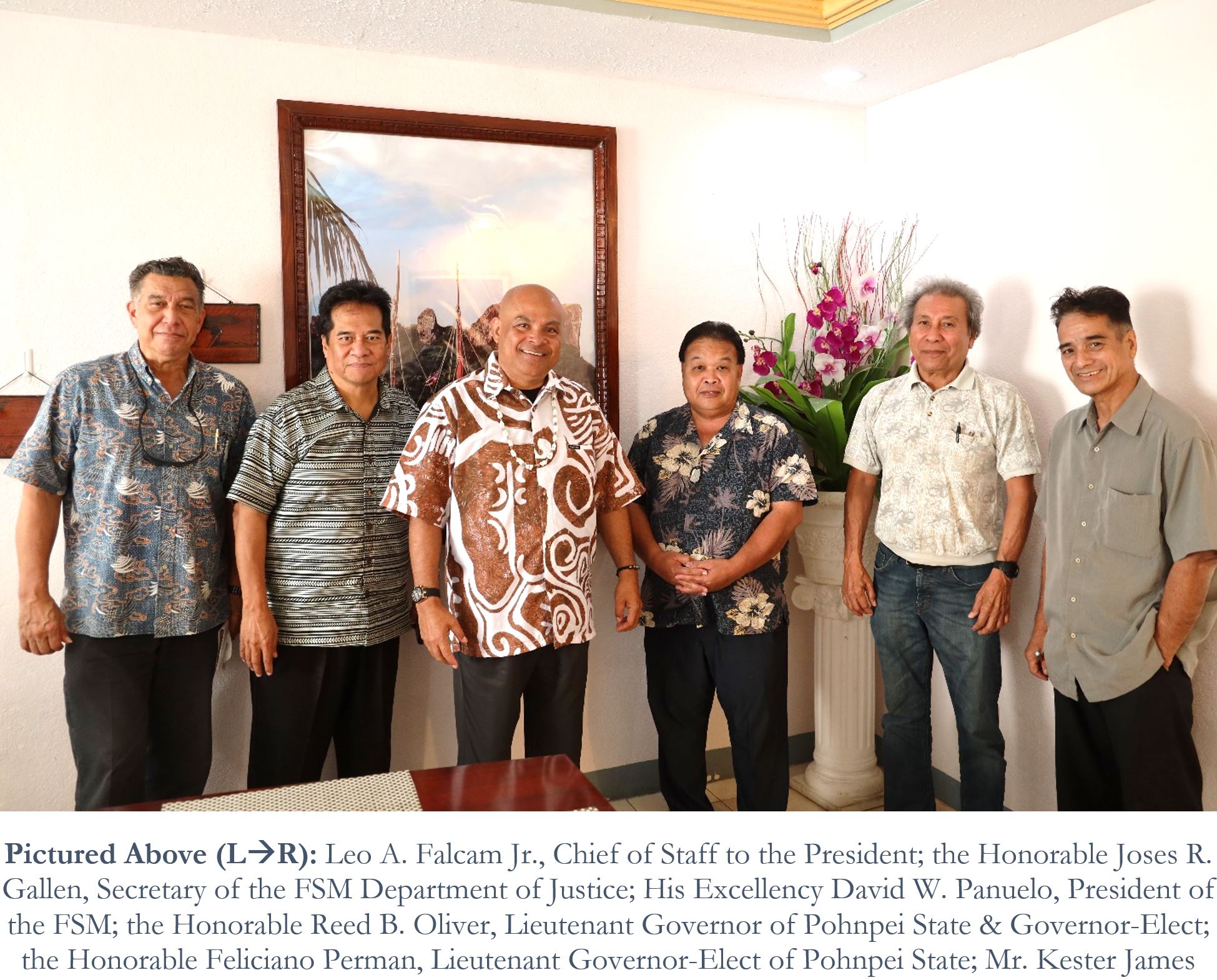 PALIKIR, Pohnpei—On January 9th, 2020, His Excellency David W. Panuelo—President of the Federated States of Micronesia (FSM)—met with the Honorable Reed B. Oliver, Lieutenant Governor and Governor-Elect of Pohnpei State, and the Honorable Feliciano Perman, Lieutenant Governor-Elect, in a meeting to discuss the upcoming Pohnpei State Government’s interest in National-State programming alignment, recommendations for an Honorary Consul of the FSM in the State of Israel, and the upcoming State & National Leadership Conference tentatively scheduled between April and May 2020. The Honorable Joses R. Gallen, Secretary of the FSM Department of Justice, also attended the meeting, whose primary outcome was the broad agreement that alignment of projects and programming—where possible—between the National and State Governments should be encouraged, with the specific idea of FSM National Police forces augmenting State Police forces in their execution of relevant duties, such as traffic citations.

“Mr. President,” Governor-Elect Oliver said, “I am hopeful that the FSM National Government and Pohnpei State Government can cooperate on the alignment of projects. As we move forward with our new Government, which will have its joint inauguration [on Monday January 13th, 2020], we will be sharing with you the things that we do and would also like to see what we can do with [The National] Government, together.”

“The more we talk, the better for our citizens,” President Panuelo said, who described how the FSM National Government—through the Nation’s bilateral relationship with the People’s Republic of China (China)—accepted ten million dollars of aid for improving the Pohnpei State Government Complex. “We signed six agreements in China, one of which is the renovation.”

Governor-Elect Oliver noted that the current plan is for Pohnpei State Government to vacate its current location, on the premise that upcoming renovations will including electrical and other work that require appropriate safety precautions, by making use of Government-housing near Pohnpei Island Central School. In addition, the Governor-Elect noted that he was hoping that China would not only renovate the building proper but its surrounds as well.

“We should upgrade our parking lot too, improve the landscaping, build an extension, and improve the complex’s energy efficiency—even solar panels would be great,” Governor-Elect Oliver said.

“I support your wishes,” President Panuelo said. “The sooner you can convey your input on additions, the sooner China can take them into account. We need to demand quality work. For example, the roof: the one we have now is asphalt, but tile roofing would really last and be durable.”

The conversation then segued to Governor-Elect Oliver’s keen desire to coordinate with the National Government to emphasize self-reliance through the development and reinforcement of character education. The Governor-Elect advised his keen desire for the return of the U.S. Peace Corps, as well as the implementation of an FSM version of the Boy Scouts of America program.

“We’re at a time where technology has really outpaced and moved forward. Kids are so smart at looking at tablets every day, but respect, responsibility, and honesty, are traits that risk being lost,” Governor-Elect Oliver said. “If we can bring Peace Corps back—and if we can bring Boy Scouts back, not just the U.S. [version] but have [Peace Corps] train us on it—it would go far in making us self-reliant. The building of the FSM States is parallel to the building of character…if we can improve on anything, it has to be with the people.”

“When I was in Fiji,” President Panuelo replied, referencing his former career at the FSM Department of Foreign Affairs, “There is a Ministry of Home Affairs—that’s how important it is. Fiji is so strong in local food, in [tradition], in culture, because the Government and the society at large have an investment in their people. Your administration should reflect this for the good of Pohnpei, and the National Government will help where it can.”

The conversation continued in the broad direction of how the National and State Governments can cooperate—with ideas such as the removal of unsightly waste (e.g. unattended junk vehicles) and the beautification of public areas. However, the actionable outcome occurred when the conversation discussed law enforcement; both President Panuelo and Governor-Elect Oliver agreed that National and State Police forces should cooperate closely on matters such as traffic and littering citations.

“Small stuff makes a big difference,” President Panuelo said. “Speed bumps at the appropriate community resident areas, enforcement of traffic citations. I sometimes feel that our National Police are underutilized—why not have the State Governments deputize them, with fines and fees going to the State but as a way to have the National Government Police forces more utilized? It would create visible cooperation between the National Government and the State Governments. People will feel it, and it can continue to spread as appropriate. We are all one Nation, after all.”

“When we take care of the small things, the bigger things take care of themselves,” Governor-Elect Oliver said. “It has to do with leadership. Yes, Mr. President, in the [Oliver-Perman Administration of Pohnpei State Government] the Director of Public Safety will be given that assignment. We’ll collaborate to tackle our traffic problems, and even our investigations of [violent crimes such as murders].”

The rest of the meeting discussed the State & National Leadership Conference, wherein the President’s Chief of Staff was asked if he could determine a suitable date in April or May for the Nation to come together, and Governor-Elect Oliver sharing with President Panuelo recommendations for Honorary Consuls of the FSM to the State of Israel.

The FSM National Government is committed to promoting peace, unity, and liberty across the Nation.