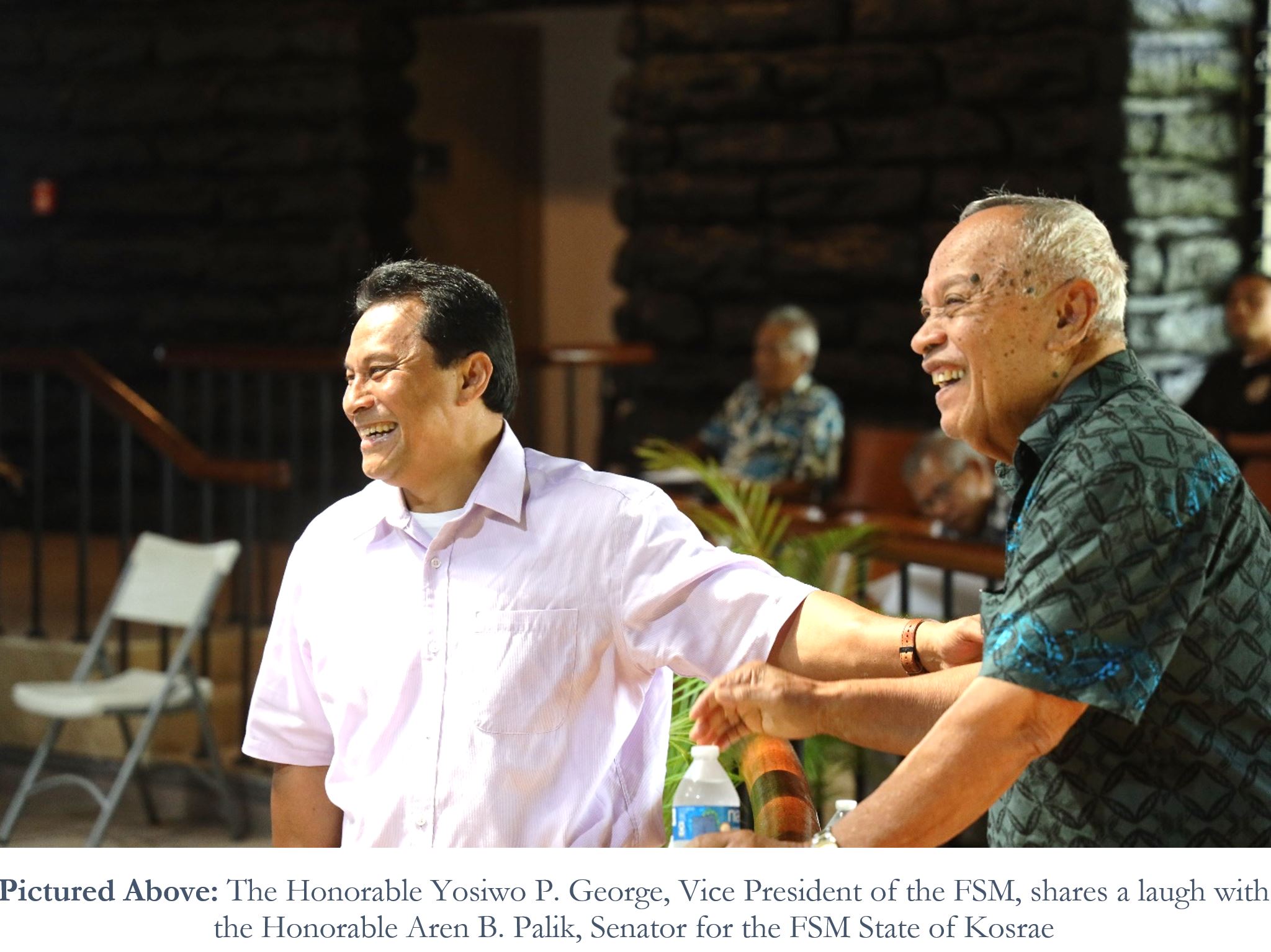 PALIKIR, Pohnpei— The 21st Congress of the Federated States of Micronesia (FSM) began its Fourth Special Session on March 5th, 2020. After the opening session, the Vice President of the FSM, the Honorable Yosiwo P. George, received the Committee to Wait, chaired by the Honorable Ferny S. Perman, with committee members the Honorable Joseph J. Urusemal, the Honorable Aren B. Palik, and the Honorable Paliknoa K. Welly, to discuss their agenda for this session of Congress. It was noted, both in a formal communication to His Excellency David W. Panuelo, President of the FSM, from the Honorable Wesley W. Simina, Speaker of the 21st FSM Congress, as well during the opening session itself, that the primary purpose of the Special Session is to review the economic impacts of the COVID-19 coronavirus on the Nation.

“We are here to listen to the Executive [Branch],” Senator Perman began. “One of the main purposes for this Special Session is to address what’s happening with the coronavirus.”

Senator Perman first noted that the 21st FSM Congress’ legal staff, having reviewed the President’s declaration and clarification/s, was uncertain if the U.S. Territory of Guam and the U.S. State of Hawaii were being treated as the rest of the United States (i.e. as a COVID-19 affected country, where travelers to the FSM originating from there are subject to a 14-day delay in a COVID-19 free country). It was requested that the Executive Branch be clearer in its communications.

“For all [COVID-19 related] intents and purposes,” said the Honorable Joses R. Gallen, Secretary of the Department of Justice, “…we are treating Guam and Honolulu as being [separate from] the U.S.”

The Executive Branch is aware of formal and informal communications from the hospitality industry regarding the impact of COVID-19-related travel restrictions on their financial wellbeing. To the knowledge of the President, Blue Lagoon Resort in Chuuk State has temporarily closed down, and Manta Ray Resort in Yap State has needed to layoff sixty (60) employees to remain financially solvent.

“The Executive [Branch] is aware of the negative impacts on the Nations economy,” Vice President George replied, followed by requesting Rob Solomon, Macroeconomic Advisor to the FSM, to describe in detail how the FSM is tackling the economic impacts.

“Surveys are going out to all the hotels and travel operators to establish where we’re at,” Mr. Solomon said. “One of the negative impacts will be a decline in tax revenue this year…tourism is about a twenty million dollar ($20,000,000) industry in the FSM, and that revenue is being spent on people who live here and work here.”

“So here’s what we’re doing,” Mr. Solomon continued. “We have to start fast-tracking public projects, priority projects, because from an Executive point of view we’ve got to stimulate the internal economy. …the President has asked [the Department of Finance & Administration] and [the Department of Transportation, Communication & Infrastructure] to get together and come up [with these plans]. The immediate thing we can do for the economy is move the projects and the things that we have on our books now, so that there will be a big push on public projects and infrastructure—especially the projects that local contractors can get involved in, so that it turns over money in the local economy.”

The Executive Branch also recommends that the FSM National Government look to increase FSM-based travel, i.e. to purposefully hold conferences, seminars, and workshops across the Nation instead of in Palikir, as a means of stimulating business.

“In the event that we have a surge of cases [of COVID-19 enter the FSM],” said the Honorable Dr. Livingston A. Taulung, Secretary of the Department of Health & Social Affairs, “at least while we’re looking toward a long-term solution, there are options that we can discuss such as stimulating hotels’ revenue by designating them as quarantine zones. Although we already have quarantine zones in the States, this is something to consider…the collective interest of the Nation is important to consider.”

“Small loans, or grants from the Government…tax relief on [quarterly business taxes]—all of those programs are certainly going to be needed, and I would hope that we can start seriously considering those—assuming that things will not be getting better [any time soon],” Senator Palik said. “I agree [with Senator Urusemal] that we will do a comprehensive assessment; some of the [economic] impact will be felt even after the travel ban is lifted.”

Mr. Solomon, speaking on behalf of the Department of Finance & Administration and its partnership with the Department of Resources & Development and the Department of Transportation, Communication, & Infrastructure, offered his thoughts on Senator Palik’s remarks. “Those are packages that we can try and look at…at the same time, we need to do what we can internally and quickly. …As for tax breaks, 50% of the [business tax income] goes right back to the FSM’s States, so we don’t want to strangle the State Governments either. Perhaps tax can be delayed…the President has asked the Task Force to work on the economic issues outside of the health issues.”

Senator Welly, having listened intently to the discussions, offered his view that it’s possible that Governments are reacting to the COVID-19 threat (as opposed to being responsive to it.) He correctly noted that the vast majority of the confirmed cases of COVID-19 result in minor symptoms, with most of the cases resulting in a full recovery. “You only see the bad things [in media], but they don’t tell you how many cases have been recovered. That’s my take—but I want to thank everybody for trying to help the Nation in addressing this issue,” Senator Welly said.

The remainder of the meeting focused on foreshadowing a 1:00pm hearing with the COVID-19 Task Force, i.e. that Congress would like to know how the presently appropriated funding has been used, the status of the FSM’s students in the People’s Republic of China (they’re healthy and being taken care of), the President’s request to reacquire authorization to access Disaster Assistance Emergency Fund (DAEF) resources, and to confirm or deny whether or not the Republic of Palau had acquired a case of COVID-19.

Following the Committee to Wait, the 21st FSM Congress held a hearing with the FSM’s COVID-19 Task Force and then—as the day was a Split Session—held session again at 3:00pm.