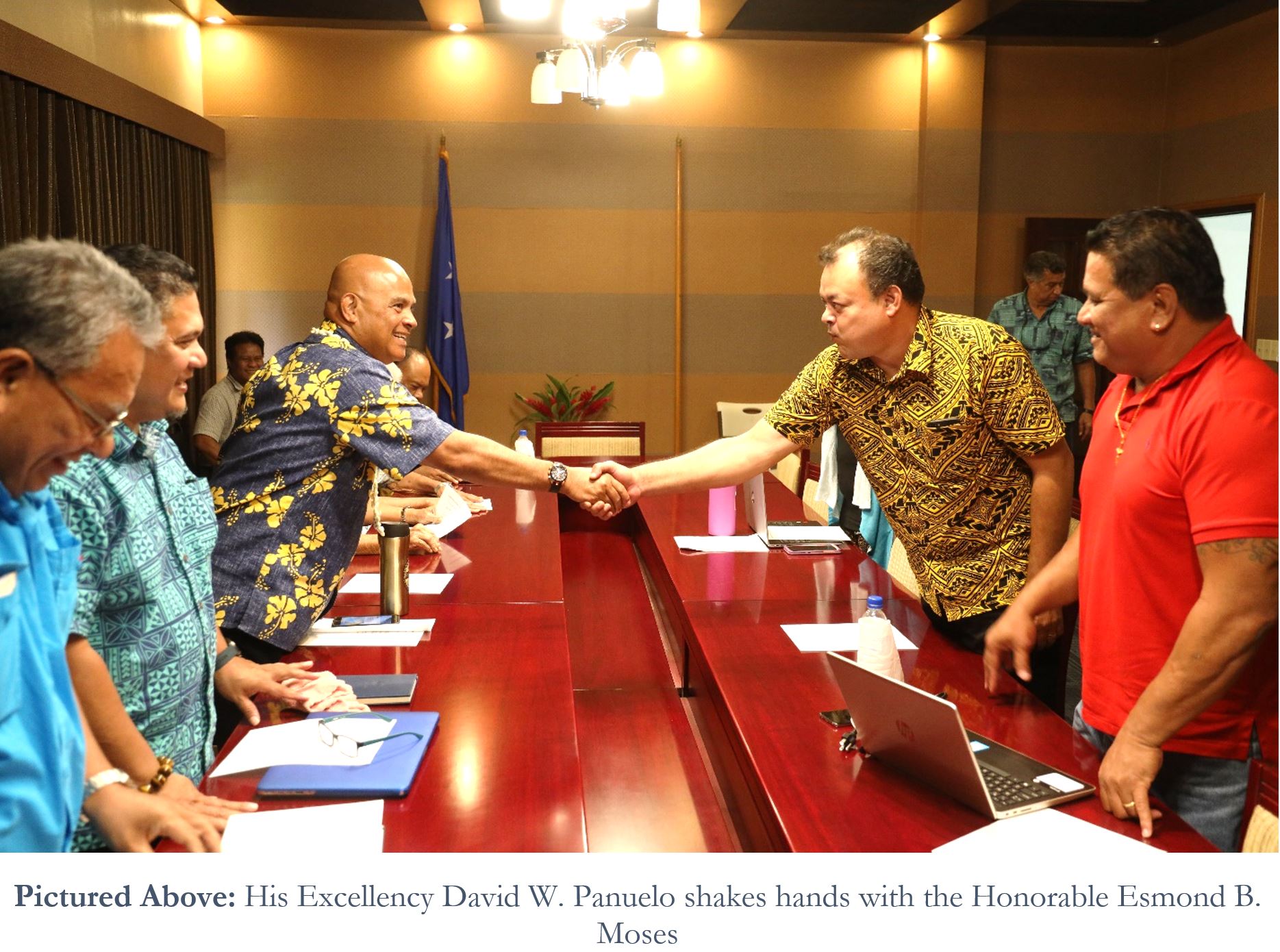 PALIKIR, Pohnpei—The 21st Congress of the Federated States of Micronesia (FSM) began its Fourth Regular Session on May 11th, 2020. After the opening session, His Excellency David W. Panuelo and the Honorable Yosiwo P. George received the Committee to Wait, chaired by the Honorable Esmond B. Moses with committee member the Honorable Ferny S. Perman, to discuss their agenda for this session of Congress.

The bulk of the opening discussion focused on the Economic Stimulus Package. President Panuelo gave his appreciation to Congress for their enthusiastic support thus far, and noted that on May 13th the first checks—amounting to approximately half a million dollars ($500,000) in relief—will be sent to affected businesses in the tourism sector. The President further noted that the Pandemic Unemployment Assistance program will take effect in the coming weeks, and that it will be open to all individuals who have lost their jobs—or their hours—due to the COVID-19 Pandemic.

Amongst these discussions, the President and Vice President solicited Congress’ support towards opening up the Economic Stimulus Package to other sectors of the FSM’s economy via some proposed legislation intended to allow this functionality. Senator Moses indicated that Congress would be happy to review any proposed legislation as it is Congress’ intent to ensure all sectors of the Nation, not only the tourism sector, are able to endure during these unprecedented times.

The conversation then segued to updates on how the Nation is tackling COVID-19. “All of the hospitals have already received their COVID-19 testing machines,” the Honorable Livingston A. Taulung, Secretary of the Department of Health & Social Affairs, said. “They have both ABBOT-ID machines as well as the GeneXpert machines. Chuuk has 900-some tests, Pohnpei in excess of 600-some, and I believe about 400 or so each for Yap and Kosrae.”

“I met with [the Honorable Reed B. Oliver, Governor of the FSM State of Pohnpei] this weekend,” President Panuelo said, “He has agreed to align Pohnpei with the National Government to ensure that essential personnel in interstate travel are medically screened but not quarantined for fourteen (14) days. This will allow ease-of-use in the distribution of medical supplies and personnel to our sister States through our air and sea vessels.”

The President noted that he enjoys weekly meetings with the Governors, and that they have an interest in ensuring a unified approach that is respectful of each individual State’s wishes. “In Chuuk, for example,” President Panuelo said, “The Governor has requested that all individuals whose final destination is in the Mortlocks or the Northwest Islands first visit Weno for medical screening. We are cooperating on this issue.”

Another subject of much discussion was with regards to various nominations for the Nation’s Supreme Court and some of its Boards, including the FSM Insurance Board and the FSM Telecommunications Corporation’s Board. The President described his views on who he believes may be most suited to fill these roles, and that he looks forward to Congress’ appropriate action in future.

The meeting ended on a positive note, with President Panuelo and the Committee to Wait discussing May 20th, 2020 as a possible date for the President to give his annual State of the Nation address.

We have 526 guests and no members online