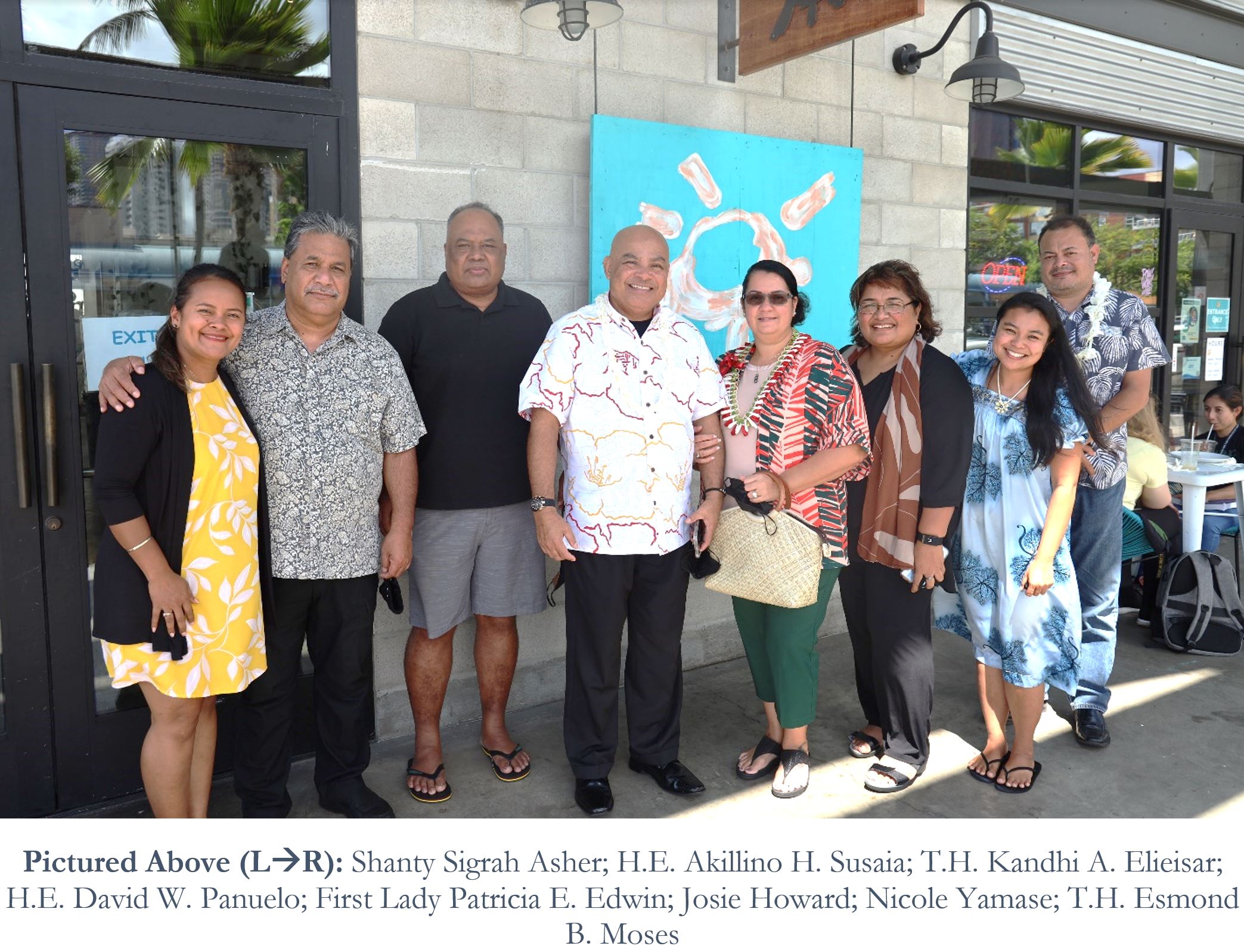 HONOLULU, Hawaii—On July 20th, 2021, His Excellency David W. Panuelo—President of the Federated States of Micronesia (FSM)—received three of the Nation’s outstanding achievers in the areas of human rights, citizens advocacy, education, and science: Nicole Yamase, one of the recipients of the Bill Raynor Micronesia Challenge (BRMC) scholarships implemented by Micronesia Conservation Trust, and a PhD Candidate at the University of Hawaii at Manoa; Shanty Sigrah Asher, Member of the State of Hawaii’s Board of Education and Pacific Islander Liaison Officer at the Office of Economic Revitalization for the City and County of Honolulu; and Josie Howard, Program Director for We Are Oceania, a registered nonprofit whose mission is to empower the Micronesian community in Hawaii to navigate success while honoring the integrity of our diverse Micronesian heritage.

Program Director Howard updated President Panuelo on the programming and activities We Are Oceania have been implementing over the course of the COVID-19 Pandemic, such as helping Pacific Islanders get protected against the virus through completing the vaccination regime. Program Director Howard noted, that in Hawaii, Pacific Islanders as a broader category, and Micronesians as a specific subcategory, have been disproportionately represented in the number of historical, and contemporaneous, confirmed cases of COVID-19. The Program Director remarked that beyond cultural affinity towards communal gatherings and large groups, significant linkages included systemic poverty, language and educational barriers, and difficulty in accessing necessary services.

“I deeply appreciate the work that you and We Are Oceania are doing, Josie [Howard], to empower Micronesians who call Hawaii home to navigate foreign cultures and laws,” President Panuelo said. “From multiple perspectives, whether it’s to build citizens’ morale and faith in your organization by witnessing the trust and confidence we have in you, or to demonstrate that trust and confidence in the form of financial support, I would like to inform you that I’ve included in our supplemental budget request at the 1st Special Session of the 22nd FSM Congress an ask for $50,000 to support We Are Oceania, as well as another $50,000 to support the FSM Association of Guam. I’m here with the [Honorable Esmond B. Moses] Vice Speaker, so let’s be sure to lobby him for Congress’ support so we can show our appreciation to you.”

The Board of Education Member and City and County of Honolulu’s Pacific Islander Liaison Officer, Shanty Sigrah Asher, updated President Panuelo on a host of positive programs and outcomes, as well as areas of weakness that the FSM National Government can support. Asher spoke at length about troubling, but accurate and entirely real, circumstances many migrants, especially youth, find themselves in when they move to Hawaii, and the economic, familial, communal, and cultural impacts of what it looks like. Asher noted, for example, that Hawaii’s lockdowns—while positive from a public health perspective—meant in practice that many Micronesian youth were effectively divorced from the education system, as virtual classes became difficult to access if a family didn’t have an internet connection. Asher further described recent successes, such as the “Jungle Basketball Summer Tournament”, which united Micronesian youth regardless of their home island or socio-economic status, and was made possible by the kind collaborative assistance from Kaimuki High School, Principal Jaime Dela Cruz and Gym Director Fred Lee and staff, the City & County of Honolulu Office of Economic Revitalization, Kuldip Productions Inc., Soused Production, Micronesian Health Advisory Coalition (MHAC), Pacific Voices, Safe Haven, the Consulate of the Republic of the Marshall Islands, the Marshallese Organization of Hawaii, Pacific Islander Contact Tracers, the Hawaii State Department of Health, Team Faichuuk, and Jayex Garage. Asher requested President Panuelo’s assistance in understanding how underserved persons and communities might be able to gain support from the FSM National Government, noting that many helpful organizations—such as Pacific Voices, Safe Haven, and the Micronesian Ministers Uut—may not be formally chartered but do provide a genuine service to FSM citizens residing in Hawaii.

“I will have our Secretary of Foreign Affairs through our Ambassador to the United States designate at least one Foreign Service Officer in Guam, Hawaii, and Portland to be dedicated to migrants’ affairs,” President Panuelo said. “In the meantime, since I am hearing that there are non-chartered organizations that are providing genuine services to our citizens, I would ask that you work with them and our Consulate to make them chartered and recognized by the U.S. as legitimate nonprofits. Aside from making it easier to obtain assistance from the U.S. Government and the State of Hawaii, it’s the mechanism that’s needed for me, in my capacity as President of the FSM, to submit a request to the Congress for providing funding to the organization.”

Back on March 11th, 2021, PhD Candidate Nicole Yamase became the first Pacific Islander, and the youngest woman, to travel to the deepest part of the World’s oceans: the Challenger Deep. The Challenger Deep, part of the Marianas Trench, is 35,856 ft (10,929 m) below sea level. Nicole Yamase is one of only approximately two dozen people to ever descend to the deepest part of the ocean and, as the Challenger Deep is located within the territory of the FSM, she is the first FSM citizen to visit this unique environment of her country. As an outcome of the March 31st, 2021 Talk Story event with Nicole Yamase, President Panuelo requested that she work with Yolanda Joab Mori and Blue Prosperity Micronesia to see how the Challenger Deep—which is located in the FSM—might indigenize its name to something more fitting for its place in Micronesia.

Nicole Yamase updated President Panuelo on her scientific studies on algae, and her efforts to ensure that the process for changing the Challenger Deep’s name is inclusive and respectful of all stakeholders. President Panuelo asked if she can be sure, in her collaborative efforts with Yolanda Joab Mori and Blue Prosperity Micronesia, to ensure that Micronesia’s youth are involved in the naming process.

“A critic of our efforts to decolonize and indigenize the name ‘Challenger Deep’ would say that the original discoverers on Her Majesty’s Ship Challenger found something new, and so had the right to give it a name,” President Panuelo said. “But the name does not fit the place, which is in Micronesia, whether one refers to the FSM specifically or even the broader Micronesian subregion, and it is the right of the owner to give it its name.”

We have 341 guests and no members online