President Panuelo Tours Every School in Kosrae State, & Answers Foreign & Domestic Policy Questions, Ranging from the Impacts of AUKUS to the FSM & COVID-19’s Affect on Education, and from Compact Negotiations to the WICHE Program 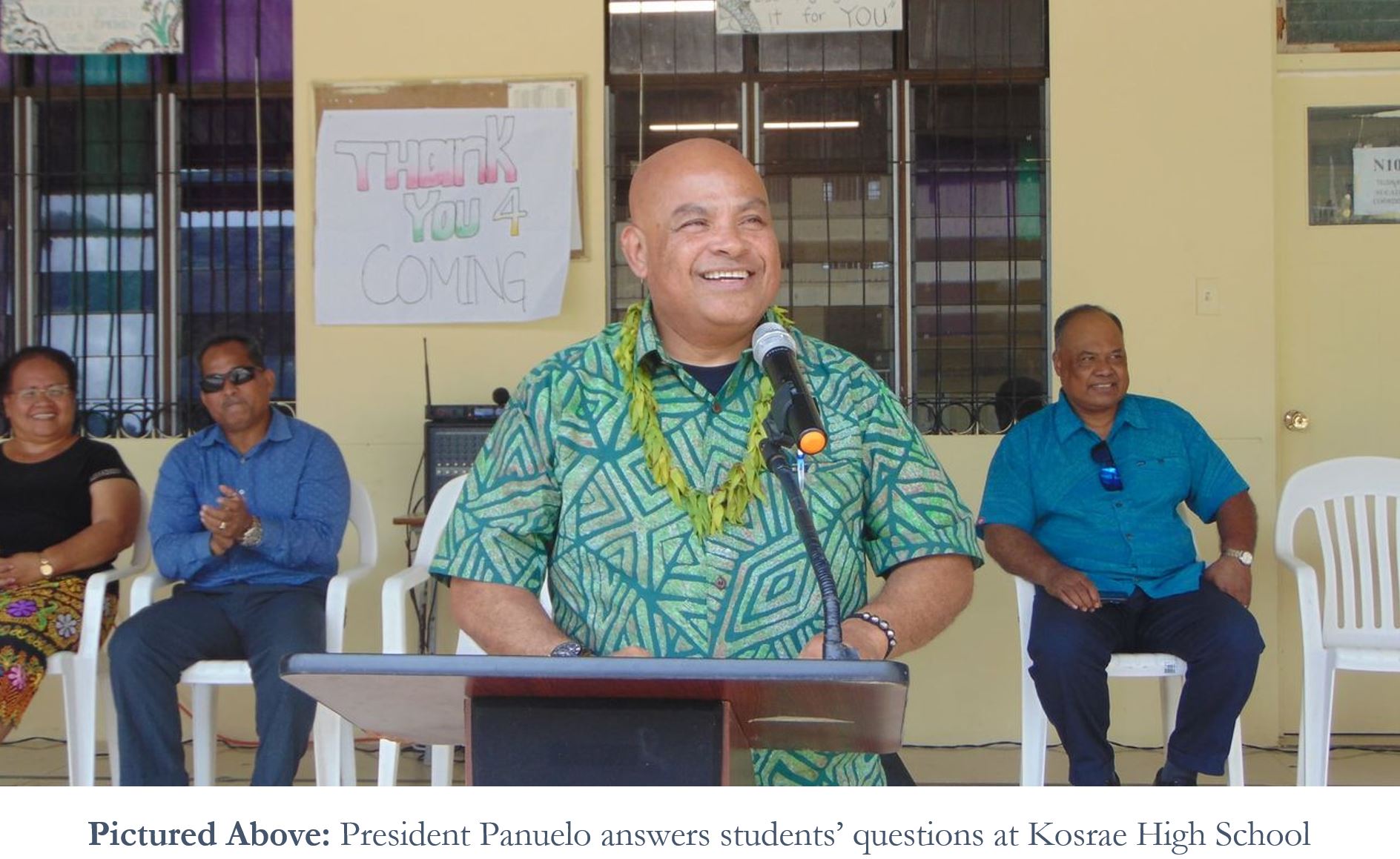 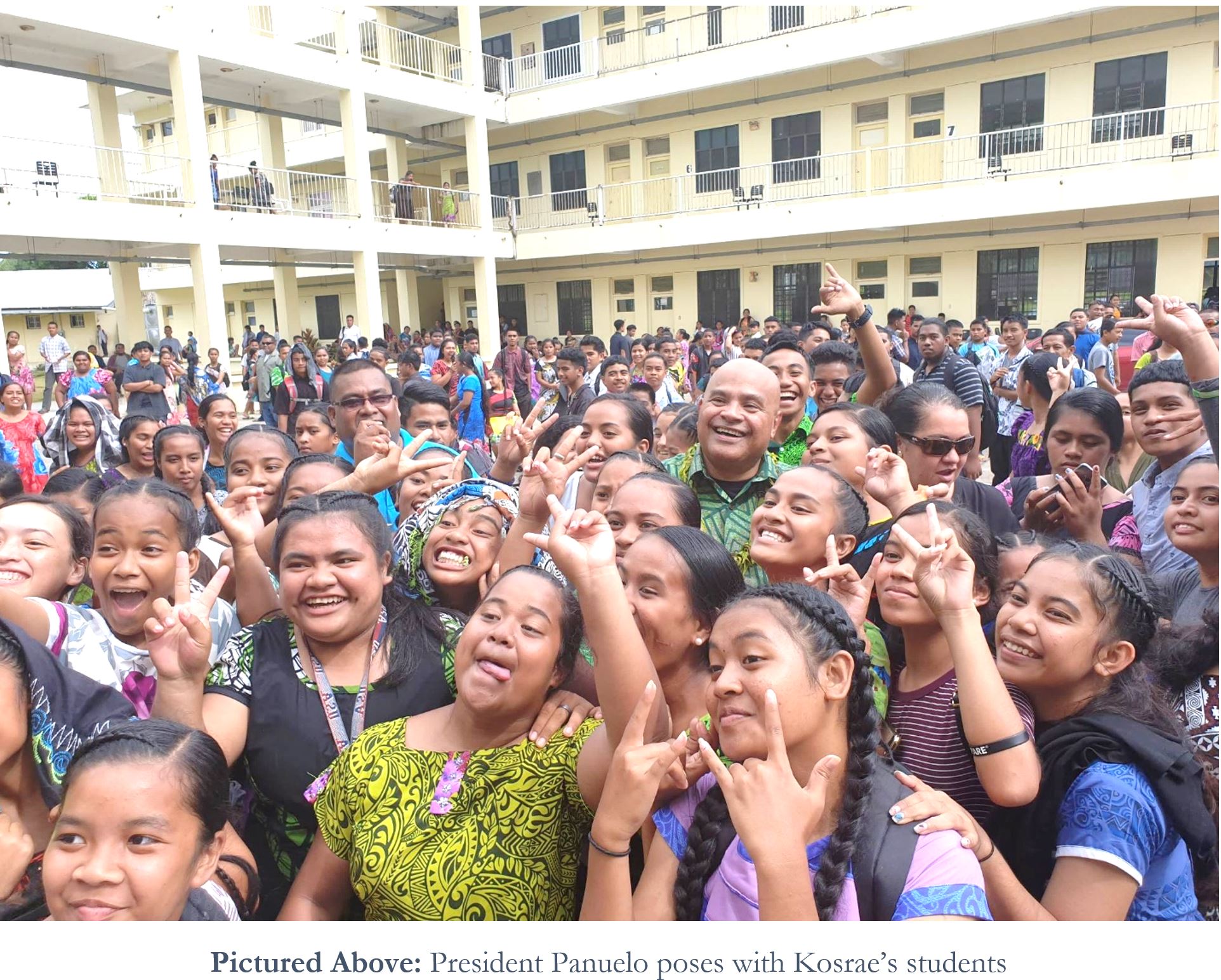 President Panuelo Tours Every School in Kosrae State, & Answers Foreign & Domestic Policy Questions, Ranging from the Impacts of AUKUS to the FSM & COVID-19’s Affect on Education, and from Compact Negotiations to the WICHE Program

TOFOL, Kosrae—During the Presidential Visit to the Island of the Sleeping Lady, His Excellency David W. Panuelo and First Lady Patricia E. Edwin made it a point to tour every school in the State of Kosrae, Federated States of Micronesia (FSM). Accompanied by his Cabinet and the United Nations Children’s Fund (UNICEF) Chief in the FSM, Mr. Cromwell Bacareza, President Panuelo made it a point to answer any question posed to him. This release intends to summarize the questions and answers that would be of most visible and immediate concern to FSM citizens, both to those residing in the State of Kosrae and across the Nation.

One student asked “We all understand the Compact of Free Association situation we are in now, with the ongoing negotiations. How are the negotiations going, and how can this affect our college education in the future, especially going to college in the United States?”

President Panuelo responded by saying “As of now, the negotiations are ongoing. If the big question is ‘Will the expiring economic provisions of the Compact continue?’, the answer is yes; what we are trying to negotiate are the details. For example, and for budgetary purposes, right now any given school in the FSM, including yours, receives funding through both the Education Sector Grant, which is from the Compact itself, and the Supplemental Education Grant, which is an act of the U.S. Congress. We have had internal discussions on the merits of simply combining both of these into one, but we have not necessarily relayed this information or any other specific information to the U.S. side. While the details I can share on the negotiations are limited, as they are ongoing, rest assured that the Joint Committee on Compact Review & Planning is working hard to represent you and your interests. Have faith in them, because they are Chaired by my good friend Asterio Takesy, the former Micronesian Ambassador to the United States, and the Chief Negotiator is my own Chief of Staff, Leo A. Falcam Jr.”

“Regarding going to college in the United States,” President Panuelo continued, “Certain programs like the PELL Grant remain enduring, regardless of the negotiations being completed by 2023 or not. Each and every one of you who choose to become educated in the United States, like how I was educated at Eastern Oregon University, absolutely WILL have the opportunity to do so. The issue of the negotiations on the Compact of Free Association is not about whether the FSM and the United States are wondering if we’re still enduring partners, as we obviously are. The United States is our first and foremost ally, and our closest partner bar none. That is not changing, and you should have absolutely no worries about your future in this area.”

One student asked “If there is a case of COVID-19 in the FSM, how will the Government respond in regards to our Education System? What will happen to us? Can we still go to school?”

“Being mindful that we have implemented ten days of pre-quarantine in Guam, and most FSM States have a minimum of seven days of in-country quarantine, although some go beyond that to fourteen days, in the event of widespread COVID-19 in the community, rest assured that your Government has plans in case this happens. As you’ve likely seen in the news in other countries, in-person classroom teaching might first require the use of masks and mandatory handwashing between classes, though the Government is also exploring remote learning in the event it becomes necessary. If we all continue to take the COVID-19 vaccine, however, this will not be a major concern.”

One student asked “I have heard of a recent new pact called AUKUS meaning Australia, United Kingdom, United States, that means there will be nuclear submarines in the Pacific. There is rumor of the Chinese Government going to war with Taiwan and to try to conquer the Pacific region and send the United States away. What is your take on this issue and how will the Nation react?”

President Panuelo responded by saying “The FSM is firmly part of the U.S. defense umbrella and, through the Compact of Free Association, is considered as part of the homeland. Further, the AUKUS treaty, although a surprise to us, is not really new news in many ways. The United States, Australia, the United Kingdom, Canada, and New Zealand already cooperate to protect the Indo-Pacific through their Five Eyes information-sharing programming, and the FSM specifically has security ties not only with the United States but also with Australia and Japan.  The AUKUS treaty makes the FSM, the Pacific, and really the whole of the Indo-Pacific Region safer.”

“On the word ‘nuclear’,” President Panuelo continued, “Prime Minister Scott Morrison [of Australia] explained in a letter to me that Australia does not intend to use nuclear weapons. Rather, they intend to use submarines that are nuclear-powered, as opposed to being diesel-powered. Australia is not going to break the Treaty of Rarotonga or any other nuclear non-proliferation treaty. So the effect of nuclear-powered submarines is that this makes their new submarines able to go deeper into the ocean and for longer periods of time. This means that an Australian submarine that is helping the FSM tackle illegal fishing is more likely to be able to track and identify its target safely. I have been briefed that there is very little safety risk, and it is worth noting that both the United States and China already use nuclear-powered submarines themselves because submarines that are nuclear-powered are more sustainable, like how solar panels on your school make your school more sustainable. That said, certainly it is my intention to ask Australia and the United States for an in-depth briefing on the more precise and sensitive details.”

“Regarding your concerns about a future war over China’s Taiwan Province: the FSM has an Enduring Partnership with the United States of America, but we also have a Great Friendship with the People’s Republic of China, like we have a Kizuna with Japan, and strong cooperative bonds with Australia. We extend to every country peace, friendship, cooperation, and love in our common humanity. I have asked both the United States and China to work together with each other, both on tackling existential crises like Climate Change, and also for the common benefit of humankind. I have personally met either the current or former leaders of the United States, Japan, China, and Australia, and something I can tell you is that every single one of them wants to get along. Where geopolitics becomes an interesting challenge is in how other parties interpret your actions. No one has told me this, but you can imagine that if you are part of Australia’s leadership, and you see the United States has nuclear-powered submarines, and China has nuclear-powered submarines, and France has nuclear-powered submarines, and you have a giant ocean territory to protect, and a commitment to protect Pacific Islands, and a regional commitment to Indo-Pacific security, you would want nuclear-powered submarines, too. Similarly, if you are part of China’s leadership, and you see Australia is getting bigger weapons because it’s scared of you, even though you’re Australia’s biggest trading partner, you are likely to feel very hurt and offended. No country in this scenario is a ‘good guy’ or ‘bad guy’, but every country wants what they think is best for their citizens. The FSM agrees. All of which is a long way of saying that nobody wants war, and while our country, the FSM, is not a big economy, we do have a big voice, and we are using our voice to tell our friends—which is every country in the world—to show peace, friendship, love, and cooperation with each other. Like how an ounce of prevention is worth a pound of cure, our entire foreign policy is premised on the idea that all people are either already friends or friends in the making, because people who love each other and work together see no reason to hurt each other.”

One student asked “I keep hearing about a program called WICHE and so I want to ask how can we [high school seniors] apply?”

President Panuelo responded by saying “The FSM has recently joined the Western Interstate Commission on Higher Education or WICHE, which will help FSM citizens applying for schools under the WICHE umbrella to qualify for reduced tuition, at a rate of no more than 150% of instate tuition. At my alma mater, Eastern Oregon University, I am told that the non-resident tuition is $34,384 per year, and the resident tuition is $21,424 per year. So we can see that the difference, the savings difference, for students under the WICHE umbrella, they will be saving significant amounts of money. For students trying to get their undergraduate or Bachelors degree, you would want to work with your counselor at Kosrae High School, or the Kosrae Department of Education, to ensure that the school you’re looking at in the United States is a WICHE member. You don’t have to apply to WICHE itself—you just apply directly to the school you want to go to. In your application, you should indicate that you are seeking the WICHE Western Undergraduate Exchange in your application.”

FSM citizens interested in learning more about how they can benefit from WICHE may wish to consult this link: https://www.wiche.edu/tuition-savings/wue/for-students/

We have 125 guests and no members online