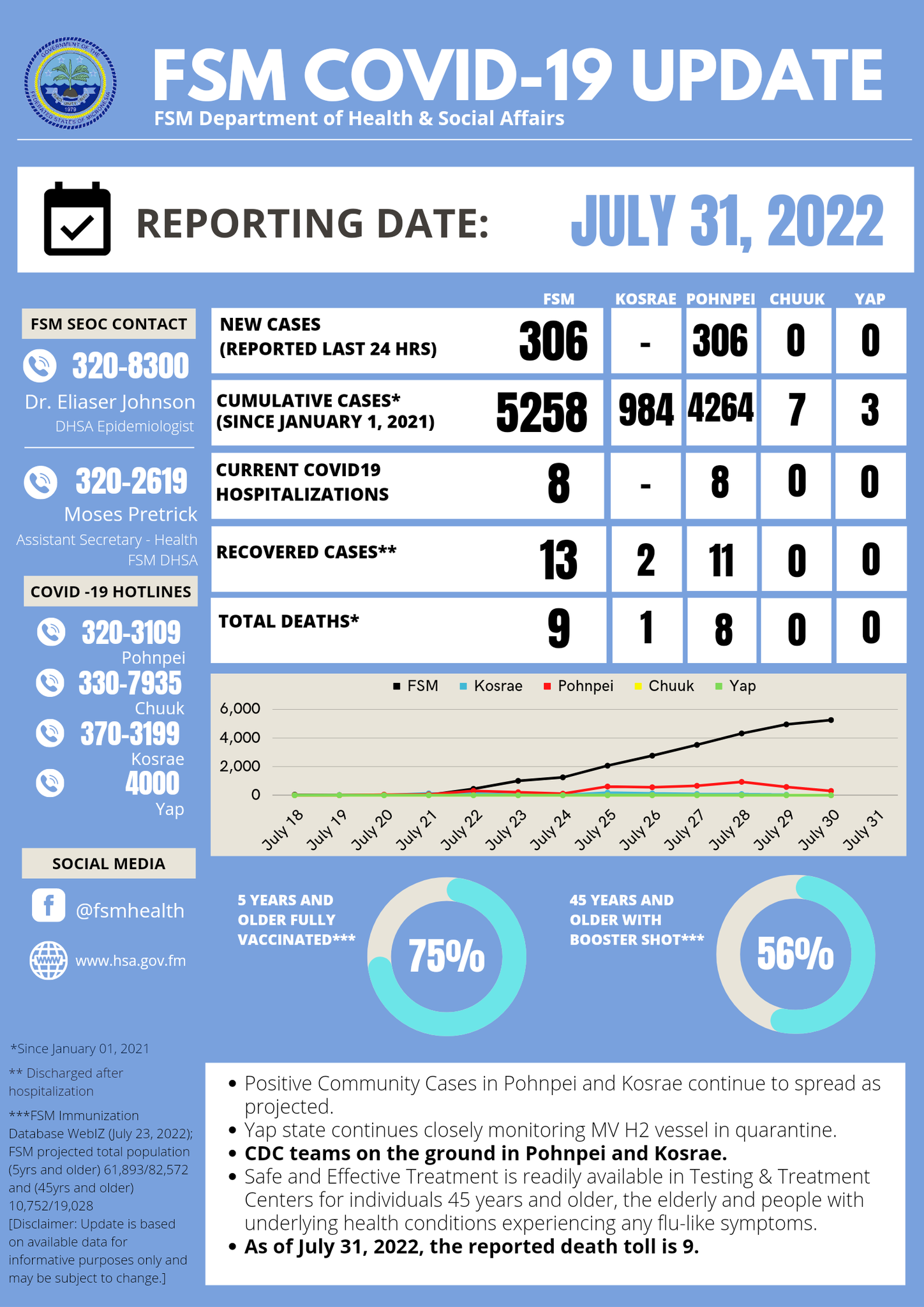 Notes from mass distribution email below

Attached is the COVID-19 update report for July 31st, 2022. Please disseminate where appropriate and in local language when possible.

For this update, I have numbered the different topics discussed to assist in readability. I have also bolded what I believe are key ideas, with the intent that it will make the updates easier to scan through. Please feel encouraged to advise if this format is preferable, or not, to previous daily reporting methods. At the conclusion of the updates, I am including the same notes as before on how to read the FSM COVID-19 SitRep.

At the same time President Panuelo was meeting with his cabinet, the Chuuk State COVID-19 Task Force was meeting in preparation for August 1st, 2022, and in anticipation of a response from President Panuelo. After the conclusion of President Panuelo's meeting with his cabinet, the Secretary of Justice and the Secretary of Health & Social Affairs met with the Governor of Chuuk State, Alexander R. Narruhn, to discuss the President's intended course of action moving forward. While appreciative of President Panuelo's keenness to accommodate Chuuk State's request, Governor Narruhn described that Chuuk State will require 14 days of quarantine for incoming passengers, so as to attempt to ensure that Chuuk remains COVID-19 free until November 1st, 2022. This is consistent with a Joint Resolution passed by Chuuk State's Legislative Branch (by both its House of Senate and its House of Representatives) on July 30th, 2022, which declared a State of Emergency.
Following the meeting between Governor Alexander R. Narruhn, the FSM Secretary of Justice, and the FSM Secretary of Health & Social Affairs, Chuuk State Government relayed a communication to President David W. Panuelo requesting that Chuuk be allowed to accept flights on August 1st (for 23 confirmed passengers from Guam); on August 2nd (for 3 confirmed passengers from Hawaii and 25 from Pohnpei State); on August 4th (for 58 passengers from Pohnpei State); and on August 22nd (whose number of passengers would be communicated at a later date and time).
After receiving the letter from Governor Alexander R. Narruhn and digesting its contents, President David W. Panuelo held another meeting with his cabinet from approximately 8:35pm to 9:50pm Guam Time. The purpose of the meeting was to review proposed communications to international commercial carriers regarding the opening of borders on August 1st, as well to review the requested flight dates from Governor Narruhn. After much thoughtful dialectic, President Panuelo determined that the FSM Government will accept Chuuk State's request to implement 14 days of quarantine for incoming persons; that the FSM Government will accept Chuuk State's requested dates for flights in August; and that the FSM Government will accept Chuuk State's requested number of passengers, with the exception of August 1st and August 2nd. In the event there are more than 23 passengers for August 1st originating in Guam, and in the event there are more than 3 passengers for August 2nd originating in Hawaii, the FSM Government will allow all persons scheduled to travel to Chuuk to disembark there.
Following this series of meetings and communications, the ultimate agreement between the FSM Government and Chuuk State Government regarding Chuuk State's request is that all persons currently destined for Chuuk State on August 1st and August 2nd will be allowed to disembark there. The FSM Government accepts Chuuk State's request for flights to occur on August 1st, 2nd, 4th, and 22nd, and not additional dates this month. Persons traveling to Chuuk can expect to be subjected to state-mandated quarantine for a period of up to 14 days. The FSM Government and Chuuk State Government are working to prepare a formal joint release on this issue, complete with quotations attributable to President David W. Panuelo and Governor Alexander R. Narruhn.

I have been provided a Chuukese translation of the above from Chuuk State's PRO, which is included below.

This concludes the updates for tonight. There will be additional updates tomorrow evening.
Notes on reading the FSM SitRep:

First--the cases from Chuuk and Yap are reflective of previous repatriation flights. All of those cases were border cases, found and isolated in quarantine. Both Yap and Chuuk remain COVID-19 free in their communities.

Second--the term "hospitalization" in the attached report means "a person is positive for COVID-19 and is presently under medical care at a state or private hospital." This is the census number for all individuals in the hospital.

Third--the term "recovered" in the attached report means "a person who WAS under medical care at a state or private hospital is no longer positive for COVID-19 and has left the hospital's care." This is a cumulative number.

We have 1144 guests and no members online