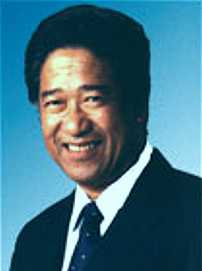 Tosiwo Nakayama of Onoun(formerly known as Ulul), Chuuk, was born on November 23, 1931 on Piherarh Island in Namonwito Atoll.  He attended Truk Intermediate School in 1948-1949 and the Pacific Islands Central School in 1951-1953.  In 1955 he was awarded a Trust Territory scholarship which enabled him to study first at the University High School and then for two years at the University of Hawaii.  Upon his return from Hawaii to Chuuk (formerly known as Truk) in 1958, he became Principal Clerk, Supervisor of Adult Education, and subsequently, was appointed Political and Economic Advisor to the District Administrator.  In 1964 he was appointed to the position of Assistant District Administrator for Public Affairs, Truk District then. Nakayama spent a life-time of public service in various prominent positions and roles during the United States’ Administration of the UN Trust of the Pacific Islands. These positions and responsibilities included key roles in the Congress of Micronesia and the interim Congress of the Federated States of Micronesia.  Nakayama served in the Truk District Legislature as a member from Onoun and was elected President in 1960-1961.  In June of 1961, Nakayama served as Micronesian Advisor to the United States Delegation to the United Nations Trusteeship Council.  He was elected to the Council of Micronesia in 1962 and 1963.   On September 10, 1963, he married to Miter Haruo in Chuuk. In January 1965 he was elected to the House of Delegates of the Congress of Micronesia.  At the House of Delegates’ organizational meeting he was elected its President.  Nakayama was re-elected to the Senate in 1968 while on leave of absence from his job as Assistant District Administrator for Public Affairs for Truk District to continue degree work at the University of Hawaii. He was a member of the Truk District Scholarship Committee, the Truk Review Advisory Board, the Truk District Recreational Committee, the Truk Board of Education, as well as many other boards and committees.  Nakayama was elected to the Congress of Micronesia in 1965 and served as its Senate President in every term except one, until the Congress of Micronesia was replaced by the FSM Constitutional government in 1979.  He also served as president of the 1975 Micronesian Constitutional Convention where he demonstrated leadership and statesmanship that contributed a great deal to the framing of the constitution of the Federated States of Micronesia. In May 1979, the members of the Congress of the Federated States of Micronesia, acting for the first time under the constitution of the FSM, unanimously elected Nakayama the nation’s first President , and re-elected him for a second term, which ended in 1987.  Thus far, Nakayama is the only FSM president that has served two terms. In October of 1987, he took a position with the Bank of Guam, Chuuk Branch, as the Vice President for Governmental Affairs, a position he held until December of 2003. Nakayama’s leadership, profound humility, commitment and guidance during the nation’s early efforts towards self-government earned him the respect of his colleagues, the people of the Federated States of Micronesia, and the international community. He is one of the nation’s highly revered and deeply respected Founding Fathers. A very keen fisherman with an equally keen sense of humor, President Nakayama was married to the late Miter Haruo of Weno, Chuuk and is survived by his ten children and numerous grandchildren. He was 75 when he passed away at the Hawaii Medical Center West in Honolulu on March 29, 2007.

We have 1303 guests and one member online