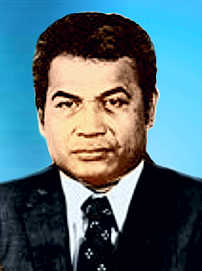 Petrus Tun, the first Vice President of the Federated States of Micronesia, was born on March 19, 1936.  He received a BA Degree in Zoology from the University of Hawaii where he also completed a year in post-graduate studies specializing in teaching science at the secondary school level.

After his four year term as Vice President, Tun worked as an advisor to Governor John Mangefel of Yap State from 1983-87, and then in 1987, he was elected as the second Governor of Yap for two terms, until 1991. After his two terms as Governor, he was hired as a Special Consultant to the Governor, under then Governor Vincent Figir, a role he held until his passing in 1999.  During his service as a Consultant to Governor Figir, he was also appointed as Yap State’s representative to the Compact II negotiating team and served as Chairman of the Joint Committee Meeting between the U.S. and the FSM.

We have 1498 guests and one member online