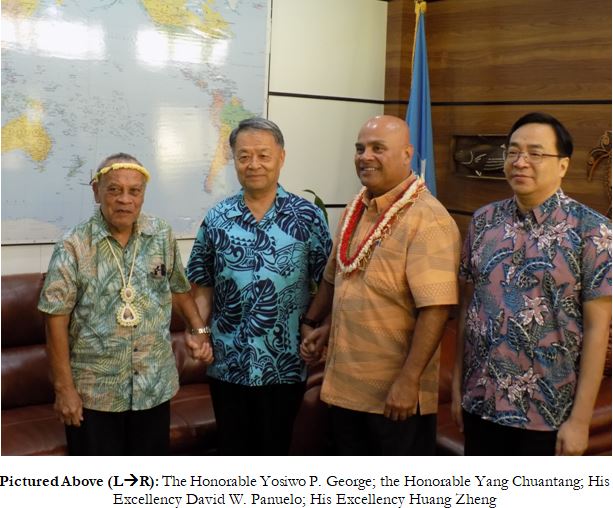 PALIKIR, Pohnpei—On July 29th 2019 His Excellency David W. Panuelo, President of the Federated States of Micronesia (FSM), received the Honorable Yang Chuantang, Special Envoy of His Excellency Xi Jinping—President of the People’s Republic of China—in a courtesy call. Special Envoy Yang, also the Vice Chairman of the Chinese People’s Political Consultative Conference, was visiting the FSM to attend the Joint National Inauguration Ceremony. As a show of friendship between the FSM and China, which will celebrate 30 years of diplomatic relations on September 11th 2019, Special Envoy Yang gifted, on behalf of the people and Government of China, a two million dollar donation to the Nation’s sovereign FSM Trust Fund.

“Our bilateral relationship is very strong,” President Panuelo began. “China is doing a lot of infrastructure projects, and we thank you for them,” the President said, referencing the gymnasium at the College of Micronesia-FSM, the Chuuk State Government Complex, and the roads and bridges in Pohnpei’s municipalities of Madolenihmw and Nett.

“China is ready to work with the FSM to…strengthen our cooperation…and push for more growth for our strategic relationship,” Special Envoy Yang said. “I worked for 30 years in construction development and enterprise…[I] hope that our two sides can jointly implement projects together.” Special Envoy Yang expressed his enthusiasm at the development of the Convention Center scheduled to be developed in Palikir, immediately across from the Palikir Capitol Complex.

Special Envoy Yang noted that the cash grant to the Nation’s sovereign FSM Trust Fund was unique, as China typically supports its partners through infrastructure projects. “We [recognize]...the importance you place on the FSM Trust Fund and its importance to the country.”

“Once again, congratulations on your inauguration…I think your message will echo in the hearts of the FSM,” Special Envoy Yang continued.

The FSM National Government extends its appreciation to Special Envoy Yang, and the people and Government of China, for their interest and attendance at the Joint National Inauguration Ceremony. The FSM is committed to extending to other nations what it seeks from each: peace, friendship, cooperation, and love in our common humanity.

We have 1384 guests and no members online