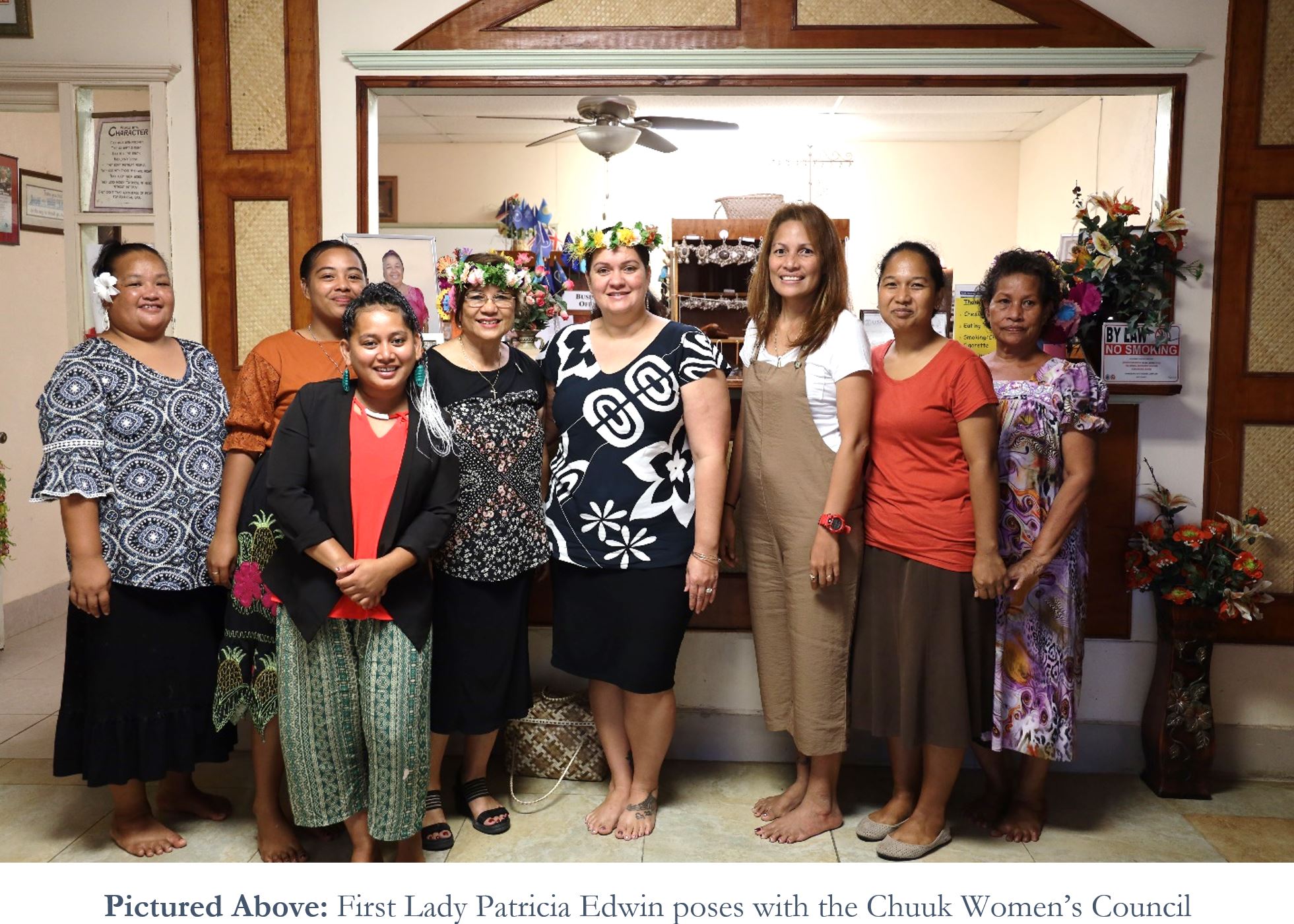 WENO, Chuuk—On November 26th, 2019 Patricia E. Edwin, First Lady of the Federated States of Micronesia (FSM), met with Christina “Kiki” Stinnett, President of the Chuuk Women’s Council (CWC), to discuss how the First Lady can assist in advocacy on issues of import to women and youth across the FSM. The discussion was largely exploratory in nature, and tackled issues including Human Trafficking awareness and prevention, a proposed shelter for women seeking safe-haven, and how to address the non-communicable disease (NCD) epidemic. The primary outcome of the meeting was the First Lady’s full support to commit to cooperating with CWC to promote the empowerment of women and youth.

First Lady Edwin has been a life-time advocate for women, youth, and improving support for individuals with disabilities. A Presidential Order signed by His Excellency David W. Panuelo to develop an Office of the First Lady ascribes to First Lady Edwin elemental support (such as office space and equipment—but NOT a salary) to promote and advocate on issues of import, such as the strengthening of the FSM’s implementation of the Individuals with Disabilities Education Act (IDEA), a U.S. law that assists schools in the FSM with special education programming, and other humanitarian initiatives.

Both First Lady Edwin and CWC President Stinnett discussed the issue of Human Trafficking in the FSM, which citizens may recall is an issue of increasing prevalence not only in the Pacific but across the world. First Lady Edwin and CWC President Stinnett—noting that women and youth are disproportionately the victims of such activity—discussed educational awareness programming, and brainstormed on how the FSM National Government might be able to assist CWC with its women’s shelter.

The CWC shelter has its soft opening on December 12th, 2019. It is hoped that the shelter will be able to offer counseling services from qualified professionals. CWC President Stinnett requested First Lady Edwin’s support for CWC to advocate for the Chuuk State Government to pass the requisite law, similar to one enacted in Pohnpei State, that enables greater clarity on domestic violence and the protection of women.

The FSM National Government has formalized its own avenue of tackling Human Trafficking via the development of an Anti-Human Trafficking division in the FSM Department of Justice, which is already active.

Another topic of discussion amongst First Lady Edwin and CWC President Stinnett was the NCD epidemic affecting the FSM. Approximately one out of every three citizens have a form of diabetes, often translated into local vernacular as “sugar sickness,” and a disproportionate amount of the Nation’s population is overweight or obese.

“Part of the issue is accessibility to healthy food at the local markets,” First Lady Edwin said. “It may be prevalent on the land, but if you go to the stores, you’ll find cans of processed food and white rice.”

Many Micronesians, who increasingly value efficient use of their time and limited financial resources in order to address their responsibilities at work and home, resort to white rice and canned meats as a means to feed large families.

CWC President Stinnett noted that CWC have a greenhouse project wherein women have access to seedlings to start their own family gardens. Further, CWC supports women in business wherein members gather once per month to sell locally made products and produce from said gardens.

First Lady Edwin noted that the Church of Jesus Christ of Latter-day Saints, through the FSM’s friend Elder Bill Davis (and member of the Area Seventy), is able to provide humanitarian assistance in the form of greenhouse produce. Similarly, First Lady Edwin’s and President Panuelo’s visit earlier in the month to the Pilot Farm operated by volunteers from the People’s Republic of China emphasized to the administration that the Nation may benefit from asking governmental development partners to assist in the expansion of mass-produce production.

“Healthy food must not only be plentiful, but must be so cost-effective that citizens choose it of their own volition,” First Lady Edwin said. “If we combine it with an education campaign on how to cook not only our traditional foods, but also global foods that are healthy and available, we start to limit the effects of NCDs across the country.”

First Lady Edwin and CWC President Stinnett also discussed the need to promote Micronesian culture, including traditional forms of Micronesian exercise and expression, in the Nation’s economy. Noting that the FSM National Government is developing a partnership with Okeanos Foundation for the Sea in an effort to bring back not only traditional navigation techniques, but also the construction of such vessels, into the FSM, allowing for more frequent transit to remote islands, it seemed reasonable to both First Lady Edwin and CWC President Stinnett that women can—and should—play a role in powering the Nation’s transition into an economy that combines traditional cultural expression and a means of generating familial revenue.

CWC President Stinnett described how CWC has a women’s clinic staffed by volunteer doctors, and engages in conservation efforts in partnership with Micronesia Conservation Trust (MCT). While these CWC initiatives are successful, CWC President Stinnett wondered if First Lady Edwin can assist in empowering FSM women across the country, particularly through the FSM Women’s Council.

“I look forward to a long and fruitful partnership together,” First Lady Edwin said. Both First Lady Edwin and CWC President Stinnett agreed that, as Micronesian women, they must stay true to who they are, practice humility in every way, and respect both one another and all they encounter.