The Federated States of Micronesia Celebrates the 75th Anniversary of the End of World War II, Calls for Empathy & Global Solidarity 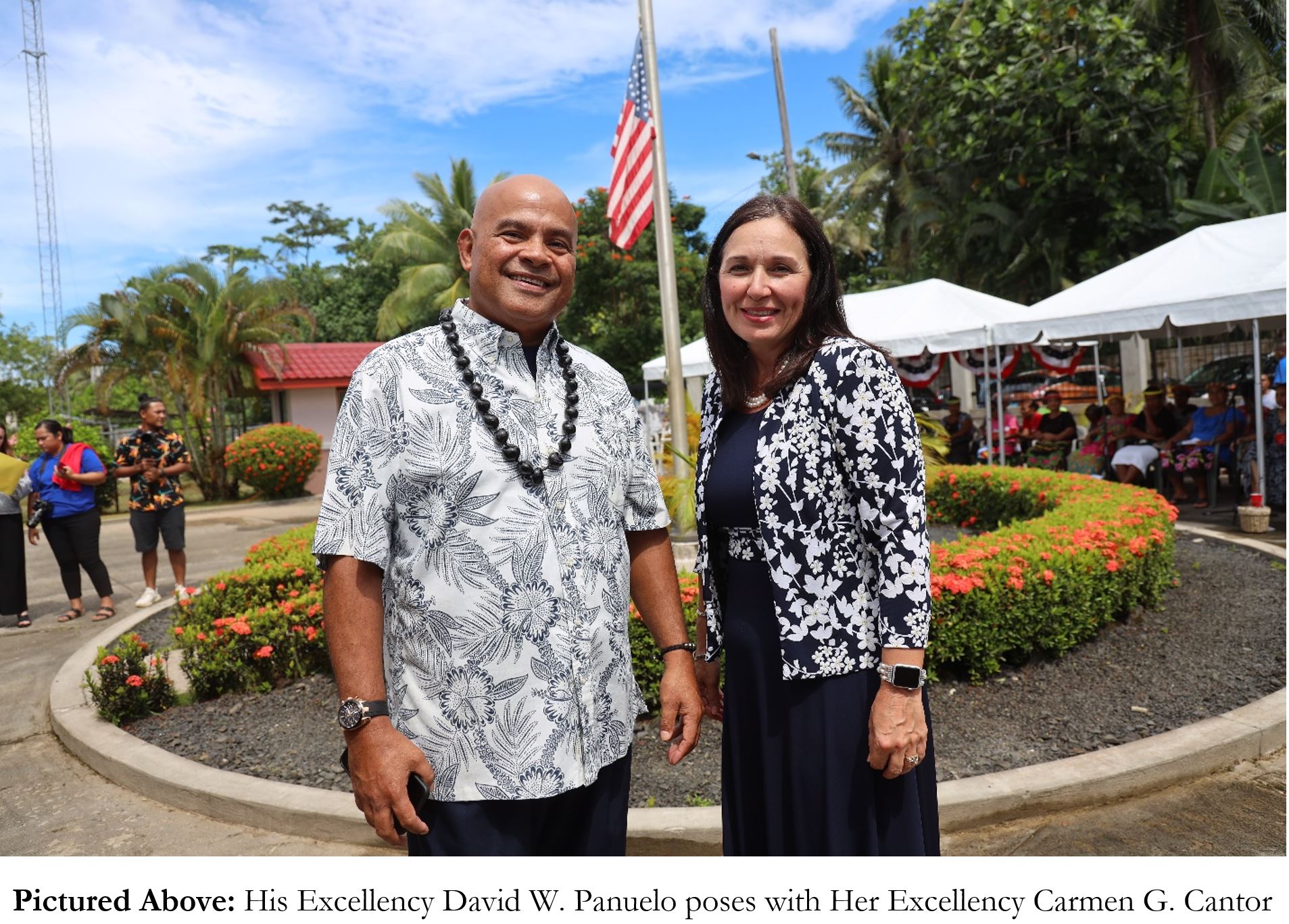 The Federated States of Micronesia Celebrates the 75th Anniversary of the End of World War II, Calls for Empathy & Global Solidarity

PALIKIR, Pohnpei—On September 11th, 2020, His Excellency David W. Panuelo—President of the Federated States of Micronesia (FSM)—joined traditional, political, and diplomatic leaders at the residence of Her Excellency Carmen G. Cantor, Ambassador of the United States of America to the FSM, in a celebration of the 75th Anniversary of the end of World War II and Pohnpei Liberation Day. The President’s address began by recalling his own memories of exploring World War II relics as a young boy, and evolved into a solicitation for all peoples and nations to practice empathy and embody peace with one another.

“It is a blessing that today Micronesians are joined by their American, Japanese, Chinese, and Australian friends alike,” President Panuelo said, “Because today we share enduring friendship and partnership, committed to peace, friendship, cooperation, and—most of all—love in our common humanity. It is the memory of our collective suffering that we recognize that empathy is strength—not weakness.”

The President extended special remarks to each of the Nation’s resident Ambassadors, highlighting that the FSM has exclusively positive relations with its neighbors and that such positivity ought to be a goal for all nations to aspire to.

Addressing His Excellency Hidenobu Sobashima, Ambassador of Japan to the FSM, President Panuelo said: “During my visit to Japan last October, to celebrate the Enthronement of His Majesty, the Emperor, I was most impressed with the peacefulness of Japan and the Peaceful Harmony of our Reiwa Era. While I read stories and history of a Japan that once knew war, the Japan that I know and have experienced is a Japan committed, and entirely devoted to, the promotion of peace and harmony amongst all peoples and nations throughout the world. It’s one of the reasons we truly support Japan becoming a new and permanent member of the UN Security Council. It’s why the FSM and Japan share a lasting special bond of Kizuna.”

Addressing His Excellency Huang Zheng, Ambassador of the People’s Republic of China to the FSM, President Panuelo said: “We also celebrate, today, September 11th, the 31st year of diplomatic relations with China. Our Great Friendship has developed over the years, and we have enjoyed a distinguished development partnership.”

Addressing the Honorable Vy Duong,chargé d'affaires of the Australian Embassy to the FSM, President Panuelo said: “We also thank Australia, because Australia was one of the proactive nations in helping the FSM achieve its independence when we were seeking self-determination.”

Addressing Her Excellency Carmen G. Cantor, Ambassador of the United States to the FSM, President Panuelo said: “Ambassador, I thought I would say a few words to give inclusiveness—because we all aspire for peace, security, and solidarity throughout the world. Today, we share an Enduring Partnership with the United States of America as codified through the Compact of Free Association. …Our young men and women voluntarily serve in the U.S. Armed Forces, and at the highest rates, and at great risk, to defend the principles of freedom, liberty, and democracy, at great potential cost to their own futures. It is unfortunate that some have paid the ultimate price; we honor their sacrifice, and pledge that their sacrifices shall never have been in vain.”

“Yet,” the President continued, “When I think of America, and Americans, I think of special individuals in my life. Individuals like David Rothgerry, who was an Assistant Professor at the Eastern Oregon University and a fatherly figure to Micronesians, instrumental in our human resource development. I think of Jim Stovall—even before we began negotiations with the U.S. in the first Compact, before 1986, Jim Stovall was one of those dedicated Americans in advising us legally on becoming a sovereign Nation. And, of course, I also think of the Peace Corps program, with individuals like P.F. Kluge who had a hand in drafting our Constitution’s Preamble.”

The President concluded by describing the importance of global solidarity, and the promotion and practice of empathy.

“Today, we are also celebrating the 75th Anniversary of the founding of the United Nations, and the reminder of the Second World War,” President Panuelo said. “What is needed in 2020 and beyond is World solidarity with one another. As we know in our hearts and have seen reinforced from our past, all human life is priceless and valuable. Empathy is not weakness—empathy is courage, and empathy is strength. It is through empathy, and a multilateral global community, that our World can overcome any challenge, including COVID-19 and Climate Change.”

We have 1531 guests and no members online