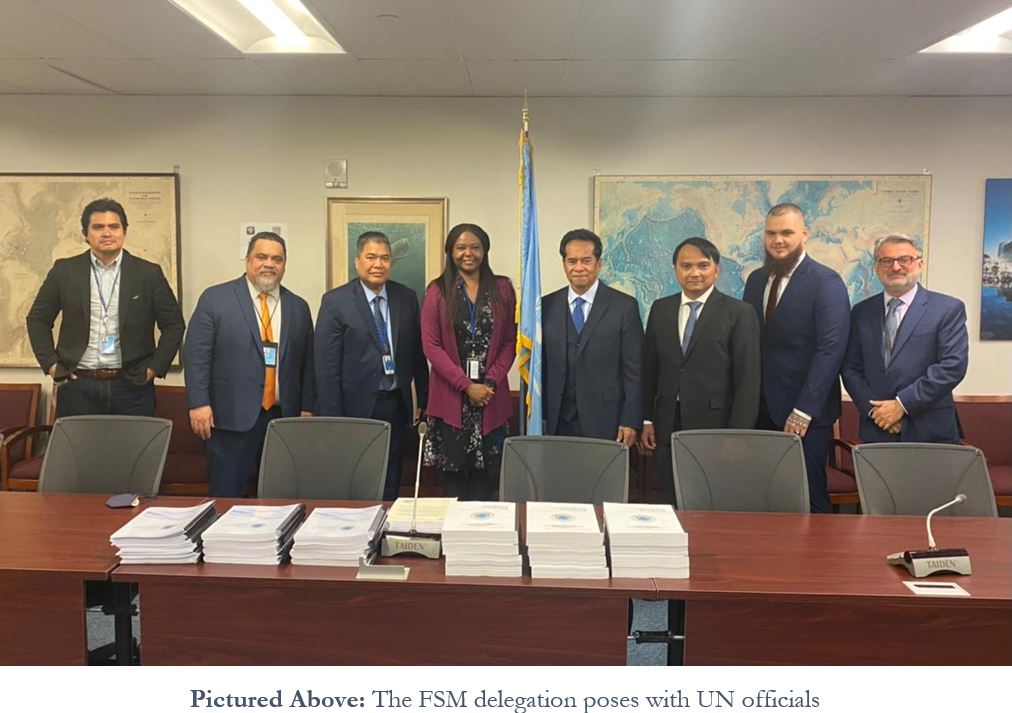 NEW YORK, NY—On April 22nd, 2022, the Honorable Joses R. Gallen Sr., Secretary of the Department of Justice of the Federated States of Micronesia (FSM), filed with the United Nations Commission on the Limits of the Continental Shelf a claim of an extended continental shelf covering a high-sea area of approximately 188,000 square kilometers (72,500 square miles) located in the North of Yap, pursuant to Article 76 of the United Nations Convention on the Law of the Sea (UNCLOS). Joining Secretary Gallen were the Honorable Jeem Lippwe, Deputy Permanent Representative of the FSM Permanent Mission to the United Nations, Chief of Law & Assistant Attorney General Leonito Bacalando Jr., Assistant Secretary for the FSM Cybersecurity & Intelligence Bureau, Mr. Adam Caldwell, and the FSM’s independent legal consultant, Mr. Clement Mulalap Jr.

The submission, put together by the FSM Continental Shelf Task Force, was made possible through a funding appropriation by the FSM Congress, designating H.E. David W. Panuelo, President of the FSM, as the allottee.

According to the practices by the United Nations Division for Legal Affairs and the Law of the Sea (DOALOS), the FSM’s claim will be posted for a period of ninety (90) days on its website, this being one of the tasks of the Secretary of the Commission on the Limits of the Continental Shelf. After this posting period, the FSM will be invited to formally present its claim to the Commission.

The FSM Continental Shelf Task Force guided the work of the technical team that analyzed the geological and geographical data, and drafted the technical and legal documents in support of the Nation’s claim. The Task Force is comprised of the Department of Foreign Affairs; the Department of Resources & Development; the Department of Justice; the National Oceanic Resource Management Authority; and the Office of National Archives, Culture, & Historic Preservation. The FSM National Government extends public recognition and appreciation to its consultants hired to assist the Task Force, Dr. Alain Murphy and Mr. Scott Sweet, a geologist and GIS expert respectively.

The FSM National Government is cognizant that other countries have lodged overlapping claims over the North of Yap Area i.e. the Republic of Palau and Japan. Palau and Japan have also lodged their respective claims, which were also received by the Commission. The FSM consulted interested countries prior to its filing on April 22nd, and to date no objection has been received. According to the Rules of Procedure of the Commission, a submission involving an overlapping claim may still be considered for as long as it is without prejudice to the question of delimitation of the continental shelf between States with opposite or adjacent coasts.

Regardless of any possible outcome involving this specific issue, the FSM National Government is resolved to ensure its diplomatic relations with Palau and Japan remain stronger than can be measured or described, as the FSM has a Kizuna (special bond) with the People and Government of Japan, and Palau is part of the family of sovereign Micronesian countries.

Continental shelves have been gaining increasing interest in recent years, and this is predicated on the premise that the seabed and subsoil in these areas could one day prove to be an important source of natural resources. Persons predisposed towards the utilization of monetizing these resources would describe that continental shelves, to potentially include the FSM’s claim in the North of Yap Area, could be host to numerous rare Earth metals, which are critical components for semiconductors, smartphones, solar panels, oil, petroleum, and other natural resources. It is the intention of the FSM National Government, however, to secure its claims in part so the FSM can ensure the territory is protected from deep-sea mining and other activity that poses the risk of providing economic benefit at the cost of environmental destruction.

“That’s why this claim is so important,” President Panuelo said in a statement. “Without this claim being made by the FSM, the rare opportunity to increase the FSM’s seabed territory under the UNCLOS might be lost permanently. This monumental accomplishment, using international law as a legal basis for extending the sovereign rights of our Nation to the high-sea areas, and the rich seabed resources thereof that rightfully belong to the present and future generations of citizens of the FSM. This submission is a concrete example of how we take actions today for our Nation’s prosperity tomorrow.”

We have 1729 guests and one member online