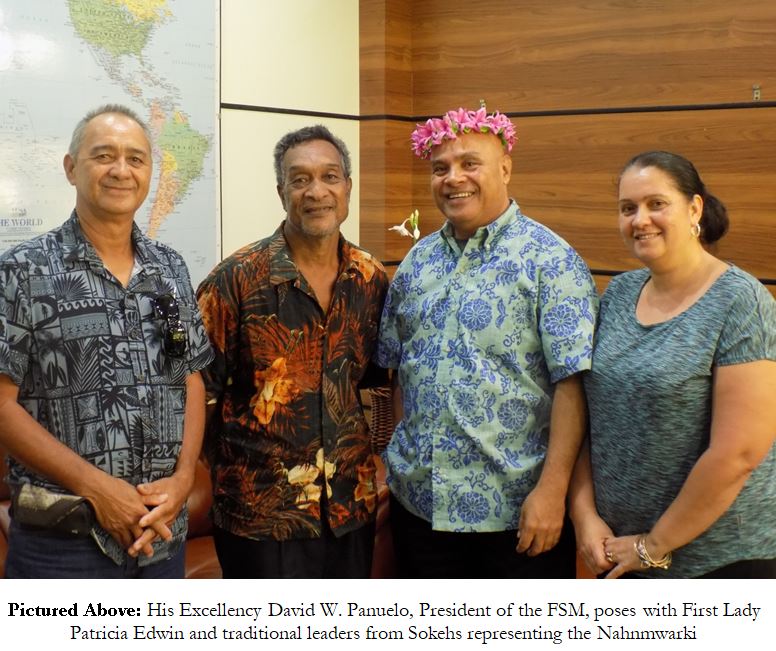 PALIKIR, Pohnpei—On June 13th, 2019, representatives of the Nahnmwarki of the Kingdom of Sokehs in Pohnpei State, Iso Nahlaimw and Soumaka Pikeniap, visited His Excellency David W. Panuelo, President of the Federated States of Micronesia (FSM), to bestow upon the President the traditional title of Luhk en Mwoalehlap.

“This is a great honor,” President Panuelo said. “I respect the traditions that comprise the foundation for this island, and the traditions of all the islands and States in our Federation. …As your President, I am still a public servant, and while I carry many responsibilities in this office, I work for each and every one of you.”

President Panuelo asked Iso Nahlaimw and Soumaka Pikeniap to express his gratitude to the Nahnmwarki of the Kingdom of Sokehs.

As the meeting was conducted in Pohnpeian, FSM Information Services advises that all quotations are translations into English, and apologizes if any nuance with regards to honorifics and high-level respectful language is lost.